Green Jackets. Magnolia Lane. A few keys on a piano, a few strings on a guitar. Jim Nantz. Pine needles. Azaleas. Amen Corner. The whack of a perfect tee-shot. Generations defined by those who won The Masters. 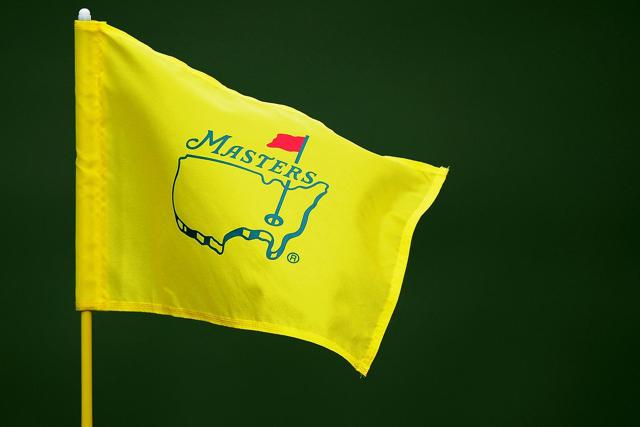 Golf's first Major tournament of the year is heavily steeped in tradition, and part of that tradition is that it is broadcast on CBS (CBS).

StockWaves has been bearish CBS since early 2017. The structure of the decline is messy, but as long as bounces remain corrective and under 60, we expect to see lower 30s. 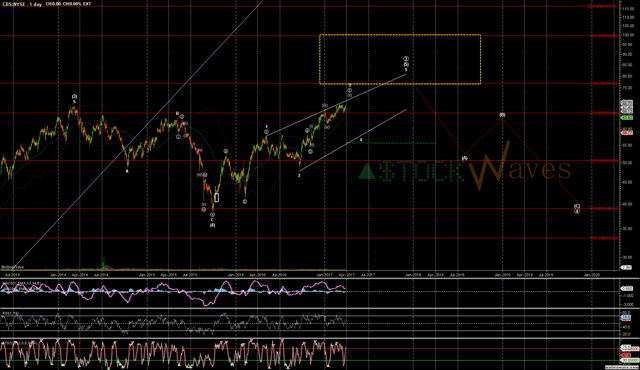 Below: Current CBS chart as discussed in the video.

Rather than discuss other broadcasting or media companies along with CBS in this video, I decided it would be more fun and in better spirit with The Masters to look at other golf and sporting goods names.

First up, Nike (NKE). Nike counts, similar to the broad market, with an Intermediate degree (5)th wave off the 2016 low completing a Primary degree 3rd. Unlike the market and CBS that have clearly confirmed the starts of the larger Primary 4s, NKE allows for further extension inside the 5th of that (5) provided support holds in the 75 region. While possible to extend as discussed toward 95 region, the risk certainly skews to the downside with the 50 region the target for Primary 4. That low will be a major long opportunity with a Primary 5 that projects to 140+ (>170%). And while talking about NKE, who can forget one of the MOST memorable Masters moments and possibly the best view of a swoosh ever... Tiger's chip-in on 16 in 2005. "Oh my goodness... Oh WOW!... In your LIFE have you seen anything like that?!"

Above: L/T NKE chart as discussed in the video.

Callaway Golf (ELY) also counts clearly as being well inside a larger Primary degree wave 4. The blue alt path does allow for higher in a (B) wave, but it has already retraced 38.2% in what can count as all of the (B) wave and might be ready to hit right into a water hazard.

Acushnet Holdings (GOLF) as a newer issue is at risk of falling further into the CABpIPO pattern, but if it can hold support cited for the green wave ii in the 22 region, it might prove to be one of the very few exceptions.

Next up is Drive Shack (DS), which is quickly emerging as a competitor with the popular TopGolf franchise. Interestingly, from a #sentiment standpoint, Topgolf is not publicly traded and only one of its four main investors is, and that is ELY. Even if DS struggles to gain market share from Topgolf who have the early advantage, it might benefit from investors using it as a proxy. It has been brought to my attention that the view of the DS chart in the video is not properly adjusted for a split, but since our focus was primarily on the price structure off the 2017 low, it does not make a difference. The 3.50 level is important support for the choppy bullish potential discussed.

Last, we looked at Dick's Sporting Goods (DKS), likely completing a corrective (B) wave as well up from the 2017 low. Ideal resistance is the 43.60 region and the ideal (C) wave target from there is 16.50.

Over the years, as a service at ElliottWaveTrader.net, Stock Waves has been guiding members with analysis of individual stocks with the expertise of three industry-leading technical analysts.

In January 2020, Stock Waves rolled out a service within Seeking Alpha’s Marketplace. In addition to our team of Zac Mannes, Garrett Patten, and Harry Dunn, we added Lyn Alden Schwartzer as a Stock Waves analyst to provide her fundamental analysis on individual stock opportunities we see in the coming years.

When it comes to fundamental analysis, Lyn's deep dives on individual stocks are second to none. Blending a background in engineering and finance, Lyn digs for value with a dispassionate, scientific approach that has been uncannily accurate in forecasting stock moves and trends.

Meanwhile, Zac, Garrett and Harry have for years applied a winning strategy developed by renowned Elliottician Avi Gilburt. This method of prognosticating movement in markets and stocks based on wave counts has resulted in consistent returns of over 65% in their earnings calls alone!

Having been providing our services to thousands of our members and hundreds of money manager clients at ElliottWaveTrader, we are excited to be able to bring this higher level of analysis of individual stocks to the Seeking Alpha audience as well.
Follow