With a two-year stock chart that looks like it was drawn by a seismometer, the volatility of Tesla (NASDAQ:TSLA) is one of a kind. In two years, there have been more than seven rallies between 15% and 40% with a sell-off to accompany each one. When observing stock charts, Seeking Alpha articles, YouTube videos, CNBC, or just the comment section of this article, it's obvious that the Tesla bulls and bears are having one of the biggest disagreements Wall Street has ever had. This video by Real Vision features many well-known bulls and bears such as Ross Gerber, Cathy Wood, Montana Skeptic and Mark Spiegel, among many others.

Some Investors Misinformed by Big YouTubers

I am on the bullish side of Tesla, but I am still very realistic. There are many who aren't including some with massive social media followings. I made a video, which you can see at the end of the article, in response to a video by Ben Sullins, a Tesla YouTuber with over 120k subscribers and a free Tesla Roadster Founders Edition under his belt. Ben Sullins' video called Tesla's sales results a "tremendous success" and stated that the company "destroyed the competition," but he used highly inaccurate sales information in his video. He used the chart below, which compares Tesla's global sales in Q1 with competitors' US-only sales in all of 2018. As the chart implies, he suggested that Tesla in just Q1 of 2019 outsold the competition in all of 2018. His video was viewed nearly 75k times in less than four days, which is a massive widespread of misinformation, so out of frustration, I made my response video below (which only has 1,000 views as of writing). 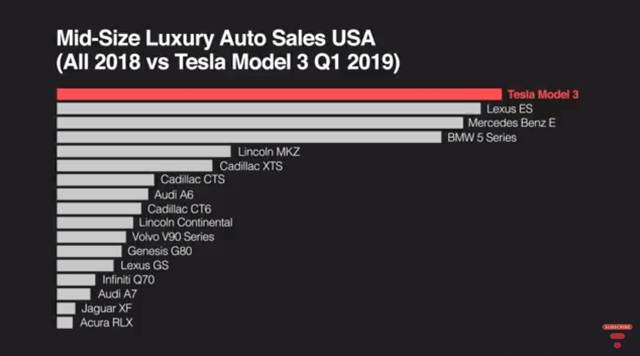 Chart by Ben Sullins (Which is not accurate)

Neglecting global sales is a big mistake. I live in Southern California where MINIs are a rarity, but globally the MINI brand by BMW Group (OTCPK:BMWYY) still outsold Tesla by more than 30% in 2018 with over 360,000 in global sales. When taking into account BMW's 5 Series and Mercedes E-Class vehicles, the chart should look like this:

A few weeks ago, Quoth the Raven wrote this article centered around the fact that many Tesla thought leaders and investors are out of sync with reality when it comes to investing with the company. He even used a conversation he had in the comment section of YouTube. As a Tesla fan, investor, and follower, I was really disappointed to see YouTubers with over 100k subscribers spreading misleading and inaccurate information about Tesla. When I saw Ben's video, I was inspired to do a response video, which you can find at the end of the article. A lot of viewers count on them for information, including some which are likely investors. In that respect, I (and many readers) am very thankful to Seeking Alpha, whose editors are very careful in making sure that content is accurate or at least appropriately sourced.

It's taken me a while to digest the results. While the results only have a minor effect on my long-term outlook on the company and has not caused me to sell any of my shares, it was still a big disappointment. Here is the report.

By far the biggest disappointment was sales of Model S and X, which were the worst in nearly three years at 12,100 units. A year ago, sales were 21,800 and in Q4 more than double. That's a steep drop off that can easily be explained by the removal of the 75kWh battery pack and global introduction of the Model 3. What's truly upsetting is that on January 30th in its update letter (aka Q4 earnings results), the company stated that it expects sales of Model S and X to be "slightly below" Q1 2018. Sales were down more than 40% and that letter came more than a month into the quarter; Tesla didn't bother to update investors, making the company look even more untrustworthy. It had many opportunities to update us (i.e. $35K Model 3 conference call) and that was a big blow to investors' willingness to trust any guidance by Tesla (such as its most recent affirmation of 360-400k units in 2019).

Another disappointment was the Model 3 production, which was still below 5,000 units per week (62,950/13 weeks, 4,840 per week). The Model 3 Tracker by Bloomberg, which was within 1% of predicting production for four consecutive quarters, even through Tesla's "production hell", was off by a staggering 26%. Quarter over quarter, production was up just 2.5%.

I believe that when it comes to the Standard Range and Standard Range Plus Model 3, demand will be strong. Likely strong enough to keep the factory busy for the next year, but whether Tesla can afford to make these cars is a mystery. As of writing, I don't think a single Model 3 Standard Range has been delivered yet. Many are fishing around for customers who have taken delivery, but with no confirmations. All I was able to find was Reddit users being offered discounts on upgraded models. In this particular post, the user claimed he was offered a $9,000 discount on a Long Range Model 3 with red paint, upgraded wheels and Autopilot. Of course, the legitimacy of these posts should be taken with a grain of salt; they could have been loaners or demos. Either way, it appeared to be a bait-and-switch effort to roll any inventory by the end of last quarter.

With that rant aside, I still feel pretty strong about the long-term prospects of Tesla. In my last Tesla article, I covered its direct-to-consumer sales model and called it a moat, as it is something no existing automaker could easily replicate. In fact, Hyundai (OTCPK:HYMLF) dealerships are the perfect example as the highly praised Kona EV is currently subject to dealer markups as much as $8,000 above MSRP. That makes it more expensive than a Model 3 Long Range and not a penny of that goes to the manufacturer. I've even heard that some dealerships across the country outright refuse to sell the Kona EV.

In other areas, Tesla's battery and powertrain technology continues to lead the way in efficiency. Not only does Tesla offer the best performance with electric vehicles, but it also offers the best efficiency. With gasoline-powered cars, efficiency only helps the manufacturers' reputation and customers' wallet at the pump. However, with electric vehicles, a more efficient battery and powertrain translates to fewer batteries needed to meet a desired range. A recent video by Sandy Munro goes into further detail and praises the electric motor by Tesla compared with the competition.

As an example, the $35,000 Model 3 uses a 50kWh battery that achieves 220 miles of range. The 62kWh Nissan (OTCPK:NSANY) LEAF gets a similar range, but requires a 24% larger battery. It is already suspected that Tesla has the greatest cost advantage in battery technology and this gives the company significant pricing power. After all, the $35,000 Model 3 is more affordable than the long-range Nissan LEAF, and most would agree that it is a superior car. Here are the fuel efficiency figures for the Model 3 Mid/Long Range, Nissan LEAF SV/SL and Hyundai Kona Electric:

This advantage also extends to the Model Y versus the upcoming and existing competition in the crossover EV segment. I have another video that covers the most important details of the Model Y linked here, but this simple slide from the video explains the advantages. When comparing the prices and range variances between the Model Y and competing EVs, Tesla is a clear winner. Now we just need the Model Y to arrive on time. 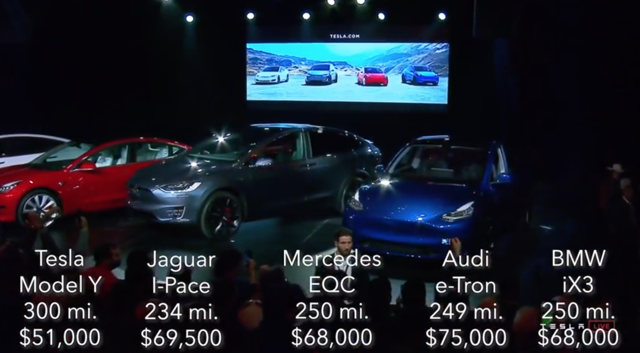 In the short term, there are still some sales catalysts that could help Tesla and the stock. Firstly, leasing is still not available for Model 3. Personally, I've leased every car I've driven in the last five years, so this would be a big must. In addition, Tesla could still bring back the Mid-Range variant of the Model 3 and sell it globally. This variant likely has a decent gross margin and could easily help in the short run. However, with a limited manufacturing capacity, it makes sense to stick with the premium models for as long as possible. So far, it's been a great success with Tesla setting records in many European countries, such as in Norway and Switzerland where the Model 3 was the most popular car in March. Finally, there's also the China Gigafactory that could come online by the end of the year. Many mention that it is a patch of mud, but this YouTube channel is consistently observing the progress with drones; the foundation looks complete and structures are already being built. How long it will take to complete and be up and running is still a big question, but this would be a big catalyst for sales in China due to reduced production costs and reduced tariffs.

While the sales results were a huge disappointment, I still feel strong about the long-term aspects of Tesla and see some catalysts that could help it recover in 2019. With such a volatile chart, anything could happen though. I am currently holding and would like to see what happens in the coming weeks with its autonomy event and earnings results before adding to my position. In the meantime, I will stick with options, and provided that the stock has had seven rallies of more than 15%, I think a run-up ahead of earnings is possible. Tesla's HW3 (upgraded computer chip) for Autopilot is now in production, and according to Elon Musk, it is able to accomplish the same task with a fraction of the effort. That unlocks new capabilities such as better utilization of the cameras (resolution) and additional computations that were formerly impossible. I'm very interested to see what Tesla will show at its Palo Alto event.

Sean Chandler
1.84K Followers
https://www.youtube.com/c/seanchandlerPassionate about technology and actively trade individual stocks and the SPY. My goal is to simply share my research and opinions. Readers must always come to their own conclusions.
Follow

196 Comments
To ensure this doesn’t happen in the future, please enable Javascript and cookies in your browser.
Is this happening to you frequently? Please report it on our feedback forum.
If you have an ad-blocker enabled you may be blocked from proceeding. Please disable your ad-blocker and refresh.