Investors and employees of Tesla, Inc. (NASDAQ:TSLA) and to a lesser extent, General Motors (GM), got excited this week with the introduction of legislation to extend the federal tax credit program for sales of qualifying new Plug-In Electric Drive Motor Vehicles and Fuel Cell Motor Vehicles. However, there are some problems lurking in the proposed legislation.

The Senate version S-1094, sponsored by Senators Debbie Stabenow (D-MI), Lamar Alexander (R-TN), Gary Peters (D-MI), and Susan Collins (R-ME) as read to the Senate is attached (here). This bill, in short, will extend the tax credit from 200,000 eligible vehicles to 600,000 eligible vehicles and then presents a reduced phaseout period of 6-9 months, depending on a manufacturer's timing in delivering unit number 600,000.

The tax credits for the first 200,000 vehicles are up to $7,500 and get reduced by $500 to a maximum of $7,000 for the next 400,000 units with this bill. This extension has no time limits attached. So, new manufacturers could certainly be encouraged to start new companies, knowing they have up to $4.3 billion in tax credits waiting to encourage customers to buy their new "green" vehicles. 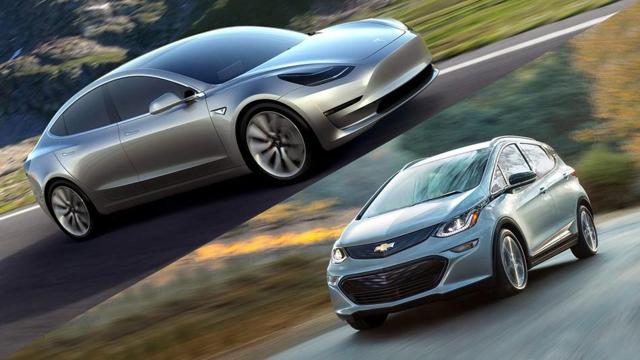 Tesla and GM are the big winners here

One critical point in the proposed legislation is the "Exclusion Period" as presented in section (C).

''(i) IN GENERAL.- For purposes of subparagraph (A), any new qualified plug-in electric drive motor vehicle manufactured by the manufacturer of the vehicle referred to in paragraph (1) which was sold during the exclusion period shall not be included for purposes of determining the number of such vehicles sold.

''(ii) EXCLUSION PERIOD. - For purposes of this subparagraph, the exclusion period is the period -

''(I) beginning on the first date on which the number of new qualified plug-in electric drive motor vehicles manufactured by the manufacturer of the vehicle referred to in paragraph (1) sold for use in the United States after December 31, 2009, is at least 200,000, and

''(II) ending on the date of the enactment of the Driving America Forward Act.

In simple English, what this means is any vehicles Tesla and GM have sold since hitting the magic 200,000 marks (first days of July 2018 for Tesla and sometime in 4Q18 for GM) do not count in the follow-on 400,000 units. That is great news for them!

But this creates a big problem for potential buyers until this legislation gets signed into law or rejected. Tesla and GM have seen their credits reduce in half to $3,750 in the phase-out period. Tesla will see their credits slashed to $1,875 on July 1st and likewise for GM on Oct. 1st. The above wording means today's buyers will not get the larger $7,000 credit unless they wait to buy until the bill is signed into law, and they can be one those next 400,000 buyers. A difference of thousands of dollars. The big question is will buyers hold off and wait? This is certainly more of a concern for Tesla as their EV sales have grown much more rapidly in the last few quarters. GM has taken quite a few years with just two qualifying models to reach the 200,000 limit.

The U.S. Treasury is the BIG loser!

In many of the press reports to date, and without listing the source, someone estimated the cost of this bill at $11.4 billion (here). But that is a tenth or less of what the total costs could become.

In another stroke of Washington genius, whoever wrote the original legislation did not put any limits at all on how many vehicles can be sold during the "phase-out" period. This bill does not correct that error, which means, for those months, where the credit remains elevated after 200,000 or 600,000 limits are hit (and later reduced by 50% for one quarter), the same manufacturers could theoretically deliver millions of units, getting tax credits for all of them by pumping up production during this period.

The list of supporters of this bill includes every major auto manufacturer in the world, GM, Tesla, Toyota Motor Corp. (TM), Ford Motor Co. (F), Fiat Chrysler Automobiles (FCAU), Honda Motor Co. (HMC), BMW AG (OTCPK:BMWYY), Nissan Motor Co. (OTCPK:NSANY), and Volkswagen Group (OTCPK:VWAGY), and many others. You know, in short order, many Chinese EV manufacturers would be hitting U.S shores with their offerings. Even electric utilities are supporting this bill. Why not? All of the electricity to power these millions of vehicles has to come from somewhere.

Even worse, at this point, there is no end date for this giveaway program. So, new entrants into EV manufacturing for years to come could participate as well. Internal Revenue Code of 1986 Title 26, Section 30D, subsection (e) (here) is the area of the Code covering this program. As you can read, no exclusions for foreign manufacturers or timetables other than a start date were written into the tax code.

So, the final costs to the U.S. Treasury and, eventually, the taxpayers, could easily end up over a hundred billion dollars.

As much as I would personally like to see this legislation passed since our fund has holdings in several automakers including GM, I cannot see this legislation getting through the Senate and signed by President Trump. The costs could be insanely high producing little, if any, benefit for the majority of our citizens.

But until this legislation is voted either up or down, it could give buyers, especially for Tesla, pause in making purchases at this time.

I do, however, strongly support subsidies for the budding EV and fuel cell industries here in the U.S. But there have to be better ways to encourage EV purchases without a huge bonanza to those more affluent members of our society. So, investors in these and other automakers should not be counting on this bill passing and need to be aware of the potential disruption to sales that could occur in the short term.

Donn Bailey
3.46K Followers
Donn is Co-Manager of his family-controlled investment portfolio of mortgages, real estate, and publicly traded stocks. Donn grew up in Mexico and Ecuador before moving to the U.S. for college. He holds a Bachelor's degree in Business Management. He spent a decade in the aerospace industry before his passion for cars took him to GM and Ford dealerships. An avid ocean fisherman, he "semi-retired" to Florida in 2015. Never idle, he stays busy now as a licensed realtor and author on the real estate and auto industries.
Follow

Disclosure: I am/we are long GM. I wrote this article myself, and it expresses my own opinions. I am not receiving compensation for it (other than from Seeking Alpha). I have no business relationship with any company whose stock is mentioned in this article.

335 Comments
To ensure this doesn’t happen in the future, please enable Javascript and cookies in your browser.
Is this happening to you frequently? Please report it on our feedback forum.
If you have an ad-blocker enabled you may be blocked from proceeding. Please disable your ad-blocker and refresh.