Two years ago, I wrote an article comparing the differing strategies of EastGroup Properties (NYSE:EGP) and STAG Industrial (NYSE:STAG). Both REITs focus on industrial properties in secondary markets, but they take a very different approach.

EGP develops new buildings, constructed to be convenient for modern equipment and techniques. This strategy allows EGP to attract tenants with large budgets and charge higher rental rates. It has also allowed the company to sell buildings at prices substantially higher than their cost of construction and recycle those proceeds into future development. However, development has its own risks, including occupancy risk, oversupply, geographic concentration and having a significant amount of capital tied up in properties that are not currently producing income.

STAG focuses on acquiring properties that are already 100% occupied. These are generally older properties that are not optimized for modern equipment, but are "good enough" for tenants that want to save on rent or for smaller tenants who don't need all the amenities of a modern warehouse. The benefits include instant and known cash flow immediately following the investment, very little capital tied up in non-income-producing properties and significant geographical diversification. The downsides include a higher churn rate as tenants outgrow their location, flatter rents as newer buildings are completed, and older vacant buildings are often sold at a discount to the original purchase value.

Two years later, how have things panned out?

On May 2, 2017, EGP was trading around $78 and STAG was trading around $26.50. In terms of share price, EGP has crushed STAG. Both tickers are trading near all-time highs, with EGP appreciating over 46% and STAG just under 14%. Naturally, we have to consider dividends as well.

Over the last two years, EGP has had a total return that is approximately 24% higher. In terms of income, EGP would currently be producing $390 per year and STAG would be producing $597 per year. EGP closed the gap with its much larger dividend raises but still pays substantially less yield on capital than STAG. 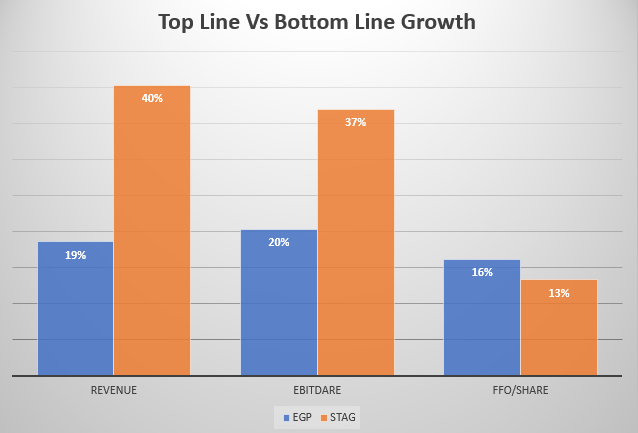 This chart shows growth from Q4 2016 through Q4 2018. STAG has thrown up impressive top-line growth with revenues increasing 40% and EBITDAre up 37%. However, despite top-line growth at nearly double EGP's, STAG's per share FFO lags.

The reason for this is that STAG has been heavily reliant on dilution, trying to grow for the sake of growing. Consider 2018:

In 2018, STAG has $676.5 million in acquisitions at a 6.9% cap rate, which means those properties can be expected to produce approximately $46.68 million in annual NOI.

Removing all the costs, acquiring $676.5 million in properties will increase STAG's annual cash flow approximately $6.68 million, or $0.05/share. This is why STAG is growing the top line at a very quick rate, but very little is showing up in the per/share metrics.

Performing the same exercise for EGP, the company invested $167.67 million in development, which is expected to yield 7.1-7.8%, I assumed it achieves only 7.1%. For its acquisitions, I assumed a conservative 6% and assumed 6.1% for dispositions.

EGP actually had approximately a $2.49 million decline in net debt for a small interest savings. The company issued 1.74 million common shares paying a dividend of $5.02 million.

STAG is growing quickly, but that growth is extremely inefficient for shareholders.

The efficiency gap expands even more when considering SSNOI (Same-Store NOI). STAG has routinely underperformed its peers over the last three years reporting SSNOI growth of 1.8%, 0%, and 1.3%. Meanwhile, EGP reported SSNOI growth of 3.1%, 2.8%, and 3.8%.

The primary reason that STAG trails its peers so substantially in SSNOI growth is that it almost exclusively buys fully occupied properties. Over time, occupancy is going to trend down to average around 95%. The $46.68 million in new NOI that STAG is getting from 2018 acquisitions is at 100% occupancy.

EGP is old enough to have been tested in the last recession. 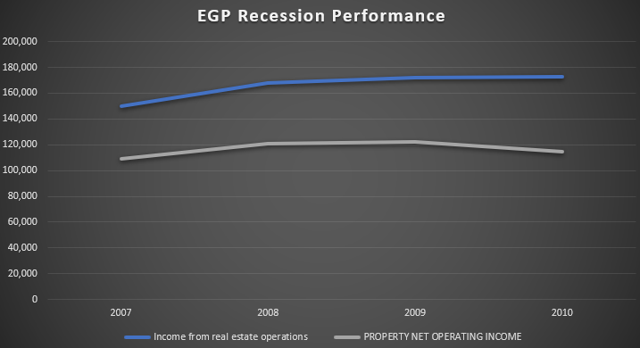 EGP's response last recession was to pull in its horns. Development and acquisition expenditures declined to $33 million in 2010, down from $170 million in 2007. That halted growth, but property NOI held up, declining only 5.2% from its peak in 2008.

EGP was able to coast through the recession, waiting for the opportunity to restart its development programs. FFO/share declined from $3.30 in 2008 to $2.86 in 2010, easily allowing it to maintain its $2.08 dividend without having to increase debt.

How will STAG perform through a recession? We can only speculate. On the plus side, STAG has significant diversification, low property level expenses and a very healthy balance sheet with low leverage. On the negative side, its SSNOI already has a strong downward bias during boom times, it only has 73 employees managing properties (390 buildings across 37 states), and its buildings are older.

Given STAG's difficulty in creating meaningful per/share growth during good times, there is little reason to be optimistic that it can prevent significant declines during bad times.

EGP has run circles around STAG in every return metric except for the size of the dividend stream. Its performance can primarily be attributed to a strategy that is substantially more controlled and efficient.

STAG is investing a lot of money, but is getting very little net cash flow. Since it is primarily relying on equity for investments, its high dividend is eating away most of the gain from new investments.

STAG's struggling SSNOI is directly attributable to its strategy of buying fully occupied properties. Over time, the averages work out and those properties will have declining occupancy. This puts additional pressure on the already slowly growing cash flow.

For investors who are solely focused on income, STAG has been a decent investment. With opportunities to invest at 5-6% yields, STAG provides much higher income than most of its industrial peers. However, with virtually no dividend growth and modest FFO/share growth being funded by massive amounts of new equity, even the income is not so spectacular when compared to non-industrial peers.

Investors should be concerned about the stability of STAG's model in a recession. It has relied on issuing massive amounts of equity, so declines in share price would have a significant impact on the company's ability to expand at all. Without new acquisitions, the downward occupancy trend would be more keenly felt. If STAG stopped acquiring tomorrow, its FFO would trend down as vacancies rise and FFO/share would drop even faster as the full effects of the latest share issuances were absorbed. That would occur even if we did not assume a deteriorating economy and a decline in the natural occupancy rates.

With shares trading at all-time highs for both companies, EGP is an investment that could be held. It has a solid track record of growth and is able to issue equity at very attractive prices. If a recession comes, the company will do what it has done before, stopping its development and coasting until conditions improve. It is very unlikely its dividend would be at risk. With a payout ratio of 58%, the company has plenty of cushion.

Right now is likely an excellent time to take profits with STAG. Due to the inefficiency of its model, STAG has to invest increasingly large amounts of cash in order to receive modest growth. The company will struggle to continue providing 5% FFO/share growth even if the boom times continue. The dividend is safe for now, but in a recession, it could come under significant pressure.

Previously, I have been sympathetic to investors commenting that STAG was their choice due to the higher income and are willing to give up the capital return potential. Yielding 6-7%, it was a relatively safe income option in a fast-growing sector. As industrial valuations have been pushed up and STAG's dividend growth has failed to keep up, it has become a much less viable investment choice for income investors. There are numerous investments with better yields, better growth prospects, and more likely to sustain through a recession.

High Dividend Opportunities, The #1 Service for Income Investors and Retirees

We are the largest community of income investors and retirees with over 2200 members. We recently launched our all-Preferred Stock & Bond portfolioto cater for conservative income investors.

Join Us Today Before Price Increase! Due to high demand, our membership rates will increase soon. Join us today and beat the price increase! You get instant access to our model portfolio targeting 9-10% yield, our preferred stock portfolio, and income tracking tools. You also get access to our report entitled "Our Favorite Picks for 2019". 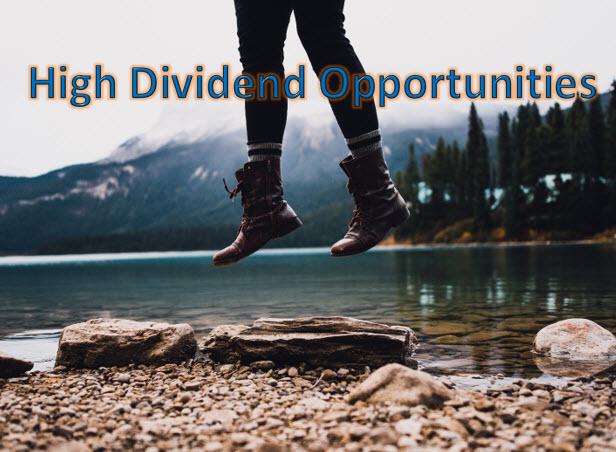 Beyond Saving
4.91K Followers
Author of High Dividend Opportunities
The #1 Service for Income Investors and Retirees, +9% dividend yield.
As a professional in commercial real estate, my investment focus is on REITs. My goal is to provide detailed research on the properties being acquired and sold by REITs, as the quality and value of the real estate purchased by a REIT has an impact on the long term health of a REIT.