There are no extreme "fixes" to secular declines in sales, profits, employment, tax revenues and asset prices.

The saying "never let a crisis go to waste" embodies several truths worth pondering as the stock market nears new highs. One truth is that extreme policies that would raise objections in typical times can be swept into law in the "we have to do something" panic of a crisis.

Thus, wily insiders await (or trigger) a crisis, which creates an opportunity for them to rush their self-serving "fix" into law before anyone grasps the long-term consequences.

A second truth is that crises and solutions are generally symmetric: a moderate era enables moderate solutions, crisis eras demand extreme solutions. Nobody calls for interest rates to fall to zero in eras of moderate economic growth, for example; such extreme policies may well derail the moderate growth by incentivizing risk-taking and excessive leverage.

Speculative credit bubbles inevitably deflate, and this is universally viewed as a crisis, even though the bubble was inflated by easy money, fraud, embezzlement and socializing risk, and thus, was entirely predictable.

But what if the current speculative credit bubbles in junk bonds, stocks and other assets don't crash into crisis? What if they deflate slowly, losing value steadily but with the occasional blip up to signal "the Fed has our back" and all is well?

A slow, steady decline is precisely what we can expect in an era of credit exhaustion, which I've covered recently ("The Coming Global Financial Crisis: Debt Exhaustion"). The central bank "solution" to runaway credit expansion that flowed into malinvestment was to lower interest rates to zero and enable tens of trillions in new debt. As a result, global debt has skyrocketed from $84 trillion to $250 trillion. Debt in China has blasted from $7 trillion 2008 to $40 trillion in 2018.

A funny thing happens when you depend on borrowing from the future (i.e., debt) to fund growth today: the new debt no longer boosts growth, as the returns on additional debt diminish. This leads to what I term credit/debt exhaustion: lenders can no longer find creditworthy borrowers, borrowers either don't want more debt or can't afford more debt. Whatever credit is issued is gambled in speculations that the current bubble du jour will continue indefinitely - a bet guaranteed to fail spectacularly, as every speculative credit bubble eventually implodes.

As expanding credit no longer generates real-world growth, growth slows. Over time, marginal borrowers default as revenues and profits erode, and this triggers a corresponding erosion in employment and wages.

This erosion is so gradual, it doesn't qualify as a crisis, and therefore, central banks can't unleash crisis-era fixes. Not only do they lack the political will to launch extreme policies in a moderate decline, it would be unwise to empty the tool bag of extreme fixes at the first hint of trouble; what's left for the crisis to come?

There are no extreme "fixes" to secular declines in sales, profits, employment, tax revenues and asset prices. Moderate stagnation will not be reversed with moderate fixes (lowering interest rates a quarter of one percent, etc.), and any attempt to institute extreme policies will expose authorities' desperation right when confidence is vulnerable to collapse.

The Fed and other central banks are trapped in more ways than one. 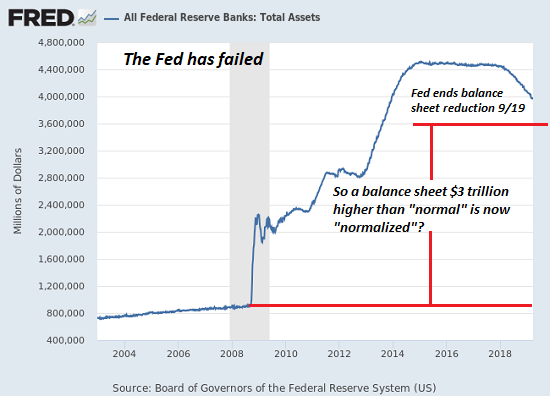 Charles Hugh Smith
4.35K Followers
Charles Hugh Smith writes the Of Two Minds blog (www.oftwominds.com/blog.html) which covers an eclectic range of timely topics: finance, housing, Asia, energy, longterm trends, social issues, health/diet/fitness and sustainability. From its humble beginnings in May 2005, Of Two Minds now attracts some 200,000 visits a month. Charles also contributes to AOL's Daily Finance site (www.dailyfinance.com) and has written eight books, most recently "Survival+: Structuring Prosperity for Yourself and the Nation" (2009) which is available in a free version on his blog.
Follow
14 Comments