Update, April 17, 2019, 3:40 p.m.: References to the Camry Hybrid LE and XLE have been corrected from a previous version, which incorrectly referred to 4- and 6-cylinder versions.

When I started writing about energy storage investments in July 2008, the politically compelling arguments for vehicle electrification included increased national security from energy diversification, reduced CO2 emissions, and sanctuary from the tyranny of imported oil. Today, the US is the world's top oil producer, its energy-related CO2 emissions have fallen by more than 10%, oil prices have fallen by more than 50%, and none of the gains were EV related. These days, the only plausible justification for vehicle electrification is reduced CO2 emissions, but that justification is more smoke and mirrors than substance.

Since investing in smoke and mirrors is rarely successful in the long term, this article highlights the grave intellectual flaws in sustainability myths fabricated by Tesla (NASDAQ:TSLA) and explains why its long-range Model 3 has a heavier CO2 footprint than Toyota's (TM) humble but highly efficient Camry Hybrid.

The long-range Model 3 and the Camry Hybrid are both classified as "mid-size cars" in the US and "D Segment cars" in Europe. My first table summarizes the salient details.

One can quibble over differences in fit, finish, and zero to 60 acceleration, but the two cars are in the same vehicle class.

I've always been amazed at the way politicians, ideologues, dreamers, and other electric vehicle hucksters, or EVangelicals, insist on:

Calculating the CO2 footprint of a Toyota Camry Hybrid

The CO2 emissions for a Toyota Camry Hybrid are simple to calculate. According to the U.S. Energy Information Agency, burning a gallon of gas produces 8,890 grams of CO2. Since the process of producing, refining and transporting petroleum products is roughly 80% efficient, the well-to-wheels value is 11,113 grams of CO2 per gallon. According to their EPA window stickers:

Calculating the CO2 footprint of a Tesla Model 3

The CO2 emissions for a Tesla Model 3 are more challenging to calculate because an accurate assessment of costs and benefits must account for:

Unfortunately, the assumptions people make while performing the necessary calculations can and do vary widely. It's not so much a case of "figures don't lie, but liars figure" as a situation where "a man hears what he wants to hear and disregards the rest." 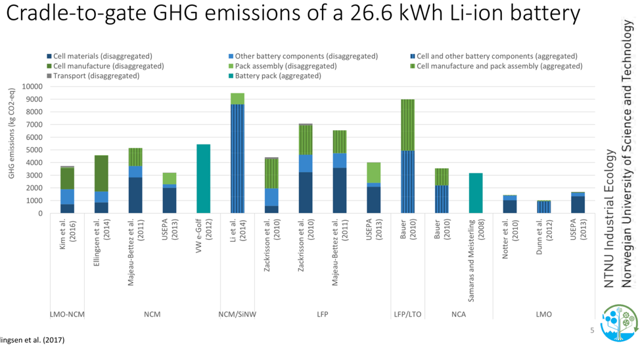 Under the circumstances, I view the Kim and Ellingsen studies as highly credible. Since the raw materials for NCA cathodes have a 20% higher CO2 footprint than the raw materials for NMC cathodes and NCA batteries have a 20% higher energy density than NMC batteries, I believe an estimate of 170 kilograms per kWh for NCA batteries is quite reasonable. While I would rather have a detailed analysis from Tesla, squeezing that much information into a 280-character tweet is tough.

For this article, I have assumed that Tesla's batteries will have a calendar life of 12 years or 1.5x Tesla's eight-year warranty period and an average Model 3 will be driven 12,500 miles a year for a total of 150,000 miles before a replacement battery is required. This assumption will be proven wrong when a statistically valid sample of Model 3 batteries have reached end-of-life in the hands of typical Model 3 owners. While I think my assumptions are generous, others may consider them overly conservative. I'm happy to let each reader decide for himself.

When you turn the crank on my assumptions, the amortization required to recover the cradle-to-gate CO2 emissions for the battery in a long-range Tesla Model 3 is 85 grams per mile.

Emissions from producing electricity and charging batteries. One of the most hotly debated topics in the EV space is "how should we account for greenhouse gases associated with producing and distributing the electricity used to charge EVs?" Critics grouse that, "EVs are powered by coal," while EVangelicals proclaim that, "EVs are powered by wind and solar." Academics and bureaucrats frequently use an average emissions intensity for a particular city, county, state or country. Since all these assumptions ignore reality, I believe they're all deeply flawed.

I created the following graphs from electric-power production data for April 15, 2019, that I downloaded from CAISO's Renewables Watch web page. As you study the graphs, the key points to remember are:

While graphs are great when you want to visualize the big picture, it's hard to beat numbers when you want to grasp the nitty-gritty. So, I've summarized critical hourly data for each class of generating assets in this table which states power in MW and energy in MWh.

The key points I noticed include:

As you ponder the graphs and the table, bear in mind that the simple act of plugging an EV into a wall socket is a consumption decision. Since the grid can't store power and utilities must precisely match supply and demand from moment to moment, every consumption decision requires the utility to make a corresponding production decision.

If you give the graphs and the bullet points a few minutes (or hours, days or weeks) to sink in, the following factual statements become self-evident and incontrovertible.

The following table summarizes the calculations necessary to roll this number forward from the power plant to the open road in a long-range Tesla Model 3.

I was surprised when this analysis showed that Tesla's long-range Model 3 has a 24% heavier CO2 footprint than the Camry Hybrid LE and a 12% heavier CO2 footprint than Camry Hybrid XLE. I'm certain readers will be shocked because my conclusion is 180 degrees out of synch with Tesla's sustainability mythology. Frankly, there's simply no reason for investors, politicians or governments to support vehicle electrification if EVs offer no appreciable environmental benefit.

The analysis in this article probably won't have an immediate impact on Tesla's stock price because popular myths are macro issues that take time to percolate through the collective consciousness. It may, however, impact politicians who need to decide whether it makes sense to spend taxpayer money to subsidize adult toys that offer no environmental benefits. It may also impact the portfolio management decisions of responsible fund managers who are willing to question their assumptions instead of embracing a three-monkeys approach to investment management.

The mental image of cheap and sustainable electric drive promoted by politicians, ideologues, dreamers, and other electric vehicle hucksters is alluring beyond reckoning. It's also a classic free lunch fairy tale and those never end well for investors because there is no free lunch.

I continue to believe that Tesla's intrinsic investment value is zero and its stockholders will ultimately lose all their money. I cannot predict, however, when a significant portion of market participants will begin to see, hear and speak the unpleasant and inconvenient truths.

Many commenters have criticized this article for failing to plumb the depths of battery manufacturing in a Camry Hybrid. This graph from Page 8 of a 2012 UCLA study that was commissioned by the California Air Resources Board shows why. Once you take the BEV’s battery out of the equation, CO2 emissions from vehicle manufacturing are essentially the same for an ICE, an HEV, and a BEV. In my view, the clarity of the current simplified discussion outweighs any incremental accuracy from discussing everything but the kitchen sink. 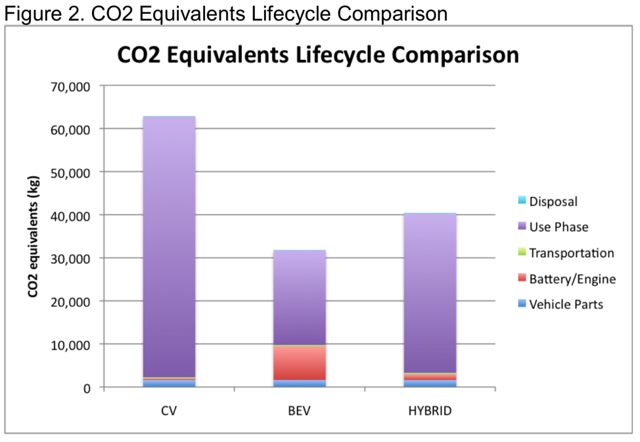 Disclosure: I am/we are short TSLA TROUGH LONG DATED PUT OPTIONS. I wrote this article myself, and it expresses my own opinions. I am not receiving compensation for it (other than from Seeking Alpha). I have no business relationship with any company whose stock is mentioned in this article.