At the beginning of April, US-based hedge fund Citadel, run by Ken Griffin, opened a short position in Ireland-based low-cost airline Ryanair (NASDAQ:RYAAY). Those of you who follow me know that I have been bullish on the airline since last year. While my position is in red at the moment, I believe that Citadel is making a mistake of shorting Ryanair at the current market price, and I think that the company's stock has a potential to rebound in the foreseeable future.

Ryanair continues to be the biggest low-cost carrier of Europe that offers the most attractive fares among its competitors. In Q3, Ryanair's average fare was €39, 18% less from its closest competitor Hungarian-based airline Wizz Air (OTCPK:WZZAF). Below is the table that shows the average fare of other low and mid-cost airlines of Europe. Being the cheapest airline on the continent, while at the same time having the biggest coverage in Europe, puts Ryanair in a winnable position in this turbulent environment, as there's always going to be a demand for its flights. Ryanair's current slogan is: Low Fares. Made Simple. 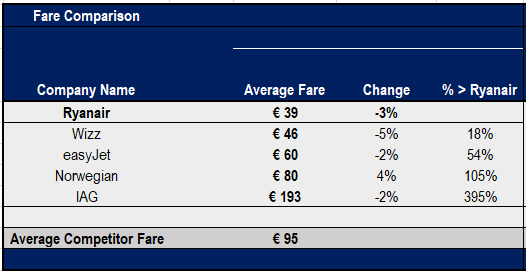 Source: Ryanair. The table was created by the author.

According to ACI Europe, more than 2.34 billion people travelled by air in Europe in 2018, which is an increase of 6.1% Y/Y. Europe remains to be an attractive market for air travel, and I believe that Ryanair is the airline that benefits the most from such a growth.

At the moment, Ryanair conducts its operations in 234 airports across Europe, North Africa, and Near East. It has 84 bases in EU and more than 2,100 routes. To cover such a wide network, Ryanair has more than 450 Boeing (BA) 737-800 planes, which have an average age of less than 7 years.

To strengthen its competitive advantages, Ryanair has already ordered 210 new 737 MAX-200 planes, 50 of which are expected to be delivered throughout this year. As a result, the airline expects to have more than 580 planes by 2024, the majority of which are going to be more fuel efficient in comparison to its current fleet.

In March, Ryanair reported successful Q3 earnings results, which beat the analysts' estimates. Revenues were €1.53 billion (~$1.72 billion), up 9% Y/Y, while the traffic has also increased by 8%, as the airline managed to transport close to 33 million passengers. Despite having the lowest fares, Ryanair is extremely efficient budget airline, as its operating and net margins are 19.47% and 14.69%, respectively. The company expects to make around €1.0 billion (~$1.12 billion) to €1.1 billion (~$1.24 billion) in profits in FY19, while traffic is expected to rise to 142 million passengers, up 9% Y/Y.

Considering all of this, I believe that it is foolish to short Ryanair's stock at the current market price, especially since shares are already down ~31% from its 52-week high. Ryanair is the leader of European air travel and I believe that it will be able to maintain its strong position on the market, thanks to its ability to offer cheap flights and still make relatively high margins.

There are two major risks that I see that can disrupt Ryanair's day-to-day operations in the short term. The first risk is the company's inability to quickly recognize various unions across Europe, which leads to strikes and flight cancelations. Ryanair's current business model heavily relies on aggressive expansion across different cities, sometimes at the expense of its employees. In 2017-2018, there were numerous pilot and cabin crew strikes across Europe that led to flight delays or cancellations. As a result, Ryanair was forced to recognize its first-ever union in its history in the summer of last year. After that, the company recognized a number of other unions from different EU countries, but it was too late, as the damage has been made, and Ryanair decreased its guidance for the fiscal year that ended in March. However, throughout this calendar year, we have not seen any major strikes yet, and I'm sure that the management has finally figured out a way of how to deal with unions without giving them too much power, while, at the same time, making sure that day-to-day operations are not disrupted and the costs are in line with the expectations. Although, I'm sure that various union problems will continue to emerge, as workers from different European countries don't have their own representatives that could directly negotiate with Ryanair, and as a result, we could see more strikes and flight cancellations in the foreseeable future, if both sides will not be able to agree on various issues.

In addition, the current European political environment also has an effect on Ryanair's operations. Last month, before the extension of Article 50 was announced, the airline was prepared to face a no-deal Brexit and approved a contingency plan that, in an event of a hard Brexit, restricts its UK-shareholders of voting rights in order to keep its EU license. Since Brexit is extended and lawmakers from both sides have a few months to sort out various political and economic issues, the management of Ryanair could finally focus on the operational side of its business and not worry about the inability of bureaucrats from EU and UK to reach a deal.

To conclude, Ryanair is not a perfect airline. However, while those two risks that I've outlined above pose a threat of disruption to the airline's day-to-day operations, I still believe that Ryanair's competitive advantages outweigh the downside. Thereby, I continue to own Ryanair shares and expect a rebound of its stock in the foreseeable future.

Aleksey Razdolgin
1.73K Followers
Aleksey is CEO of the proprietary trading company Arbitrage Trades. Aleksey is in charge of creating new opportunities in this rapidly growing investments field. He is personally investing his own money into stocks, cryptocurrencies and other emerging trends of the financial industry.

Disclosure: I am/we are long RYAAY. I wrote this article myself, and it expresses my own opinions. I am not receiving compensation for it (other than from Seeking Alpha). I have no business relationship with any company whose stock is mentioned in this article.