While preparing a chart of upcoming auctions of Treasury Inflation-Protected Securities a few weeks ago, I noticed something odd: The Treasury had scheduled a 5-year TIPS reopening in June, in the spot normally reserved for a 30-year TIPS reopening.

Was it a typo? Or was the schedule changing? An alert reader also noticed this change and pointed to this wording on an obscure page of TreasuryDirect:

This was a variation from the schedule the Treasury has maintained since April 2015: a new 5-year TIPS issued in April and reopened in August and December. Before 2015, there were only two 5-year TIPS auctions a year, in April and October.

This is how the new 5-year TIPS schedule will work, according to a Treasury press release issued on October 31, 2018 (but apparently read by almost no one, since it has never been covered in the media):

Treasury will introduce a new October 5-year TIPS maturity starting in 2019. TIPS market participants are broadly supportive of this change, and have indicated that an additional October 5-year maturity would balance the TIPS calendar in a manner that improves the market’s ability to price the seasonality of CPI into the TIPS curve, which could lower TIPS volatility and Treasury’s issuance cost overall.

The Treasury seems to have an indifferent view toward 30-year TIPS: It stopped auctioning them entirely from October 2001 to February 2010. (This was unfortunate for investors, because 30-year TIPS had real yields of around 3.4% when they were discontinued in October 2001. Those were stellar inflation-beating investments.)

But the Treasury did add this note in the October statement:

Here is the revised auction schedule, compared to that of 2018: 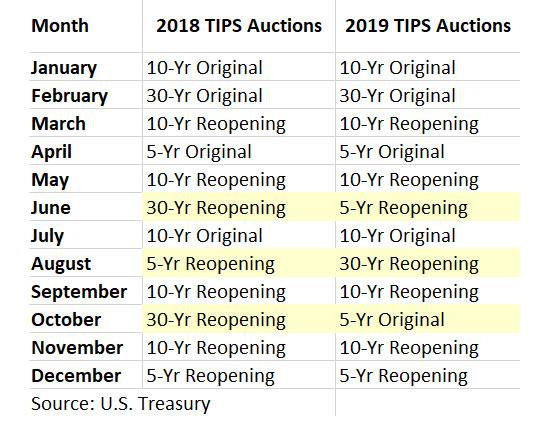 With U.S. federal deficits climbing toward $1 trillion a year, the Treasury is looking to lock in reliable, predictable sources of funding. A 5-year TIPS issue is a lot more attractive to a wider span of investors than a 30-year.

The Treasury explained its strategy in a January 30 statement:

Treasury ... expects to increase total TIPS issuance by approximately $20 to $30 billion over CY 2019, with much of the net new issuance likely to be focused in the newly-announced October 5-year issue. Treasury now anticipates that the increase in net TIPS issuance for CY2019 will be approximately $22 to $27 billion. ...

For investors... a good move

For small-scale investors (let's say anyone buying less than $1 million at auction) getting an extra new-issue 5-year TIPS is highly appealing, especially in view of 2019's yield curve. The 5-year is currently yielding about 0.52%, just 10 basis points less than the yield of a 10-year TIPS. The shorter maturity also makes it a less-risky holding.

Over time, this change should slightly skew the duration of big TIPS ETFs - TIP, for example, with $21.5 billion in assets - to a lower number, as the shorter-range securities make up more of the total. But the Treasury says the overall change will be slight:

Treasury anticipates the financing changes announced today will continue to result in a weighted-average maturity (WAM) of the debt outstanding that is stable at or around current levels, barring large, unexpected changes to borrowing needs.

For small-scale investors, in my opinion, the 30-year TIPS is currently too risky with too little reward (a real yield of just 0.98%) to be attractive. Under the new Treasury auction schedule, investors will have a chance to purchase TIPS maturing in the 5-year to 10-year range in 10 months of the year, and that's a good thing.

The increase in supply could also slightly raise real yields, another plus for investors.

And the move also makes sense for the Treasury, offering the ability to raise additional funding to the widest market possible.