Calfrac’s Recovery May Not Last Long

Calfrac Well Services (OTCPK:CFWFF) provides hydraulic fracturing, coiled tubing, cementing and other well stimulation services to energy customers in Canada, the United States, Russia and Argentina. I think investing in the stock can be risky until the fundamental drivers alter significantly. The Canadian crude oil market poses a strategic challenge for Calfrac. Uncertainty and delays over the construction of some of the large pipelines weaken Canada’s outlook, leading to lower pressure pumping utilization and a decline in the related OFS services. Calfrac’s debt level is higher than many of its peers, which along with inconsistent cash flow, can put more strain on its balance sheet in the long run.

The recovery in the crude oil price, an appreciation in the Canadian dollar, and lower differential in the WCS-WTI spread can partially offset some of the weaknesses in the short-term. The company’s other international operations are expected to remain steady this year. 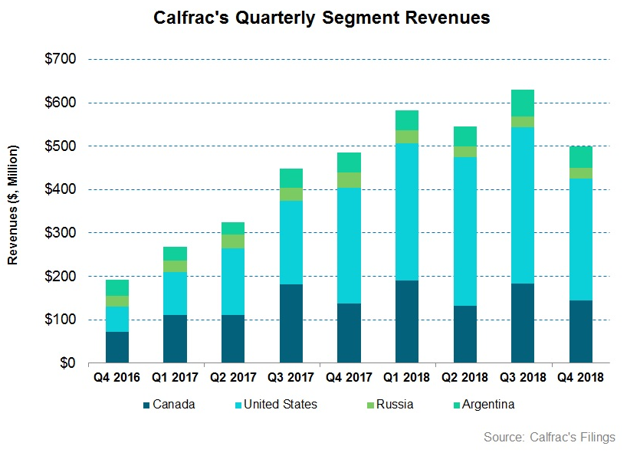 Calfrac has been strategically shifting its revenue base from Canada to the U.S. in the past couple of years. While revenues from Canada accounted for 41% of its revenues in Q1 2017 now accounts only for ~29% of its revenues. By the end of FY2018, Calfrac’s total pumping horsepower decreased by 37% compared to FY2017. The Western Canada Select (or WCS) to the West Texas Intermediate (or WTI) crude oil price differential, which significantly influences the Canadian energy activity, adversely affected fracking and pressure pumping activity, which in turn reduced demand for pressure pumping services in FY2018. I will elaborate more on this and the other key industry drivers later in the article. 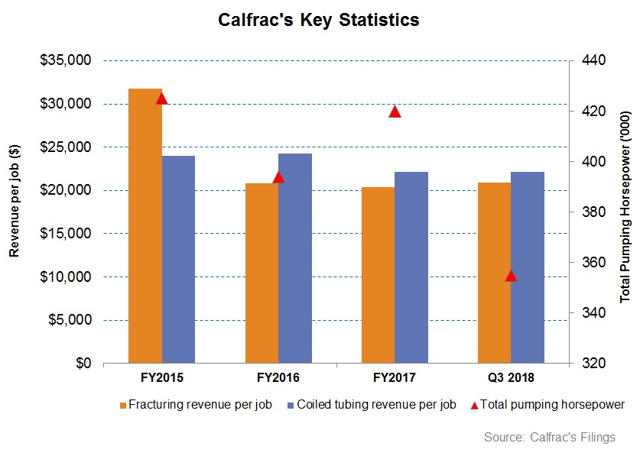 Interestingly, the situation did improve for the company’s operations in Canada in Q4 2018. A higher fracturing job count led to more active asset utilization. Horsepower deployment and coiled tubing units increased by 4% and 22% respectively, in Q4 2018 compared to a year ago. However, I cannot say that recovery has been underway, because lower revenue per fracturing job in Canada led to a 21% fall in revenues in that region from Q3 to Q4, while operating income from the Canada operations dipped by 40% during the same period. Compared to a year ago, the region did exhibit improvement in the performance due to lower proppant costs as the supply of sand improved. Although the trend started in Q3, the benefits began trickling down during the end of Q4 2018.

In Q1, Calfrac’s performance typically stays subdued due to energy production slowdown in winter. This year, its management seems to be even more uncertain given the low visibility, and therefore plans to adjust the fleet disposition based on the weather condition. At the beginning of this year, it suspended operations for one fleet in Canada due to weaker demand for fracturing services. Although fleet utilization would remain unchanged, pricing is likely to come down compared to Q4 2018.

In the long-run, Canada will continue to be an essential part of energy production given the country’s supply of natural gas, which is considered to be a clean energy option. However, in the near-to-medium term, Calfrac’s Canada operations are likely to remain depressed due to the lack of takeaway capacity and regulatory burden. Some uncertainties remain over the resolution of federally-approved projects. While some progress has been made in projects like Kinder Morgan’s Trans Mountain expansion pipeline and Enbridge’s Line 3, the TransCanada Keystone XL remains in limbo. There can be either a decline or limited increase in demand for fracturing services in Canada as a result of the project delays.

In this context, I will discuss three critical industry indicators: the WCS-WTI crude price differential, rig count in Canada, and the U.S. dollar-Canadian dollar foreign exchange movement. These indicators signal the effects on Calfrac’s revenues and earnings. 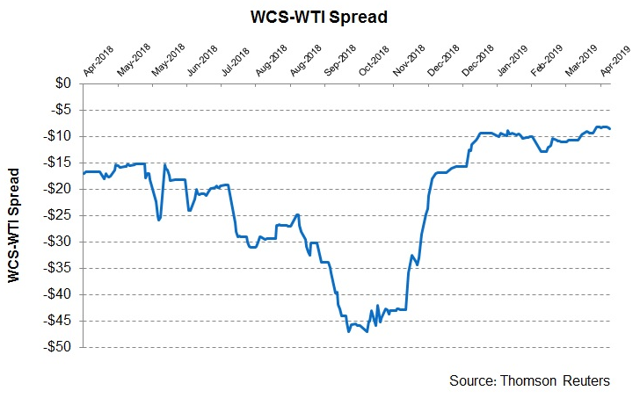 Investors may note that Western Canada Select (or WCS), which tracks heavy oil from Canada, typically trades at a discount relative to WTI. The lower price reflects quality issues, as well as the cost of transport from Alberta to refineries in the U.S. The WCS-WTI spread came down significantly during the end of Q4 and has continued to stay a much lower level in Q1 2019. The Canadian government’s initiative led to a production curtailment of 325,000 b/d in January after a provincial government mandate capped production.

Although energy production has increased since then, the differential has lowered considerably since late 2018. WCS is currently trading at ~$9.5/barrel lower than the WTI crude oil price, while it was trading at a spread of more than a $12/barrel at the beginning of 2019. The spread is unlikely to return to the 2018-high anytime soon. The lower differential in Q1 2019 is expected to benefit Calfrac’s financial performance in Q1. 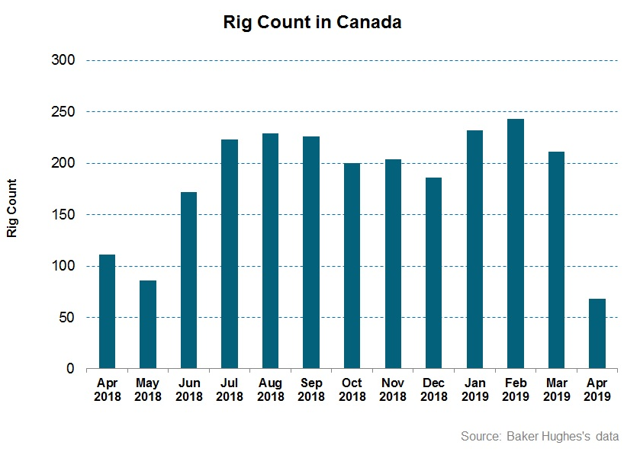 According to Baker Hughes’s rig count data, the Canadian rig count has declined by 29% in the past year until April 19. In contrast, the U.S. rig count has remained nearly unchanged in the past year. The drop in the Canadian rig count could turn out to be a severe concern for the producers to maintain their operating cash flow as well as for the servicing companies. Although the rig count in Canada was relatively resilient in Q1, the decline, if sustained, will ultimately lead to lower production and lower capex spend by the producers, which will affect the OFS companies’ revenues and margin. 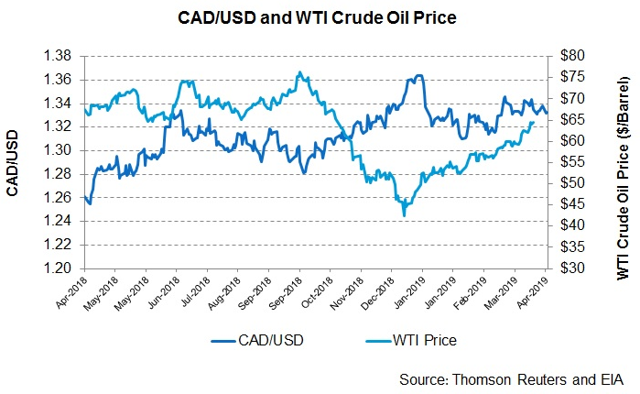 CFWFF is exposed to foreign exchange risk associated with currencies including the U.S. dollar, Russian rouble, Mexican peso, and Argentinean peso. The most significant among these is the USD-CAD relationship, because, on average, the U.S. accounted for ~57% of Calfrac’s total revenues in FY2018. Crude oil has a negative correlation with USD/CAD. When oil goes up, USD/CAD goes down. Since the beginning of 2019, the WTI crude oil price has increased by 42%, while the USD has depreciated by 2.3% during this period. Higher crude oil price is favorable for the Canadian oil producers, and hence, is also beneficial for the OFS companies like CFWFF. Investors may note that for each percentage change in the value of U.S. dollar, Calfrac’s net income is affected by CAD 562,000, according to its 2018 annual report.

Outlook In The U.S.

In the U.S., Calfrac operated 17 active fleets in 2018. While it exited 2018 with the same number of active fleets as in Q3 2018, revenues in the U.S. declined by 22% from Q3 to Q4, due primarily to low asset utilization. In Q1 and Q2 of 2019, the fleet count can reduce to a range between 13 and 17 as the upstream operators typically pause operations in North Dakota and Pennsylvania. Lower demand can lead to low asset utilization for up to five fleets in February, estimates the company. While utilization may increase in March, the company’s management remains cautiously optimistic on its U.S. operations. Redeploying assets from Canada, where the upstream activity is likely to take a severe hit in Q1, can still keep its fleets utilized, but lower pricing can keep margin under pressure notwithstanding.

The real upside in the U.S. could be the revival of completions activity following the crude oil price recovery and the alleviation of the Permian capacity bottleneck issue. Since the beginning of 2019, although Drilled but uncompleted wells (or DUC) have continued to grow (4% up) until February, it was more than matched by the growth in completed wells (11% up), according to EIA’s estimates. The figures indicate a recovery in well completions activity, which was fueled by a 42% rise in the West Texas Intermediate (or WTI) crude oil price in 2019 so far.

Argentina has been Calfrac’s strong performer. Revenues from Argentina increased by 35% FY2018 compared to a year ago, although sequentially (quarter-over-quarter) in Q4, it did deteriorate. The company’s management expects better results to come from this region in 2019. Contracted work volumes can increase from Argentina in 2019. The company also plans to transfer idled cementing assets from the U.S. to Argentina.

In FY2018, Calfrac’s cash flow from operations (or CFO) was CAD 185 million, which was a sharp improvement compared to a negative CFO in FY2017. On top of a 48% increase in revenues, the company’s working capital improved in FY2018 due to lower accounts receivable and inventory balance, partially offset by lower accounts payable.

Calfrac’s cash and cash equivalents were CAD 51.9 million on December 31, 2018. It had CAD 254 million available from its revolving credit facility as of December 31. Recently, the company increased its FY2019 capital budget to CAD 149 million, which means capex would remain unchanged in FY019.

On December 31, 2018, its net debt to adjusted EBITDA was 2.9x, while its debt-to-equity (or leverage) was 1.9x. The company’s balance sheet is more leveraged than some of its peers in the industry. Trican Well Services (OTCPK:TOLWF) (TSE: TCW) has a leverage of 0.09x, while Nabors Industries’ (NBR) leverage stands at 1.36x. Calfrac plans to reduce debt by using its free cash flows (or FCF). While its FCF improved in Q4 2018, based on past several quarters, the company’s FCF generation has been choppy. The FCF volatility raises concern over its ability to meet the objective of debt reduction through FCF.

Calfrac has CAD 200 million of debt repayment obligation in 2020, while the majority of the repayment burden lies in 2026 (~CAD 887 million). With the available liquidity (cash balance and undrawn revolving credit facility), Calfrac does not require additional external financing to meet its near-term financial obligations. However, without further re-financing, it needs to improve cash flows significantly to meet its long-term financial obligations.

What Does The Relative Valuation Say? 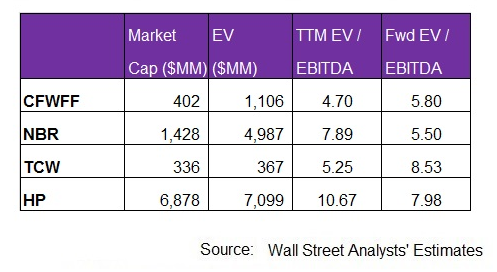 What’s The Take On Calfrac?

Canada continues to account for a significant part of Calfrac’s business portfolio. True, the recovery in the crude oil price, an appreciation in the Canadian dollar, and lower differential in the WCS-WTI spread can partially offset some of the weaknesses in the short-term. However, the Canadian crude oil market poses a more strategic challenge for Calfrac. Delays and uncertainty over the construction of some of the large pipelines weaken Canada’s outlook, which has led to lower pressure pumping utilization and a decline in the related OFS services.

The company’s business in the U.S. was growing until Q4 when the completions activity headwind and the crude oil price weakness leveled off. But, I expect the fall to be temporary, as the top line and margin can pick up in the latter part of 2019. The company’s other international operations should also remain steady this year.

Calfrac’s high leverage along with inconsistent cash flow can put a strain on its balance sheet in the long run. Overall, the company’s management requires more stable revenue bases to maintain steady cash flow. Investing in the stock can be risky until the fundamental drivers alter significantly. 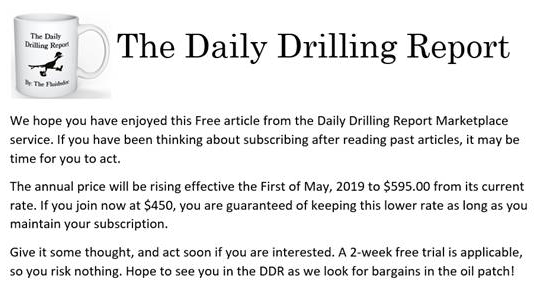 Badsha Chowdhury
1.11K Followers
I have more than 14 years of experience in analyzing and writing on stocks. I write on both long and short sides in an unbiased manner. I have been covering the energy sectors for the past 7 years, with the primary focus on the oilfield equipment services sector. I also cover the Industrial Supply industry. I occasionally co-author with Seeking Alpha contributor Thomas Prescott.