Back in the old days, we used to have regular panics or Depressions. The reason for this was simple - we had a much more consolidated and unstable economy.

The US economy has become fantastically stable as it has diversified its sectoral growth contributions.

What made the GFC unique was that a single sector was at the heart of the downturn.

Someone emailed me with a very good question yesterday:

"Did we really go through a once-in-a-lifetime Great Recession in 2008, or is the global economy overleveraged to an even greater extent, just in different ways?" 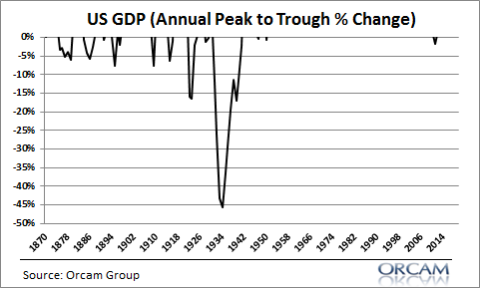 This is what makes the GFC so interesting. The GFC wasn't unique because it was a debt crisis. Debt crises and financial panics are as old as the US economy. What made the GFC unique was that a single sector was at the heart of the downturn. So, just like the railroad industry was able to collapse the entire US economy during the Panic of 1873, the housing sector was able to collapse the US economy in 2008. Importantly, it wasn't the sheer size of the real estate market as a portion of GDP that mattered in 2008. It was the size of housing as a portion of private sector debt. At 75% of household debt, the housing sector is tremendously important to the stability of the US economy. So, if you get a debt crisis in housing, you get a crisis in the economy. But debt alone isn't problematic. What made the GFC so unique was not just a lot of housing debt, but a housing price boom connected to all that debt. And when prices collapsed, it was like a match on gasoline.

So, let's circle back to the question at hand. Was the GFC really a once-in-a-lifetime type of event? I hesitate to say we'll never see anything like the GFC in our lifetimes again, for several reasons:

Was the GFC an unusual and low probability event? Yes. Is it likely to be seen again soon? I suspect no, mainly because the US economy has become much more robust and resilient with time. As I often say, with slower growth comes more stable returns.

That said, the economy is not the market, and when it comes to managing our finances, the important point to remember is that we should always ensure that our portfolios are robust to withstand substantial downturns, whether they occur around expansions, recessions or depressions. Don't waste your time worrying about whether a recession will become a depression. After all, if your portfolio isn't robust enough for you to withstand a 20-30% downturn (which regularly occur within garden variety recessions and even expansions), then you aren't going to care when you're down 75% during a Depression. And one thing is for certain - the days of stock market booms and busts are surely not ending, even if our macroeconomy seems to be getting more stable.

Follow Cullen Roche and get email alerts
+
Add a comment
Disagree with this article? Submit your own.
To report a factual error in this article, click here.
Your feedback matters to us!