I recently had the pleasure of attending the 18th annual Bio-IT world Conference and Expo at the Seaport World Trade Center in Boston with more than 3,000 researchers, bioinformaticians, and experts. My reason for attending the conference was that, during my analysis of some biotechnology companies as investments, I came to know that many of them are using proprietary algorithms that use technologies like artificial intelligence, AI, and data analytics to find the best therapeutic targets, for example, the neoantigens from a cancer patient's tumor biopsy, which might have the highest likelihood of eliciting T-cell response then injected in the patient as a cancer vaccine in combination with checkpoint inhibitors. A company called Gritstone Oncology (GRTS), which I recently started covering, claims that their proprietary AI algorithms are nine times better than publicly available algorithms in detecting the cancer neoantigens.

My reason for attending this conference was to learn more about how these newer technologies like AI and data analytics are being used in drug discovery and other applications in medicine. Due to my personal interest in investing in biotechnology companies which are developing therapies for genetic diseases and cancers, I decided to attend the 'AI for genomics' track among approximately 20 tracks are available at this vast conference.

The concept of AI dates back to 1950s, starting with models to do statistical analysis of the data. With the increasing popularity of natural human language recognition ability, for example in Amazon's (AMZN) Alexa, AI has gone more mainstream. Machine learning and deep learning (deep neural networks) fall within the broad spectrum of AI as shown in the figure given below. 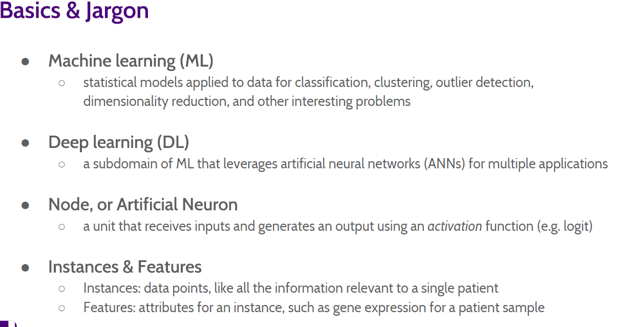 (Some essential terms in the field of AI, source: presentation by Gaurav Kaushik, Cascadian Bio's CEO at the annual Bio-IT World conference)

In this article, I will report some key observations and developments in this field which I came to know from attending some presentations in this conference. 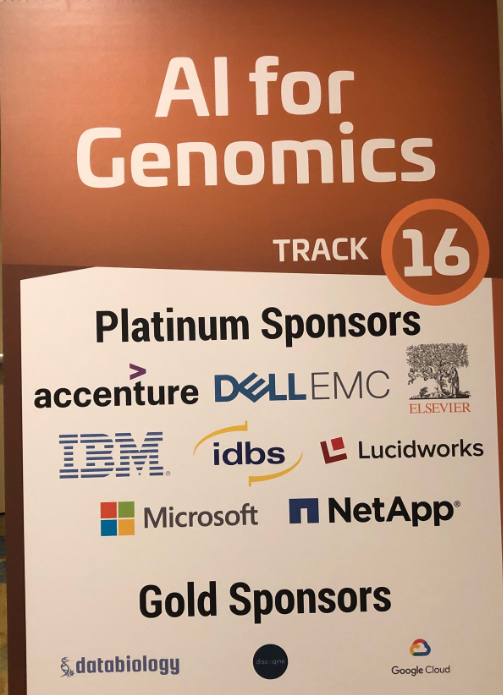 The use of AI and data analytics has become important in drug discovery and medicine after the concept of precision medicine i.e. treatments that are targeted at small groups that share a common feature, for example, an abnormal mutation in a type of cancer. The current revolution in genetics has its backgrounds in the completion of the Human Genome Project in 2003. From among the thousands of potential targets, AI and deep learning are able to perform the data analysis much faster than humans using insights gained from different healthcare databases, including genetic markers data collected from thousands of patients. AI can perform complex statistical calculations and correlations by analyzing this vast patient data and provide insights regarding which anticancer targets could be potential future therapies. The National Institutes of Health is running a research program which aims to collect data on 1 million patients for application in precision medicine. This data can be used by researchers to identify potential therapeutic targets and develop new treatments. Healthcare practitioners like physicians can use the insights gained from artificial intelligence in preventive medicine, that is to identify the factors which may increase the risk of disease in a patient population. Certain healthcare systems are also using artificial intelligence and data analytics in their healthcare quality improvement projects. The software can be integrated with currently available electronic health record systems to collect and analyze the patient data.

AI can help to bring the right treatment to the right patient at the right time and the right dose. It can help the medical decision based on the individual characteristics of a patient. The advantages include: better identification of diagnostic tests which are likely to benefit, identification of biomarkers which may help to identify the patients who are most likely to benefit from a treatment, early diagnosis of disease and prevention, lower healthcare costs, reduced adverse effects, and improved disease management with the help of technology like wearable sensors and mobile health applications.

An example is MammaPrint, which is a prognostic and predictive diagnostic test for early-stage breast cancer. This tool analyzes the expression signature from 70 genes to calculate a risk score of tumor that assesses and benefit of chemotherapy and also predicts recurrence of cancer. 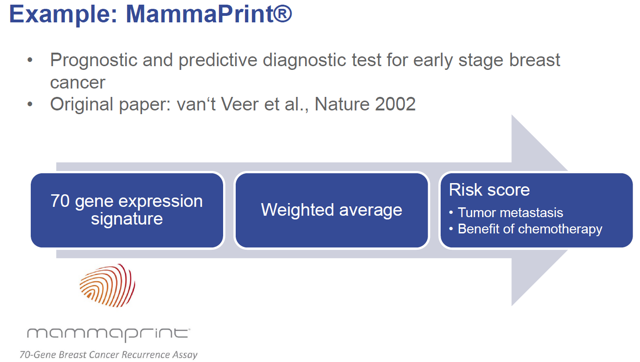 In another study, dual deep neural networks were able to identify and distinguish between histological features distinguishing between benign, cancer in situ and invasive cancer features from breast biopsy, with high area under the curve, AUC of 0.97 (see the figure below). 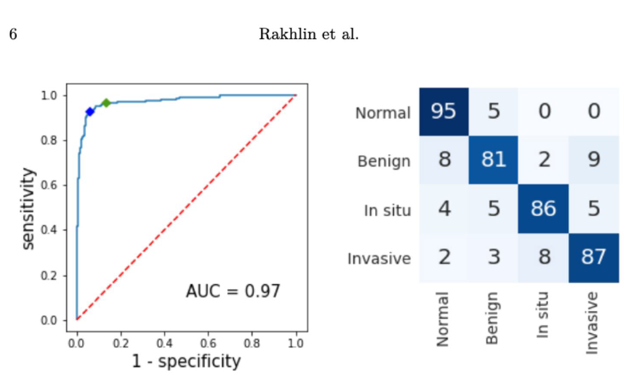 In another study, Google AI and other researchers were able to improve the accuracy and confidence in the diagnosis of diabetic retinopathy by analyzing retinal imaging (high AUC of 0.99).

Although these AI models do not claim to replace the clinicians, they have the ability to assist humans in their work.

Retail companies like 23andMe are examples of the potential of mainstream adoption of genomic sequencing in identifying the risks for diseases. For example, 23andMe provides a test costing $199 which can tell about ancestry as well as health, for example, genetic mutations that increase the risk of diabetes, some types of cancer and certain genetic disorders like alpha-1 antitrypsin deficiency etc. As genomic testing has become more affordable, asymptomatic individuals can be identified, and early intervention can be done to prevent the disease. In the United Kingdom, the National Health Service, NHS, has been collecting genomic data from NHS patients (with a genetic disease or their families and those with cancer) and has sequenced over 100,000 genomes from 85,000 people so far. Big pharma has recognized the commercial potential of genomic sequencing companies as precision medicine becomes more common. Roche (OTCQX:RHHBY) acquired Foundation Medicine for $2.4 billion last year due to its extensive genomic sequencing panel in diagnosis of cancers. Foundation Medicine also had a busy booth in the conference Expo. Using AI, data from these vast genomic databases can be analyzed to gain insights like new therapeutic targets.

An interesting example of using AI/data analytics in drug development was a poster presentation from AbbVie (ABBV) which has developed an internal algorithm and process called AbbVie's Target and Genomic algorithm, AGTC, to assist in its drug delivery efforts. I had an interesting discussion with the presenter of this poster. The image of the poster is given in the figure below. 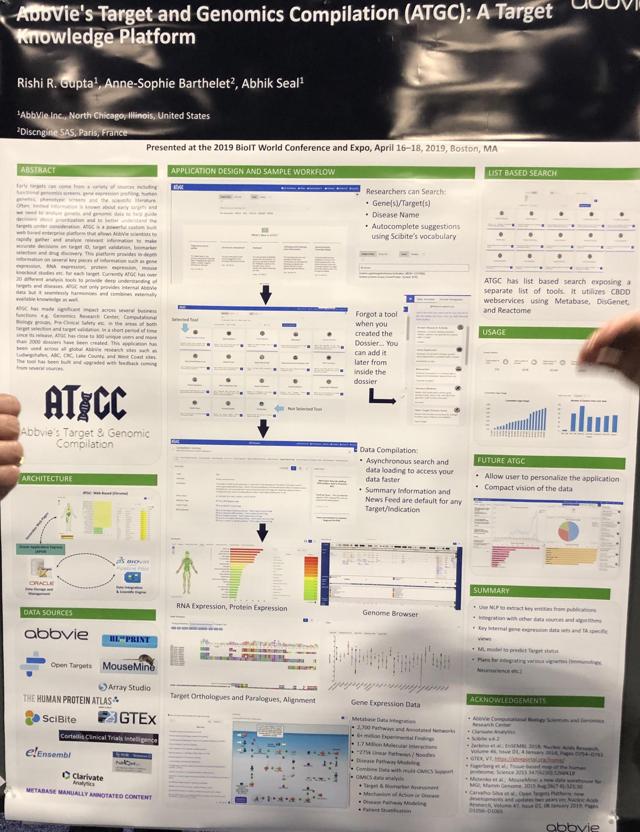 The abstract for this presentation is given in the figure below. 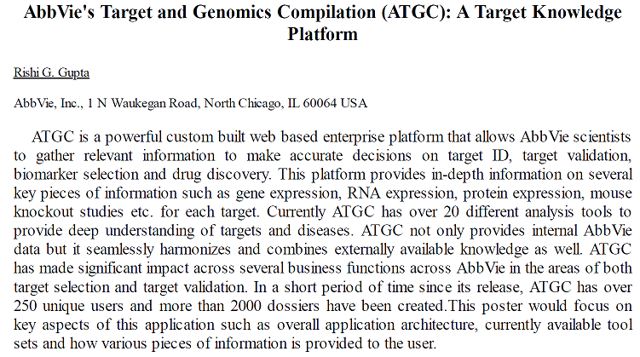 Another interesting poster presentation was from Sunovion Therapeutics/PsychoGenics which are using AI to discover new therapeutic targets in Alzheimer's disease. The abstract and the poster are shown in the figures given below. 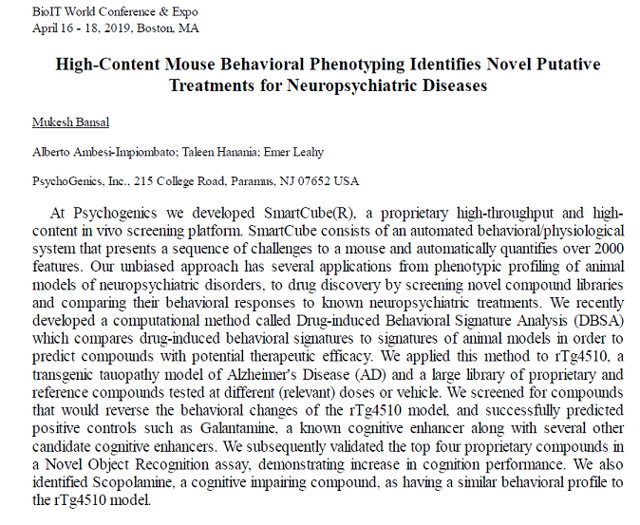 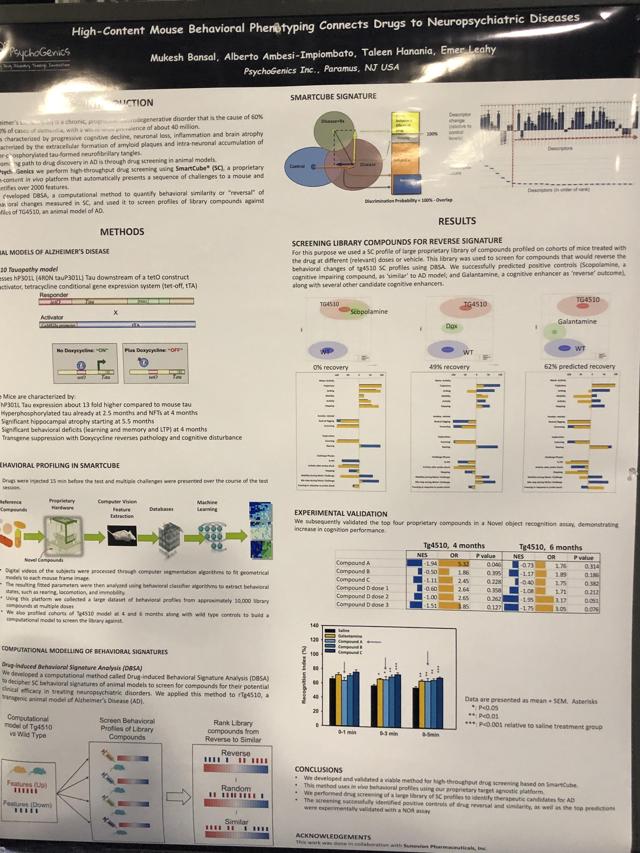 Most AI-based models and algorithms fail to make it to clinical practice.

The reasons are shown in the figure below:

Apart from issues like poor prediction performance, need for extensive validation, insufficient validation of many models before putting in use, difficulties in model interpretation, AI-based algorithms also have ethical and legal issues like maintaining the privacy of healthcare data.

How to improve the limitations of AI-based algorithms:

Many limitations like poor prediction performance can be improved by collecting large amount of data. For example, a Human Cell Atlas Project was announced recently which will collect large amounts of data from the trillions of cells in the human body. AI-based algorithms work on the principle of garbage in, garbage out. Using the right data to validate and train AI algorithms, which is sufficiently large, has high signal to noise ratio, covers well-defined and measured clinical endpoints, and avoids biases towards specific sub-populations (e.g. based on race), may help to improve the above-mentioned challenges before the algorithm is used in a real-world setting, like a clinical trial or in clinical practice (from the above presentation by Stephen Hsu).

Recently, FDA has also issued guidelines on the use of software as a medical device in healthcare.

In addition, more advanced computation models can help to overcome some of these shortcomings. 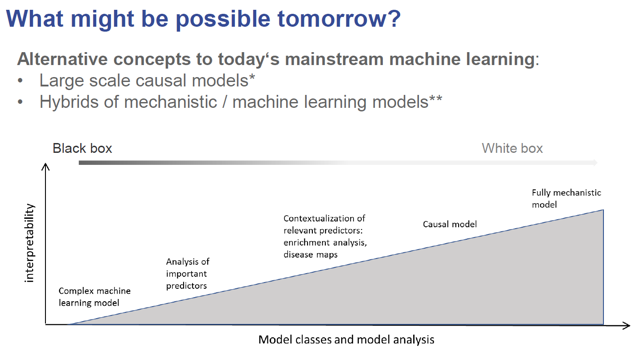 Another interesting example of advanced AI models which may be effective in removing some of these challenges is Generated Adversarial Networks or GANS.

I attended a presentation by the CEO of Cambridge, MA-based startup Gaurav Kaushik, who was asked a question by the audience regarding what he is watching in the AI space. His answer was 'GANS'. A portrait painting which was created by using a GANS code was sold at an auction for >$400,000. 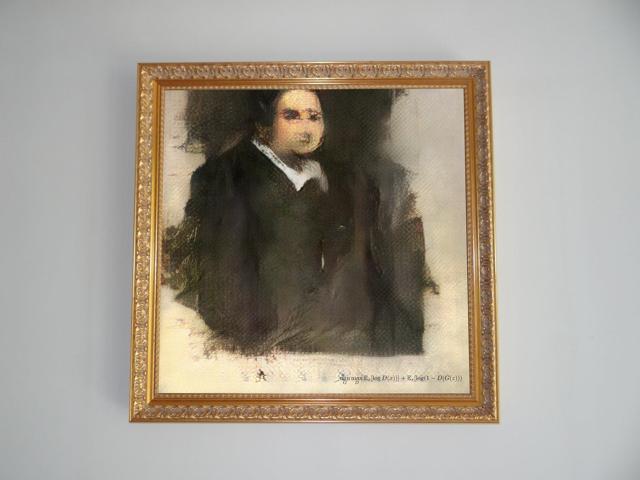 "Edmond de Belamy, from La Famille de Belamy," by the French art collective Obvious, which was sold by Christie's for $432,500

Play with GANS in your web browser here.

AI has to potential to disrupt the field of healthcare, including precision medicine, drug discovery, disease screening and diagnosis, and healthcare delivery quality improvement. While some exciting developments have been seen, for example, the high accuracy of AI algorithms in diagnosing diabetic retinopathy or breast malignancy in pathology specimens, the AI algorithms are mostly using visual feature processing here (similar to screening for a person using his facial features). Most AI algorithms under development have challenges which can be improved by various methods. More advanced AI models like GANS can help to overcome some limitations with currently commonly used AI models.

"Great service with in-depth research on biotech stocks. I appreciate that Dr. Sharma will take the time to review and publish reports/updates on stocks that members request. Biotech investing is very complex and it's great to have someone so knowledgeable guiding us."

"If you want to invest in biotech following events (catalysts), this is the right service for you. His research is based on his knowledge, experience and interview with KOLs."

Disclosure: I am/we are long GRTS. I wrote this article myself, and it expresses my own opinions. I am not receiving compensation for it (other than from Seeking Alpha). I have no business relationship with any company whose stock is mentioned in this article.

Additional disclosure: Disclaimer: This article represents my own opinion and is not a substitute for professional investment advice. It does not represent a solicitation to buy or sell any security. Investors should do their own research and consult their financial adviser before making any investment. Investing in equities, especially biotech stocks has the risk of significant losses and may not be suitable for all investors. While the sources of information and data in this article have been checked, their accuracy cannot be completely guaranteed.