The withdrawal season is over. May contract will expire tomorrow and, increasingly, natural gas trading will be getting less weather-dependent and more price-dependent. Therefore, we thought it was the right time that we relaunch our regular monthly series focusing on natural gas usage in the Electric Power sector and update you on the latest trends.

Why should natural gas traders care about the latest trends in the Electric Power sector (EP sector)?

The simple answer is because the EP sector is the primary consumer of natural gas. Its share in the annual demand structure is more than 31% (on a 12-month basis), while its share in the injection season demand is close to 50% (see the charts below). 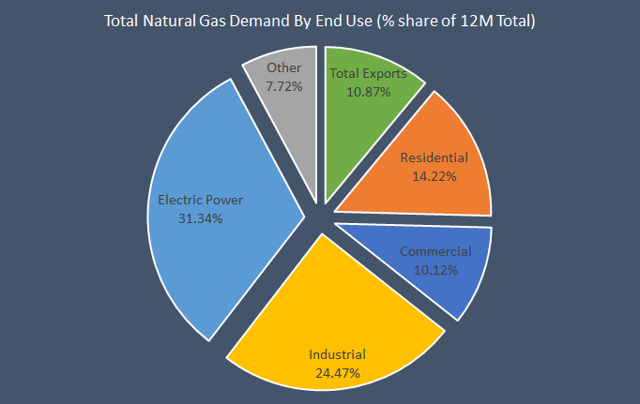 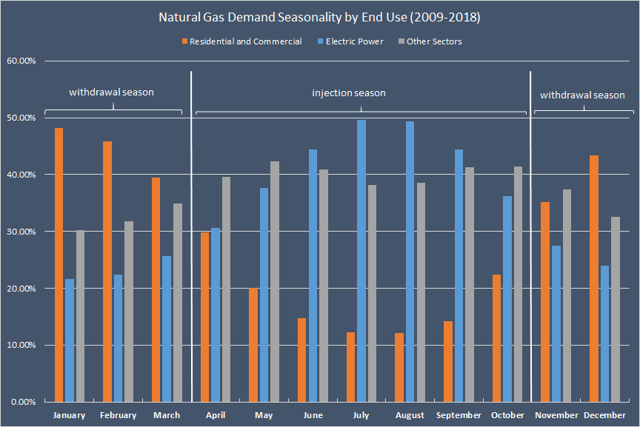 As you can see, the average of injection season "price minimums" is higher than the average of withdrawal season "price minimums." Indeed, we have seen cases in the past when warm winters pushed natural gas prices as low as $1.611 per MMBtu, yet we have never seen cases (at least in the recent past) when cool summers pushed prices below $2.000 per MMBtu (for summer contracts). That is because cheap natural gas during the summer is much more supportive of consumption than cheap natural gas during the winter. By the way, it's also the reason why the highest prices during the injection season have always been lower than the highest prices during the withdrawal season.

What indicators should traders monitor?

Here's a list of four key indicators that we think should be monitored:

Let's now look at each of these indicators in more detail.

Coal is the closest "substitute" to natural gas when it comes to electricity generation. The relationship between these two commodities becomes particularly important during summer months when heat drives air conditioning use higher. Because of the substitution effect, coal prices and natural gas prices should exhibit some correlation. In other words, natural gas prices cannot increase independently of coal prices (at least in theory and especially during the summer). Recently, this correlation has weakened due to structural changes in the market (retiring coal power plants, new additions of gas-fired capacity, environmental regulations, surging production of shale gas, etc.), but because coal power plants still generate around a quarter of all electricity produced in the U.S., the link between coal and gas remains relevant. 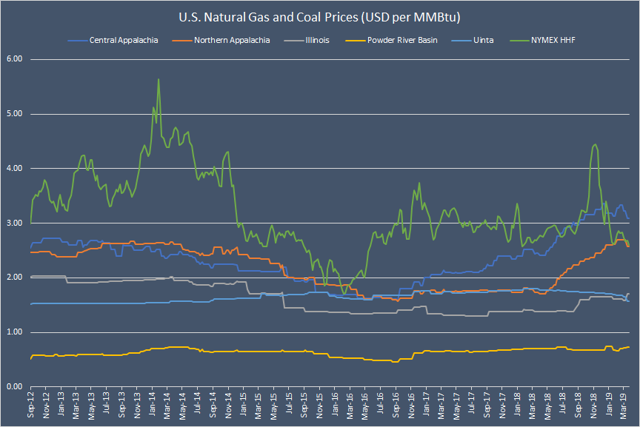 As you can see from the chart above, natural gas has almost always been more expensive than coal, but it does not mean that generating electricity by burning coal is more economically viable. Some types of coal are exceptionally cheap - particularly, Powder River Basin type (also known as Western coal or "PRB") simply because they are very low in energy content. Furthermore, some types of coal are notoriously dirty and have high "environmental costs". Conversely, commercialized natural gas is practically sulphur free and produces virtually no sulphur dioxide (SO2) - see the table below. 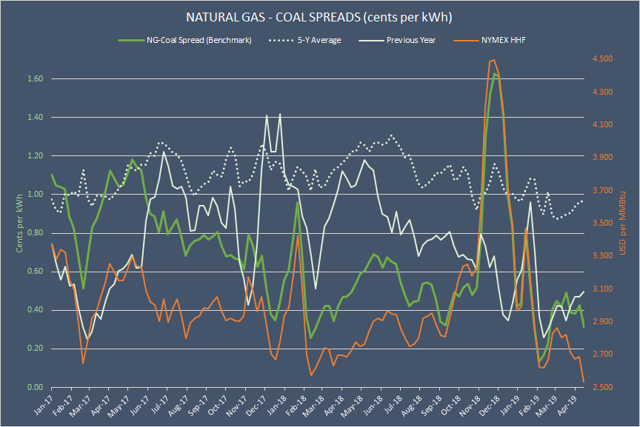 We have calculated that NG/Coal Spread (when adjusted for all the factors mentioned above) is currently as much as 68% below 5-year average and 37% below last year's level, which is very unusual for this time of the year when cooling degree-days are starting to rise. In the simplest of terms, it means that:

Below are three key points to remember about coal-to-gas switching: 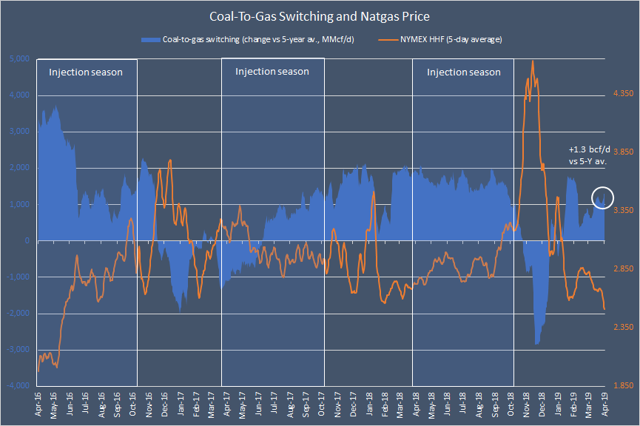 It is important to remember that the fuel-switching curve has been getting stickier on the upside. In other words, today, a smaller negative change in NG-Coal spread will have a disproportionately higher positive effect on coal-to-gas switching that was the case before. This is due to a combination of structural and economic reasons, such as changing geographical distribution of operating coal and natural gas power plants and the cost of switching itself.

Power generation facilities, both conventional fueled steam-generation and nuclear-powered plants require vigilant, well-organized operation using meticulous maintenance management to stay online and produce energy safely and efficiently. When the plant is undergoing a maintenance, it does not produce any electricity. This is known as "outage". Nuclear outages are often replaced by natural gas-fired generation. Therefore, there is a positive correlation between natural gas outages and natural gas consumption in the EP sector.

U.S. Nuclear Regulatory Commission reported that as of today, there are a total of 15,900 MW of nuclear power generation offline (-1,100 MW from Wednesday, -17.2% vs 5-year average). Below normal nuclear outages do not currently provide any additional boost to consumption. 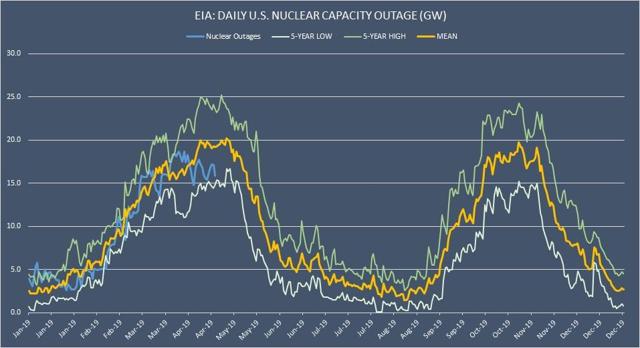 The total stock of natural gas-fired power plants continues to increase. As of February 2019, it stood at 460.75 GW, which at that time accounted for 42.9% of total generating capacity in the U.S. In May of this year, natural gas share in the total fuel mix is expected to rise to 43.0% (+0.6 percentage points, y-o-y) and equal just around 462.05 GW (see the chart below). 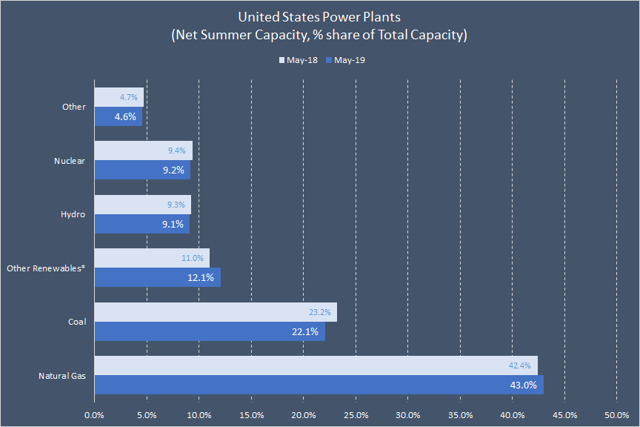 Major additions, however, are planned for June this year when 3.8 GW of new natural gas-fired capacities will be commissioned - most notably, Okeechobee Clean Energy Center in Florida and St. Charles Power Station in Louisiana. Another important development this year is the planned retirement of two nuclear power stations: Three Mile Island and Pilgrim Nuclear Power Station, which together have a net summer capacity of over 1.5 GW. Overall, no less than 11 GW of nuclear capacities is expected to retire in the next 5 years while only 2 GW of nuclear capacities will be added over the same period. Other sources - particularly, natural gas and renewables - will have to replace the loss of nuclear generation.

Notice also that the share of "other renewables" (wind and solar) has already overtaken hydro and nuclear (see the chart above). Previously, in an attempt to estimate the levels of potential natural gas consumption in the EP sector, analysts would look at the schedule of power plants outages to try to figure out how many nuclear and coal megawatts will be replaced by natural gas. They would also study the level of snowpack to estimate hydro inflows and eliminate it from total calculations.

Now, however, analysts must also study wind speeds and the levels of solar radiation since the influence of "other renewables" can no longer be ignored. In this regard, please note that out of 12 calendar months, May has historically been one of the strongest months for renewable power (see full ranking in the chart below). Also, notice that electricity generation from renewable sources normally declines during the injection season. 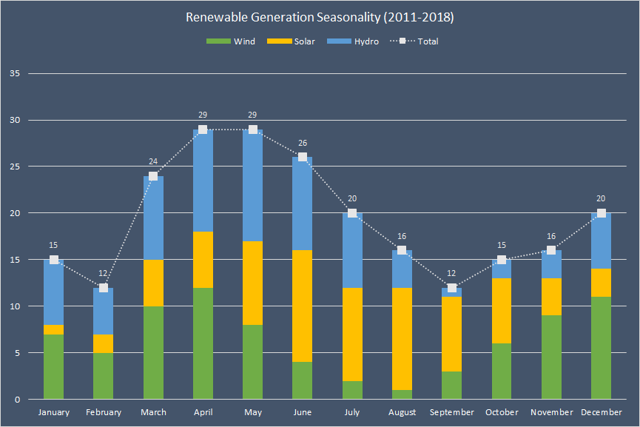 The latest data indicates that the weight of the Electric Power sector in the natural gas market continues to grow. EIA has recently released its regular Electric Power Monthly Report. It shows that in February 2019, the share of total electricity supplied by natural gas-fired power plants increased by almost four percentage points y-o-y (from 31.36% to 35.25% - see the chart below). It is the highest share of natural gas-fired generation for the month of February ever recorded. At the same time, the share of coal has declined by just over one percentage over the same period to 25.54%.

On a twelve-month average basis, net electricity generation from natural gas has reached a new all-time high - 35.57%. At the same time, the share of coal has dropped to an all-time low of 26.95%. 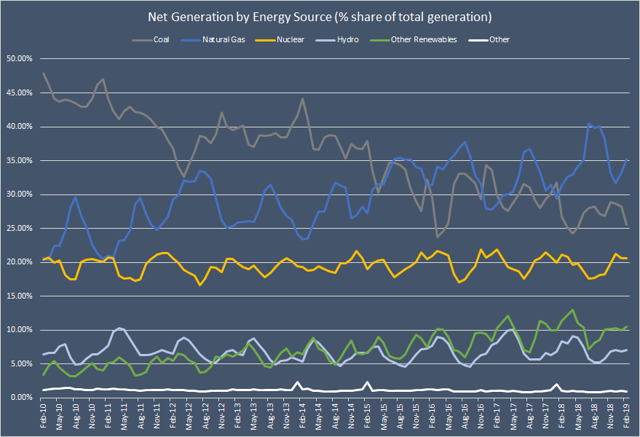 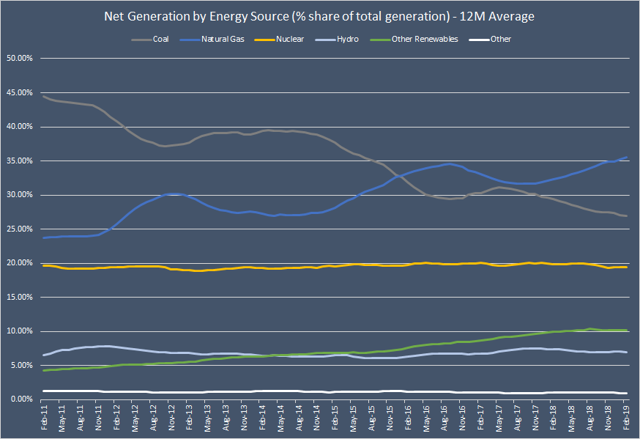 In addition, when we factor in other market variables such as production, imports, exports, and consumption by other users, we estimate that total natural gas balance in May will be looser than last year by around 6.0 bcf/day. In absolute terms, this is a bearish development, but natural gas price is already down 11.50% y-o-y, so a lot of bearishness has been priced in.

Bluegold Trader
5.1K Followers
Author of Energy & Currencies Trader
High quality, up to date analytics (natural gas, crude oil and forex)
Bluegold Trader (BGT) is an independent provider of public market information and trading analytics. BGT is a one-stop shop for all your research needs in energy and forex trading.