Yada, yada, or so respond US stocks (SPY, DIA, QQQ) to the strong Q1 GDP report, though Russell 2000 (IWM) is up about three quarters of a percent in Friday trade.

Even the 10-Yr US Treasury Note (IEF) dialed down yields a couple basis points from the Thursday session.

Spot VIX is printing at about 12.75 as we prepare to close out the week. 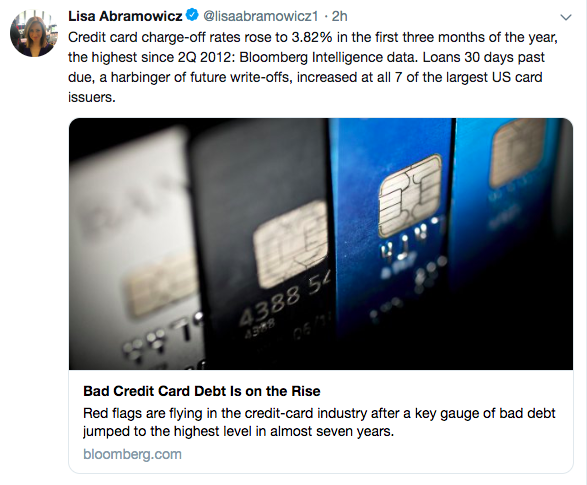 Stocks are at an all-time high: are all of our economic woes safely put to rest? Not if credit card delinquencies have anything to say on the matter.

In fairness, at any given time, there will always be some metric that is flashing danger. For instance, recall the hardship of the junk bond market in the back half of 2015. We want to examine the weight of the evidence.

While I still think the short-vol trade is where the market wants to be for the time being (largely just based on current Fed policy), there are reasons to believe that vol is underpriced here. 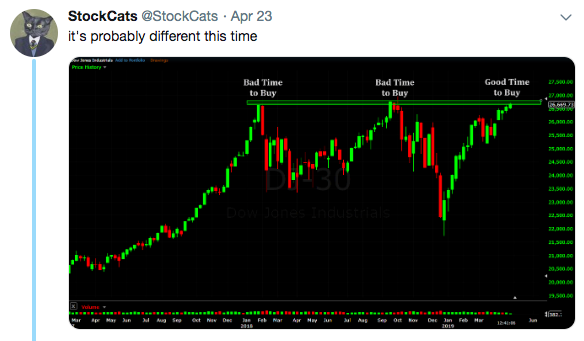 Except if the market wants to believe, then this time really is different. Just look at how drawn out that first run-up is leading to the late Jan '18 "bad time to buy" ceiling.

We are definitely overdue for some increased bouts of vol. But I'm thinking more episodic "softballs" that jar the market and then traders systematically buy the dip. 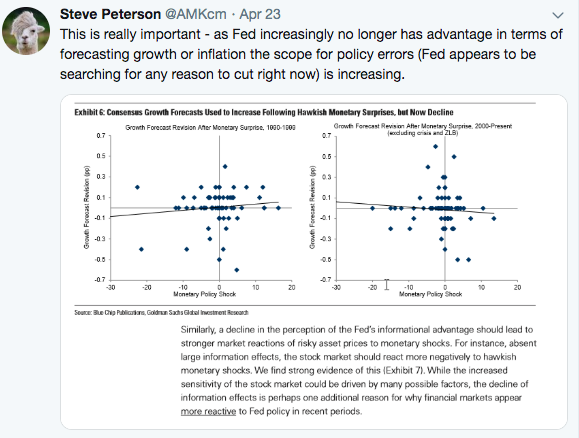 Good point, Steve. I'm interpreting here, but it sounds as though Mr. Peterson is essentially asserting that we have a Fed that is not going to be data dependent, but rather look for any justifiable excuse to cut.

If data dependency is less a priority, then a reasonable conclusion would be the potential for a widening between the "textbook" response and what the Fed will actually choose to do (or not do).

Just so long as inflation stays tame, there's probably not much room for concern here. What may really kick financial markets into high gear, however, will be if rising CPI levels force the Fed into tightening mode whether financial markets advocate the position or not. 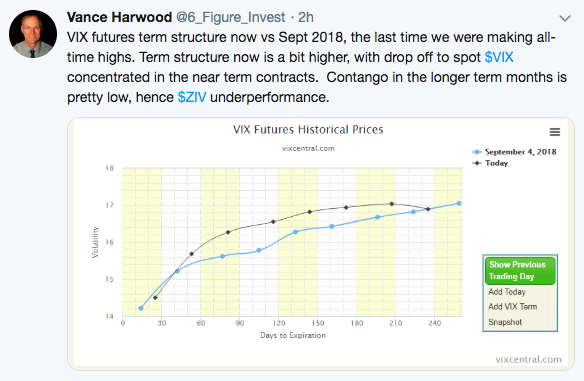 Mr. Harwood points out that today's VX term structure is quite steep at the front end, and then rapidly flattens. This is in contrast with the more gradual increase of the futures curve back in the low-vol period of early September of last year.

Stocks batted around quite a bit in June '18, and then shot up considerably in July. August saw some flare-ups, but mostly consolidation as confidence increased and the troubled period of Q1 '18 was in the rearview mirror.

I mention this because I think there's still room for investors to grow in confidence and complacency here. Sure Q1 '19 was one giant vol dump, and I also think we're overdue for a spike in realized (and implied) volatility.

But today's term structure is low on front end, but rises steeply in recognition that trouble could be right around the corner. 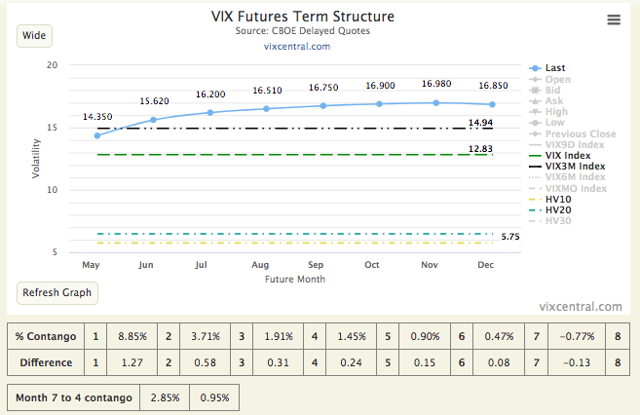 Not unlike late September '18, HV10 and 20 are trolling around in the mid-single digits. Spot VIX currently prints about 6 vol points above HV20, and VX1 trades about 1.5 vol points higher still.

Short vol positions (SVXY, ZIV) still have a ton of room on them. Traders can absorb meaningful increases to realized vol without VX futures needing to move much at all.

This in fact proves a potential difficulty with the long-vol position (VXXB, UVXY) at present: even if realized does kick up, near-term futures may be fairly disinclined to respond.

M1-M2 contango is now 8.85%, and roll yield decay is stronger still. It could make some sense to gradually acquire some product such as VXXB, but it's difficult to make the trade pay off unless one dumps position on a spike.

VIX of VIX isn't sending out too much in the way of danger signs. We're close to one-month lows. This measure frequently trends higher though, when VX futures make their way into the very bottom region of their historical range. This is because a given move in percentage terms is quite larger when the base is smaller (e.g., 1 point is 20% of 5, 10% of 10, 1% of 100...).

That is to say that this metric looks as though the VX options market is not seeing too much room for concern, but I also think that if vol continues to drop, we'll see increases in the VVIX soon.

Additional disclosure: I actively trade the futures and options markets, potentially taking multiple positions on any given day, both long and short. I also hold a more traditional portfolio of stocks and bonds that I do not "trade". I do believe the S&P 500 is priced for poor forward-looking returns over a long time frame, and so my trading activity centers around a negative delta for hedging purposes.