The Federal Housing Finance Agency (FHFA) regulates Fannie Mae (OTCQB:FNMA) and Freddie Mac (OTCQB:FMCC). FHFA just got a new director Mark Calabria and he got his first unbiased interview where he basically talked his playbook for what to do about the never-ending conservatorship. Based on his recent commentary, it's reasonable to believe the recapitalization of Fannie and Freddie will begin later this year. The purpose of this article is to talk historical context for those of you new to the longest conservatorships in history and by far the largest.

In a recapitalization, the companies will be forced by their regulator to raise money with the plan being to exit conservatorship. There are two main sources of funding available assuming that the government isn't forced to give back money that it's forced the GSEs to pay it; retained earnings and public stock issuance. Treasury Secretary Steven Mnuchin is hoping to get housing finance reform done in the next six months by getting Fannie and Freddie out of conservatorship and lowering risk at FHFA. I don't know what he means by lowering risk at FHFA. Perhaps instead of having one person run the show, they'll have more than one? Perhaps they'll put some controls in place that prevents them from structuring funding sources that permit them to enrich minority shareholders based on FHFA's discretionary accounting authority? Maybe the risk is that going forward they may have too much power over what they can do with Fannie and Freddie in some way shape or form that needs to be pulled back? I'll get into that shortly, but the premise here is that in any recapitalization, junior equity comprised of junior preferreds and common shares should retain some claim on earnings of the existing capital structure. With that in mind, it's hard to envision new money putting up $150B, especially if they are partially existing investors, if existing investors are completely left with nothing. The way things stand, there's really nothing preventing the government from going for another 10-year conservatorship unless investors get some sort of security or promise that the tactics used here in this case respect shareholder rights. I own preferred shares and I believe they will convert mostly to common shares as part of initial capital raises to recapitalize Fannie Mae and Freddie Mac. I don't own common shares, but the government, when it exercises its warrants, might make decisions to maximize the value of those warrants. I figure the commons are likely worth $4-15, but more likely $4-7 in a recapitalization where the preferred get par. If the preferred get less than par, it is possible for commons to be overvalued at their current valuation. That's my opinion. I'm sure there are other opinions out there, and if you think you have a good one, leave it in the comments.

OFHEO to FHFA - A Huge Boost In Regulatory Powers

In 2008, Congress passed HERA into law because the existing regulator at the time, Office of Federal Housing Enterprise Oversight (OFHEO), was too weak. FHFA replaced it and was designed to have far more regulatory powers over Fannie and Freddie. Spider-Man's Uncle Ben said, "with great power comes great responsibility," but in this case, the increase in statutory power was used to place them into conservatorship where FHFA used its accounting authority to retroactively justify it. FHFA and Treasury tell the world they've done nothing wrong behind closed doors and so far lawsuits against FHFA, Treasury, PwC, and Deloitte (the auditors) have not stopped the net worth sweep, but they have produced and made public significant discovery documents. The original government legal narrative was that they implemented the net worth sweep in order to save the companies from a death spiral, but has subsequently evolved and broadened to just say that the government could do whatever it wants and judges so far have largely agreed. Judge Lamberth has subsequently ruled that yes, that's true, but if you violate contract rights, you've got to deal with that.

Forbes' Ted Knutson attended a conference where he says Mnuchin wants to get this mostly done in the next six months: 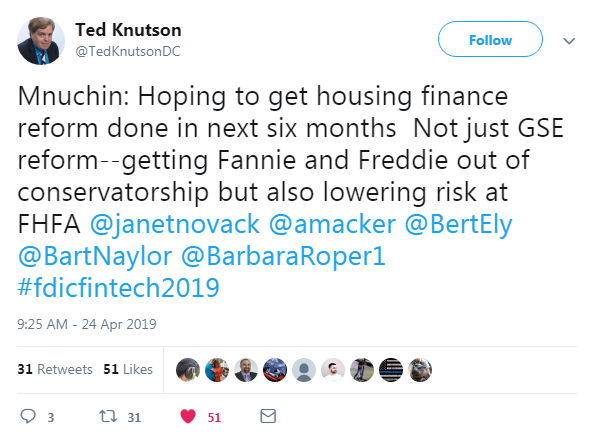 Mnuchin previously said, "any solution will be dependent upon the GSEs being capitalized properly and other such controls that eliminate risk to taxpayers." Six months from now is October.

Calabria previously wrote the conservatorship of Fannie Mae and Freddie Mac does not comply with the law. Now that he's director, it looks like he is implementing strategies that follow the spirit and the letter of the law.

Hannah Lang has reported at American Banker that Calabria plans to negotiate changes to the preferred stock purchase agreements later this year: 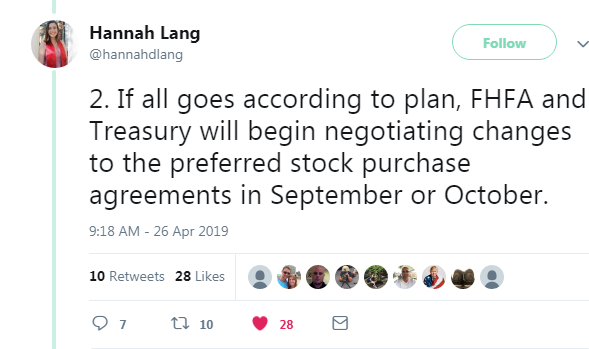 Calabria says that the plan is raising capital:

To me, the GSEs may be able to retain earnings, may be able to build capital, but I think it will absolutely require a conversation and an agreement between FHFA and Treasury on what are other avenues for raising capital

The net worth sweep prevents Fannie and Freddie from raising capital or retaining more than $3B of capital each. By Treasury taking all of the money, it makes it impossible to raise any money. Calabria believes that by taking administrative action it will effectively prod Congress to act:

My hope is that by us trying to build some momentum, that that helps enforce a sense of urgency for Congress to act. To me right now, as long as it's kind of on autopilot, that lessens the pressure on Congress to act.

Calabria qualifies his earlier comments on revoking the GSE charters as not in his wheelhouse:

I’d ultimately like to see charters open up to anybody who can apply for them, but fundamentally, that’s a decision for Congress.

Calabria also expects that at the end of his term as FHFA director that Fannie and Freddie are still in business. That basically takes receivership and renaming their spin off business operations as a new enterprise or set of enterprises off the table:

FHFA is working on finalizing the capital rule that will determine how much money Fannie and Freddie will have to retain and raise in order to exit conservatorship. Prior FHFA director Joseph Otting reported that FHFA planned to have this done by July/August. Most recently, everyone is waiting on Treasury to send Larry Kudlow the plan options that Treasury is considering. Treasury is reported to have this plan to Kudlow within weeks, or by June.

The preferred shares here still trade for less than $0.50 on the dollar, which is ironic considering that the two parties on both sides of the senior preferred securities purchase agreement agree that the next six months is when reform will get done and will work on the agreement between the GSEs and Treasury in order to begin raising capital. I would think by now, there would be arbitrage funds figuring that the two most profitable companies on earth per employee can raise enough money at current guarantee fee levels to justify junior preferred shares being made whole in a recapitalization. I don't see the lawsuits being settled for anything less. If you are trying to value the common shares, I think the Moelis plan income estimates are too high and the valuation (multiple) too rich. That said, who am I to say what the market is willing to pay for the largest capital raise in history in the midst of a 10-year bull market. New investors will have to pay to recapitalize the companies and buy Treasury's 79.9% pre-capital raise warrant stake. The amount of money being raised will have to be at least at a valuation where the amount of capital can be raised. Outside of that I guess it depends on how much money Treasury wants to take for solving the problem it invented in the first place when Dan Jester worked with Hank Paulson to reconstruct the record and exercise the government's newly expanded regulatory powers over the GSEs.

The administrative reform/recapitalization front is currently scheduled to raise 2.55-3.25% capital for the enterprises if you are just looking at the proposed capital rule. That's an unprecedented amount of capital and FHFA has had more power over the GSEs since 2008 because of HERA compared to the previous regulator. People who say that administrative reform will lead to the same problems we always had are ignoring the fact that the government has far more power over controlling what business they engage in than they have historically. So the play here is really just only letting Fannie and Freddie do their simple guarantee business that everyone understands and to force them to hold so much capital that their agency mortgage-backed securities never have liquidity concerns. The government can also modify their existing commitment so that it remains outstanding, an explicit limited guarantee. The writing is on the wall. The two key people here are Mark Calabria and Steven Mnuchin. Congress is welcome to pass reform, just like they have been for 10 years, but I'd put odds of that at 0%. The big banks got their victory by forcing uneconomic risk sharing transactions so their push hasn't entirely been in vain. All the people who took actions to try to keep the GSEs in conservatorship and wind them down have more or less moved on to fighting other battles.

Glen Bradford
4.57K Followers
Glen Bradford MBA contributes to Seeking Alpha primarily to read people's negative feedback so that he can avoid generating unnecessary losses. "Uncertainty will certainly work for me." - Glen Bradford March 2009.Glen wishes you a bright sunny warm day filled with smiles, laughter, and love.The Supreme Court got it wrong, which is sad, but it's not over yet.
Follow