After being in a downtrend for the last 13 months, the share-price of U.S. Gold Corp. (NASDAQ: NASDAQ:USAU) has caught a bid since end of March. Technically speaking, the stock broke out of a multi-month bullish wedge to the upside uncovering a short-term upside potential towards at least US$1.30.

Long-term, U.S. Gold Corp. is a value play as one of its assets in Keystone, on the prolific Cortez Trend in Nevada, could see a major gold discovery by renowned geologist Dave Mathewson. At the same time the value (an estimated US$178 million net present value according to the PEA) of the second asset, the Copper King Project in Southeast Wyoming, is certainly not reflected by the current stock price with a market cap of about 19 Mio. US$ and US$ 3 Mio in cash.

According to the latest press release, U.S. Gold Corp. has appointed the Honorable Ryan K. Zinke, a former Congressman and 52nd US Secretary of the Interior for the Trump Administration, to its Board of Directors. The appointment has brought U.S. Gold Corp. into the headlines, and at a price of US$ 1.05 the stock offers a very good risk/reward in my humble opinion.

In my humble opinion, the fact that all the weak hands have been shaken off during the stock's slide from US$3.30 down to US$0.75 while there are only 19 Mio. shares outstanding, reduces the remaining downside dramatically. 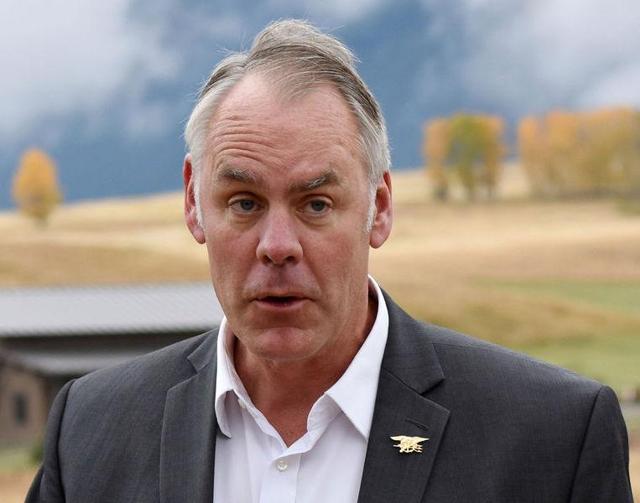 On April 16th U.S. Gold Corp. announced that the Honorable Ryan K. Zinke has been appointed to the Board of Directors. Zinke is a credible geologist from Montana and brings his in-depth mining industry regulatory contacts as well as his long-term experience to the board. During his work as Secretary of Interior he reduced bureaucracy and changed a few important rules for the mining industry. He especially promoted oil drilling and coal mining by expanding federal leasing, cutting royalty rates, and easing land protections despite environmental protests.

According to Reuters, U.S. Gold Corp CEO Edward Karr said: “Zinke has a lot of credibility in the mining industry. We think his credibility and gravitas will give us visibility, which we need to advance the company and benefit our shareholders."

All of the Directors of U.S. Gold Corp. are thrilled to welcome the Honorable Ryan Zinke to our Board. As the former Secretary of the Interior and a geologist, Commander Zinke has an in-depth knowledge of the governmental regulatory and permitting process for mining and exploration companies. We look forward to his future contributions to the overall Board, technical committees and permitting assistance with our Copper King project in Wyoming. 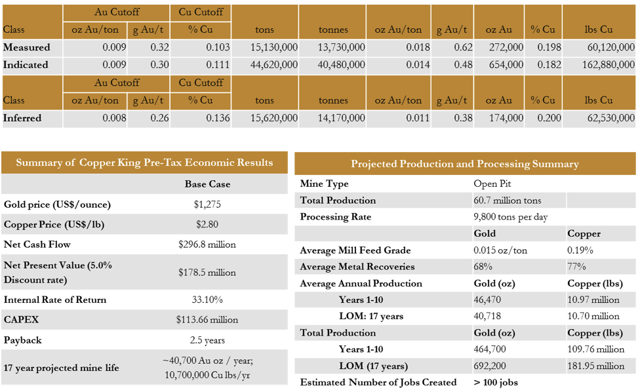 Considering Zinke's track record, he might indeed be able to help U.S. Gold Corp. in its permitting process at its gold-copper project Copper King in Wyoming. Currently this gold advanced exploration and development project is going through state environmental reviews and regulations. So far the preliminary economic assessment (PEA) prepared by Mine Development Associates shows 926,000 measured and indicated oz Au and 223mm lbs Cu plus 174,000 Inferred oz Au and 62.5mm lbs Cu with a theoretical pre-tax $178.5 million net present value at $1,275/oz Gold and $2.80/lb Copper.

Located in the mining-friendly location in the Silver Crown Mining District of southeast Wyoming, Copper King remains open in multiple directions for resource expansion. And while Wyoming is the top coal-mining state, it has little conventional hard-rock mining compared to other Western states. Now after being idle for decades, recent test drilling at the Copper King mine, located on state land 20 miles west of Cheyenne, are showing profitable quantities of gold, copper silver and zinc. 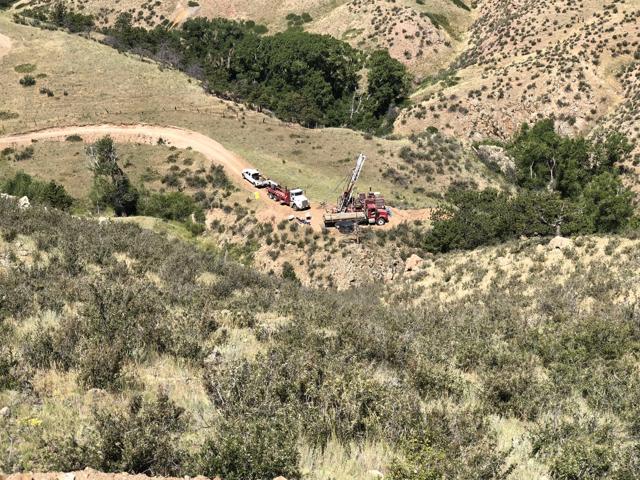 In February, U.S. Gold Corp. presented a comprehensive drill hole analysis by Datamine of Denver, CO. Datamine included all of the historic drilling database as well as the step-out drill programs conducted by U.S. Gold Corp. in 2017 and 2018, that successfully encountered additional mineralization and expanded the deposit to the west and southwest. The Datamine model shows that the deposit remains open to the southwest and also to the southeast and appears to have a curved configuration as opposed to a more confined, previous west-northwestward tabular configuration.

Backed by the positive PEA, I believe that Zinke will help to progress the permitting process for a low capex, near-surface, open-pit production.

At the same time, Zinke might also start interacting with the Interior’s Bureau of Land Management (BLM) in Nevada, where U.S. Gold Corp owns the Keystone project, consisting of 650 mining claims on a major gold trend on federal land. Here the company wants to prove a world class deposit and attract interest from mining giant Barrick Gold (GOLD), which owns property to the north of the Keystone project.

So far U.S. Gold Corp consolidated an entire district (20 square miles) on the Cortez Trend in Nevada. This district has never been previously consolidated nor systematically explored by model-driven, modern-day exploration techniques. 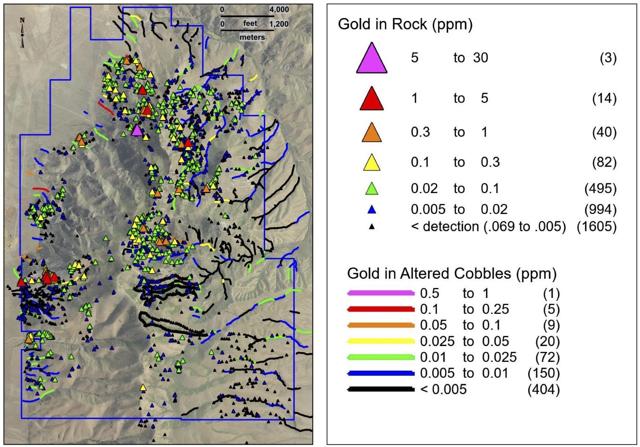 The NNW-trending Sr.706 line likely represents a major crustal suture favorable for development of gold-bearing hydrothermal systems and deposits. And with similar host rock (very similar in character and thickness to the Pipeline & Cortez Hills), stratigraphy and a tertiary intrusive-centered, domed carbonate window, U.S. Gold Corp might be indeed on the edge of a larger deposit at Keystone. At least the geochemical data potentially demonstrate a large and complex, Carlin deposit-type system.

Technical Analysis: Breaking out of a bullish wedge 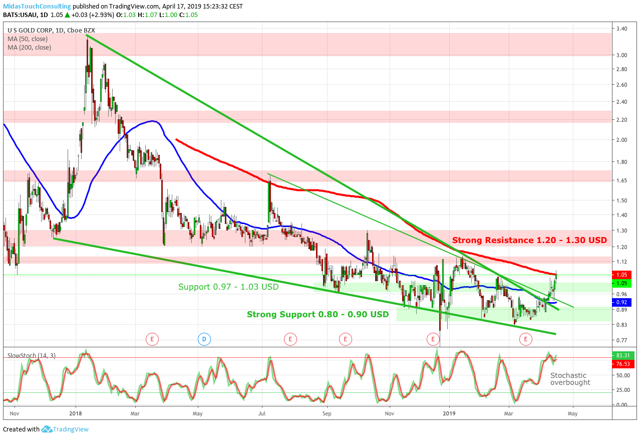 The stock price of U.S. Gold Corp has been in a year-long massive downtrend, which probably has flushed out all the weak shareholders by now.

Technically speaking, the stock has recently been breaking out of a falling bullish wedge and has recovered to the falling 200 day moving average ($US1.05). The next resistance zone sits around $US1.10. A move above the strong resistance around $US1.20 - 1.30 would signal a trend change in the larger picture. Short-term the move out of the wedge looks promising and could send the stock towards at least US$1.10. The only downside might be the slightly overbought stochastic oscillator which could force a retest of the breakout level first.

With the strong support around US$0.80-0.90, long-term investors do find a good risk/reward ratio at current levels.

U.S. Gold Corp certainly made a smart move by adding such a credible and well-connected figure to the board. With only 19 Mio. shares outstanding, the tight share structure could quickly push the stock price to former highs should the company indeed hit a deposit. The last time the stock had similar setup, U.S. Gold Corp quickly tripled in just a few months. At current depressed prices U.S. Gold Corp. seems to be a promising exploration and at the same time value play.

Florian Grummes
4.41K Followers
Florian Grummes is an independent financial analyst, advisor, consultant, trader & investor as well as an international speaker with more than 25 years of experience in financial markets. Via Midas Touch Consulting he is publishing weekly gold, silver, bitcoin & cryptocurrency analysis for his numerous international readers. Florian is well known for combining technical, fundamental and sentiment analysis into one often accurate conclusion about the markets. www.midastouch-consulting.com
Follow

Additional disclosure: This article covers one or more microcap stocks. Please be aware of the risks associated with these stocks.
Business relationship disclosure: I wrote this article myself, and it expresses my own opinions but U.S. Gold Corp. (USAU) has been a sponsor on my website. I am therefore biased. Do your own due diligence.