First National Corporation (NASDAQ:FXNC) was incorporated in 1983 as a holding company for its subsidiary, First Bank, which first opened for business in 1907. First Bank is headquartered in Strasburg, Virginia and has branches throughout the Shenandoah Valley and Central Virginia. According to FDIC market share reports, the company has 10.15% of total deposits in its market area, ranked fourth overall.

The financial crisis had a delayed impact on First Bank’s bottom line. The company reported shrinking, but positive earnings in 2008 and 2009, before reporting losses of $3.6 million and $10.96 million in 2010 and 2011. Harry Smith was the CEO of 25 years before retiring in 2011. In May of 2011 Smith was replaced by Scott Harvard, who has done an excellent job turning the bank around.

Since 2012 (Harvard’s first full year as CEO) First Bank has grown earnings per share from $0.48 to $2.04 in 2018. The company has averaged an impressive return on equity of 12.38% over this seven-year stretch. According to Harvard’s 2018 letter to shareholders, the company does not have a single foreclosed asset on the balance sheet for the first time since he arrived in 2011.

First Bank has one of the stickiest and cheapest deposit bases in Virginia. Deposits have grown from $469 million when Harvard took over to over $670 million as of the end of 2018. 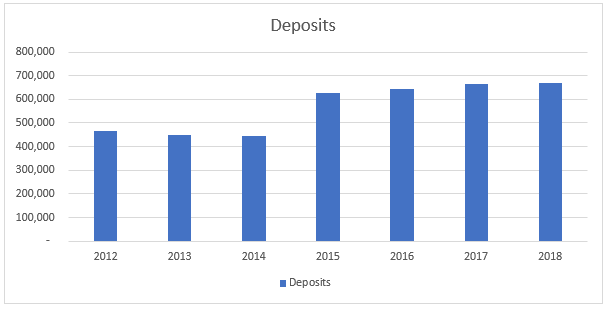 Deposits jumped in 2015 when the bank acquired six branched from Bank of America, adding $186 million in deposits. The acquisition also lowered the bank’s overall cost of deposits, as the acquired deposits had an average cost of 0.19% at closing. The remainder of the growth in deposits has been organic. 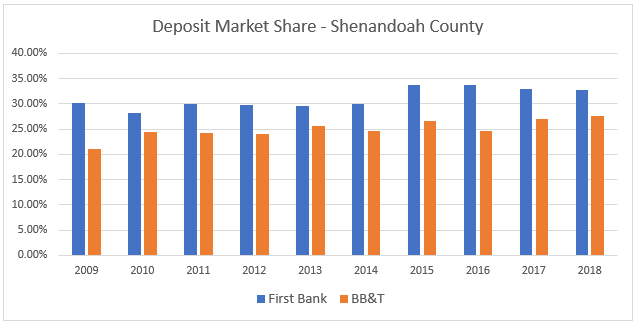 The bank’s deposits are also among the cheapest in the state, as they have shown in their most recent investor presentation (as of 9/30/2018): 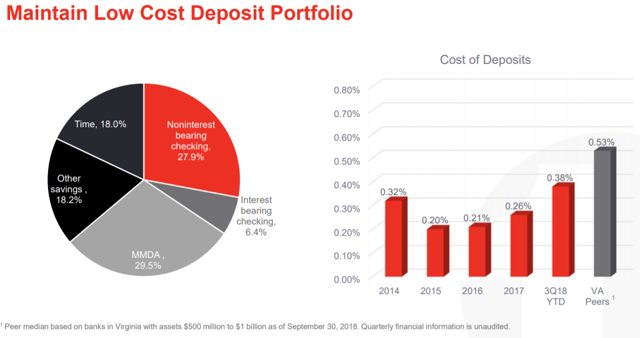 After accounting for the bank’s other sources of funding ($14 million in subordinated and junior subordinated debt), the total cost of funds is still just 0.51% as of 12/31/2018.

After going through some difficult times in 2010 and 2011, First Bank has cleaned up its balance sheet in the last several years. FRED puts out a data set on Non-preforming loans as a percentage of total loans for all U.S. banks, and here is how First Bank compares over the years: 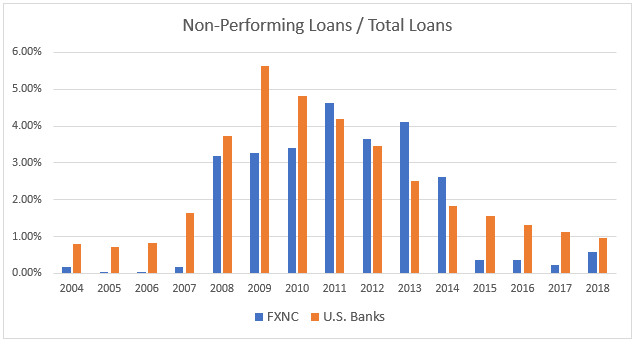 In 11 of the last 15 years First Bank has had lower NPLs than the average bank, and for the last four years consecutively. And more importantly, First Bank has a higher quality loan portfolio than its Virginia peers as well: 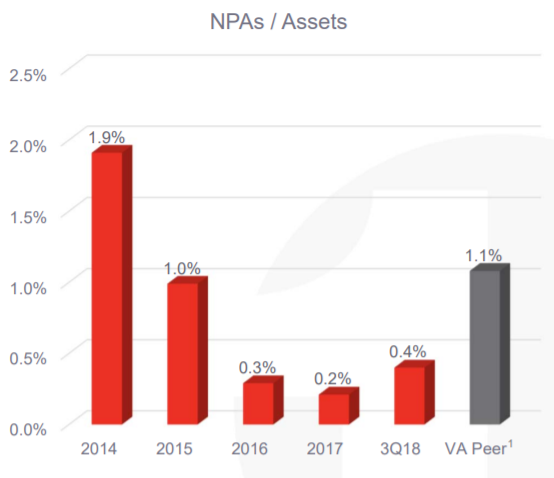 I will use the following three approaches to value First Bank: Peer comparison, recent mergers, and a dividend discount model.

Peer comparison – To compile a list of First Bank’s peers, I used the Virginia Association of Community Banks membership list to find all of the publicly traded community banks in Virginia. I excluded both Eagle Bank and Union Bankshares because they are outliers in terms of size. This left me with a list of 21 banks excluding FXNC with assets ranging from $2.7 billion to $240 million. Here is how First Bank compares to its peer group:

First Bank’s equity is more expensive than its peers, but its earning power is much greater. For that reason, I feel P/E is the more appropriate multiple to use when valuing first bank relative to its peers. By applying the median peer group P/E multiple to First Bank, I get a value of $27.40 per share, or a 23% premium to today’s closing price (4/26).

Recent Mergers – I looked at three recent community bank mergers that were announced and closed in within the last twelve months in order to determine what a buyer would be willing to pay for First Bank. The three mergers I looked at were American National Bankshares/Hometown Bank, Park National Bank/CAB Financial and CapStar Financial/Athens Bancshares. Here are some details on the three mergers:

By applying the lowest of the threeP/TBV multiples to FXNC, I arrive at a value of $25.03 per share.

By applying the lowest of the three core deposit premiums to FXNC I arrive at a value of $25.62 per share.

I consider these to be very conservative assumptions because First Bank has higher returns on equity than the three acquired banks listed above. 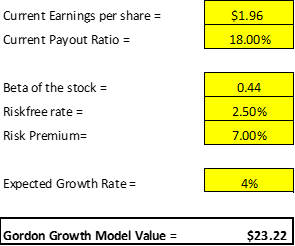 I believe a 4% growth rate is conservative considering the company has compounded tangible book value per share at an 8% rate for the last five years.

After piecing together the three valuation methods, I believe First Bank is conservatively worth somewhere between $23.22 and $27.40. This is a wide range, but the point is you don’t have to make too many leaps to see that the stock is modestly undervalued based on the current price of $22.25. For a bank with returns on equity well above its industry and peer averages, I consider this to be an attractive investment opportunity.

Chantilly Capital
66 Followers
Individual investor based in Washington, DC. Focused on small and micro-cap value stocks in the U.S. Sectors of interest include: financial services, technology/software, and industrials.

Disclosure: I/we have no positions in any stocks mentioned, but may initiate a long position in FXNC over the next 72 hours. I wrote this article myself, and it expresses my own opinions. I am not receiving compensation for it (other than from Seeking Alpha). I have no business relationship with any company whose stock is mentioned in this article.