Wednesday May 1: Five things the markets are talking about

With most of continental Europe and Asia closed for the May 1 bank holiday, trading ranges have been tightly contained with thin liquidity as we wait for the main event for today - the Federal Open Market Committee (FOMC) monetary policy announcement.

US equity futures and UK stocks have advanced this morning following Apple's upbeat forecast after Tuesday's market close. Treasuries and the US dollar remain in a holding pattern as investors wait for clues on direction, especially from Fed Chair Powell's press conference after today's rate announcement (02:30 pm EDT).

There is a lot on the line for the Fed today - no rate hike is expected but will Chairman Powell follow through and reiterate his most recent 'dovish comments? The Feds integrity is at stake here, Powell needs to keep to 'his script,' a 'dovish' stance otherwise he is expected to lose some degree of respect from the street.

Elsewhere, WTI oil futures are under pressure on signs of a sharp increase in US crude inventories and concerns over global demand.

On the Sion-US trade front, Treasury Sec. Mnuchin reiterated that they had productive talks in Beijing on trade and that negotiations are to resume back in Washington.

1. Most equity bourses are closed for May 1, except…

Markets in Japan remain closed for Golden Week, reopens May 6, while a number of other countries are set to follow suit today - China, Hong Kong, S. Korea, Switzerland, Germany, France and Italy.

Down-under, Aussie stocks closed out just shy of an 11-year peak overnight, after a surprise earnings beat from some financials supported risk appetite. Nevertheless, trading volumes were fairly low ahead of the conclusion of the Fed's two-day meeting. The S&P/ASX 200 index rose +0.8% at the close of trade. The benchmark fell -0.5% on Tuesday.

In Europe, with the continent closed for Mayday, investors focus has turned to the UK The FTSE trades slightly higher this morning, while the US Index futures point to a higher open supported by stronger results from Apple after the close last night, and this after reporting above forecasts and Q2 guidance ahead of estimates. Shares are up over +5% in the premarket. 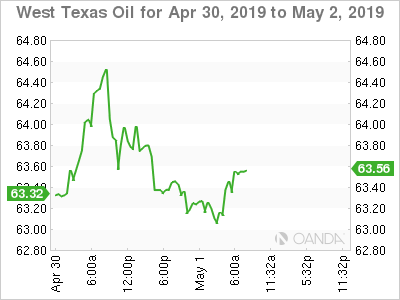 Oil prices are again under pressure after reports this week show a rise in US crude inventories. Also adding concerns, is the intensifying political crisis in Venezuela, tightening US sanctions on Iran, and ongoing OPEC+ supply cuts.

API data yesterday showed that US crude stocks rose by +6.8M barrels to +466.4M barrels in the week to April 26.

Market focus is also conscience of the ongoing crisis in major oil producer Venezuela, where there is a standoff between President Maduro and opposition leader Juan Guaido. The situation remains fragile and at a tipping point that could lead to much more violence and further disruptions to crude supply.

Already on the supply side, oil markets have already tightened this year due to supply cuts led by the OPEC+ as well as US sanctions on Iran's oil exports.

Note: OPEC is due to meet next month to discuss its production policy. Trump continues put pressure on the group to increase output to make up for the shortfall from Iran, OPEC's de-facto leader Saudi Arabia said on Tuesday it had no immediate plans to raise output. 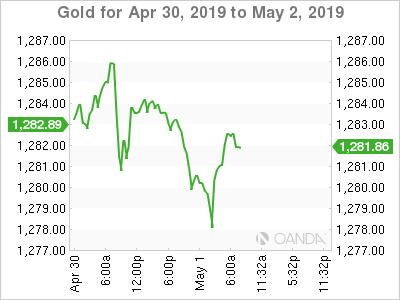 3. Yields confined to a tight range

The Fed is expected to disappoint President Trump later today by keeping interest rates unchanged despite Trump's repeated calls for it to start cutting rates. Officials are expected to keep the interest rate on hold at between +2.25% and +2.5% and remain patient. The market is currently pricing in a +50% chance of a rate cut this year (September).

However, many of the risks that nudged the Fed toward patience have since faded. Unstable markets have rallied, financial conditions have eased, spending has rebounded and US growth was better than expected in Q1. Fed Chair Powell's press conference will be keenly watched for clues for the future (02:30 pm EDT). Hence, there is potential for the Fed to be more optimistic on the economic situation.

Elsewhere, the odds of a Reserve Bank of New Zealand (RBNZ) rate cut rise after weaker than expected Q1 employment change overnight (-0.2% vs. +0.5%) and private wages data - dealers are now pricing in a +56% chance of rate cut at May 8 meeting vs. +40% prior.

Central Bank of the Republic of Turkey (CBRT) yesterday announced that it has vowed to use all its tools to curb inflation as it seeks to reassure markets that it would not soften its monetary policy. Officials dropped their pledge to deliver further tightening if needed at its last decision. 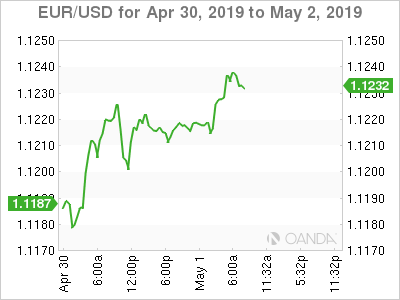 The USD remains slightly on the defensive as market focus shifts to the FOMC decision. Dealers noted that the greenback could recover some lost ground if the Fed became more optimistic on the economic situation.

The pound has extended its gains slightly after the UK manufacturing PMI survey fell to a two-month low but stayed comfortably above the 50 level that separates growth from contraction. The pound's rise is very limited, however, as concerns remain over how Brexit uncertainty is impacting the economy. It last traded up +0.3% at £1.3075. 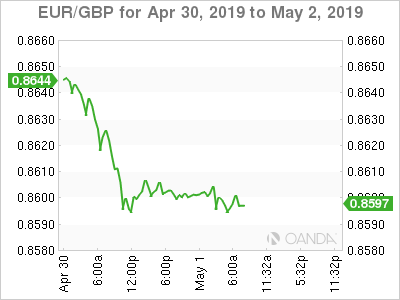 IHS Markit data in the UK this morning showed the manufacturing sector activity "cooled-off" sharply from its thirteen-month highs in April.

The April manufacturing PMI fell to 53.1, down from March's 13-month high of 55.1. PMI rose in March because of Brexit stock-building, which continued in April, "albeit to a lesser extent than in the prior survey month," said IHS Markit. "Output growth slowed from March's ten-month high," it said.

Digging deeper, rates of expansion eased sharply in the intermediate and investment goods sectors, in contrast to a mild acceleration at consumer goods producers. The upturn in new work received also weakened, as domestic market conditions remained subdued and new export business contracted. The month of April saw overseas demand decrease at the "second-fastest pace in the past four-and-a-half years." 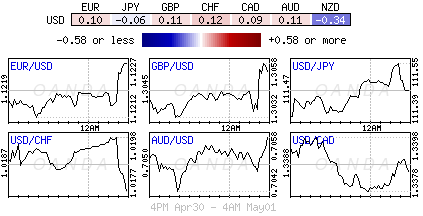