The purpose of this article is to assess the macro-fiscal flows for Russia and determine what effect these flows will have on the stock market and the economy.

The chart below shows the national budget information to the present day over a ten year period tracked alongside the stock market. 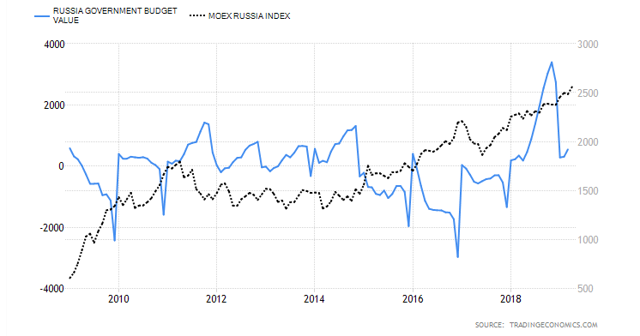 The federal government budget is important as these flows can be a significant percentage of GDP as the chart below shows. 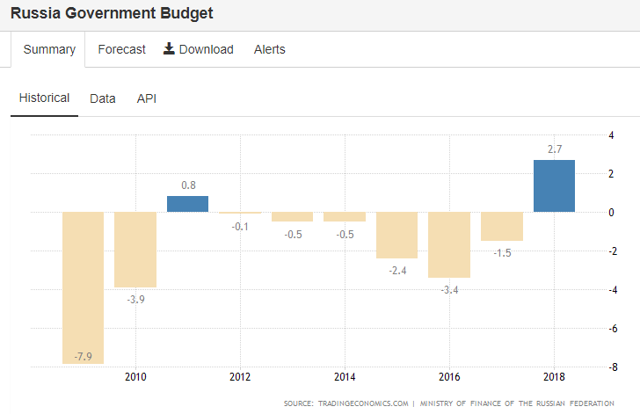 The chart below shows credit creation for commercial banks over the same ten year period. 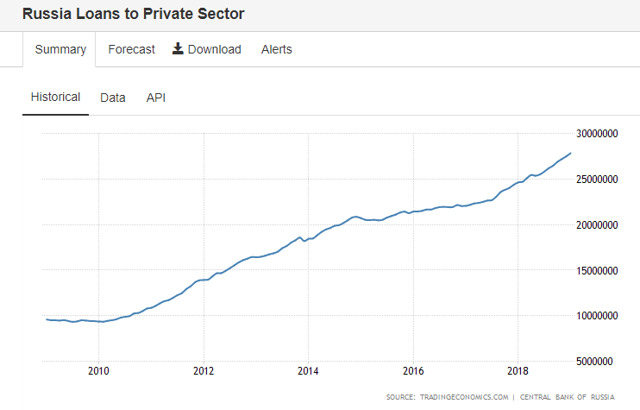 The credit industry is small in terms of percentage of GDP and plays no significant role.

The following chart shows the current account over a similar period: 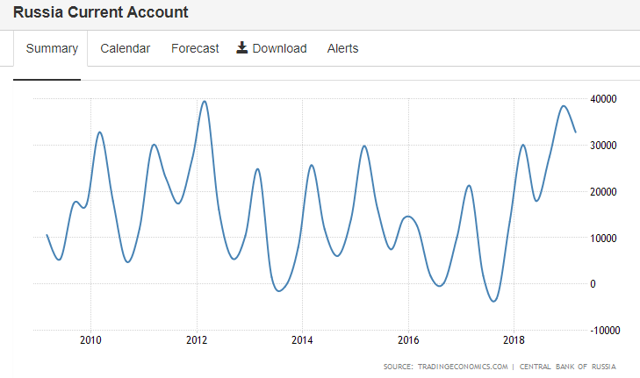 Russia's current account is important as it constitutes a significant percentage of GDP, see chart below, and is generally in surplus and has strengthened with the price of oil and commodities over the last eighteen months. 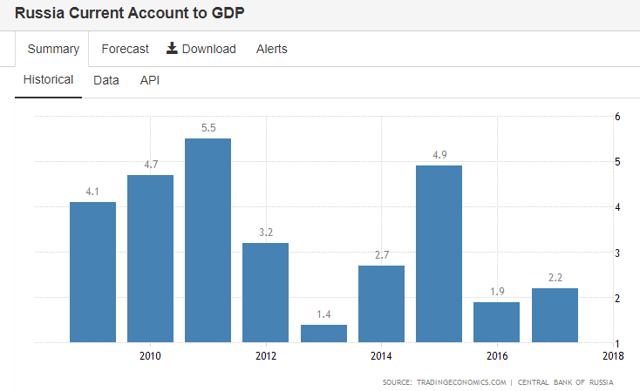 What becomes relevant for a developing nation is to what level it has been loaded up with foreign debt, and this is shown in the chart below. 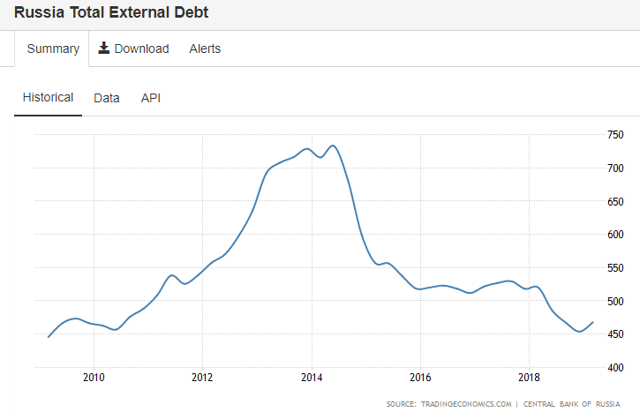 Russia has over 467 USD Billion in foreign debt, most probably denominated in USD and Euros. This is about 29% of GDP and makes Russia vulnerable to outside influence. Russia has had external debt troubles before:

Trade and financial dependency were deemed to be part of an economically efficient global specialization of labor and credit. But Mexico's insolvency in 1982 interrupted lending and investment until 1990, by which time Argentina and Russia were obliged to pay 45 percent interest on dollar-denominated debts. This exorbitant rate reflected their failure to develop along lines leading to economic and financial self sufficiency. Investors nonetheless started to lend again, having discovered a new source of foreign exchange. Debtor-country governments might pay their creditors by selling off public enterprises. These privatization programs were voluntary pre-bankruptcy forfeitures, as if governments were not sovereign debtors able to retain the public domain under their own control by obliging bankers and bondholders to absorb the losses resulting from their bad loans.

Since 2014 Russia has moved to significantly reduce its level of external debt. It has almost been halved in the time. This is a significant achievement.

Taking the above information for international and national macro-fiscal flows, one can calculate the sectoral balances, and these are shown in the table below.

*Estimate to be updated when the end-of-year numbers are known.

#Forecast based on existing flow rates and plans.

Impact on the Stock Market

The first chart above shows the impact of national government expenditure on the stock market.

When the government expenditures have been flat or negative the stock market has been flat or in decline. The period between 2011 and 2015 is a good example.

When the national government spends money into the economy this becomes private sector income and causes the stock market to rise when some of this income reaches the stock market. The period between 2015 and 2018 is an example of this.

Recent data shows that the national government has begun removing money from the economy with surplus budgets and one can expect a return to declining and at best flat markets until this trend stops. Only a large external surplus can bring the private sector balance back into more positive territory and cause rising asset markets.

For the above reason a long term investment in the Russian stock market is not recommended at this time, however, the seasonal trade of buying in September and selling after October to ride the national government spending flow of funds is valid each year.

The remaining influence are international fiscal flows. The chart below was kindly produced for me by Mr. Robert P. Balan as part of his PAM service and shows global financial flows for the five largest developed economies in the world. I recommend the PAM service for its advanced fiscal flow analytical capabilities.

The chart shows that global G5 bank balances are bottoming at present and will rise sharply into June 2019. This means that the Russian tax take in July 2019 takes place at the same time as a global liquidity down-phase meaning that the stock market could well go lower than might otherwise be expected.

The October national government expenditure wave takes place against a background of rising G5 Central Bank liquidity levels and is positive for a short term rise in the Russian stock Market into the first quarter of 2020. 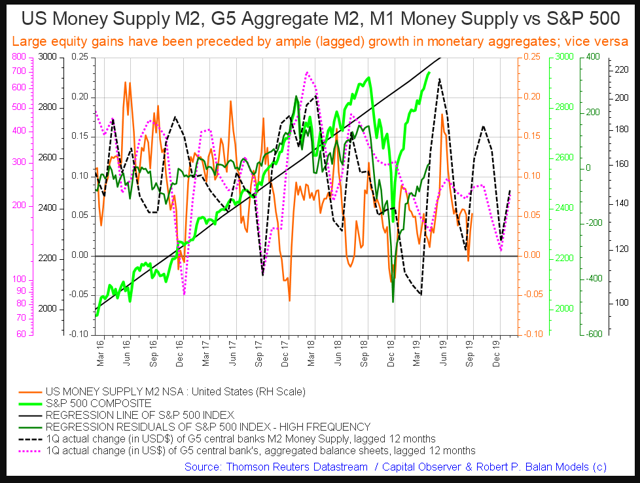 An investor wishing to trade these stock market movements could do so using the following Russian ETF funds that mirror the broad stock market index:

Alan Longbon
2.32K Followers
My investment approach is very simple. I find countries with the highest and strongest macro-fiscal flows and low levels of private debt and invest in them using country ETFs and contract for difference (CFDs)I use functional finance and sectoral flow analysis of the national accounts of the nations I invest in. This is after the work of Professors Wynne Godley, Micheal Hudson, Steve Keen, and William Mitchell. Roger Malcolm Mitchell, Warren Mosler, Robert P Balan, and many others.One can analyze a country in seconds with four numbers as a % of GDP and these are G P X C where[G] Federal spending.[P] Non-Federal Spending.[X] Net Exports[C] CreditOne can then derive a set of accounting identities that are correct by definition.GDP = G + P + XAggregate Demand = G + P + X + C or GDP + Credit.GDP = GDIG and X are regularly reported in official national account statistics and one can work out P as follows:P = G + XAsset prices rise best where the macro-fiscal flows are strongest and where the private sector balance is highest.The 20-year land/credit cycle identified by Fred Harrison and Phillip Anderson is also a key investment framework that I take into account.
Follow