Regulatory shocks on the Chinese Fintech sector are expected to clear out by the end of the year and should have no material impact on the current listed companies.

The 2018 Q4 earnings results from most companies showed that growth momentum is back.

Leading companies in each sub-sector present good entry opportunities with profitability in the coming 6-12 months.

It’s been more than a year since we first covered the Chinese Fintech sector. The industry has experienced/changed a lot in the past year, and we believe now would be a good time for an update.

Fintech: One of the Largest Sectors for US-Listed Chinese Companies

Starting 2017, we have seen a booming in Chinese Fintech companies’ IPOs. Six Fintech companies got listed in 2017, raising a total of $ 1.57 billion. When all the Chinese Fintech companies were enjoying the exploding demand and shining financial numbers, on November 21, 2017, an administrative order issued by “Internet Banking Risk Management and Regulation Office” (the “Office”, a sub-organization of China’s Central Bank) broke the dream of gold miners. The “order” (often referred to as “Order 138”) called off the issuance of new online P2P company licenses.

Shortly after, on December 1, 2017, the “Office” issued another order (often referred to as “Order 141”) with more specific requirements as regards online lending business, including capping the annualized interest/fees for any lending products at 36%, and punched hard on illegal collections.

The results from this regulatory tornado were catastrophic for the listed companies: 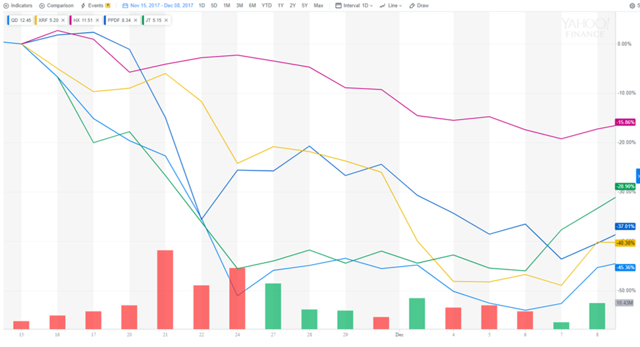 The five companies that were listed prior to the orders were hit pretty badly, losing somewhere from 15% to 50% of their share prices within weeks. (LexinFintech Holdings (LX) was lucky in the sense that it went public after the “order” was released, so its price was not hammered. On the other hand, because of the “order”, LX had to reduce the IPO size from US$500 million to US$108 million.)

This wave of regulatory shock, however, did not slow down the IPO process of the Chinese Fintech sector. There have been another seven Fintech companies listed in the US market in 2018, making it one of the largest sectors of Chinese companies in the US market (a total of 14 listed companies):

The regulatory impact on the IPOs, however, was mainly on the amount raised. Compared to the $1.57 billion total IPO size in 2017, the seven IPOs in 2018 only raised $0.3 billion, many of which experienced prospectus modifications for reducing the target amount. For companies like QFIN, with revenues and net income at $607.57 million and $173.48 million (2018 number), the $51.2 million raised from its IPO has more symbolic meaning than serving the real capital needs.

So, why do they have to go for an IPO at such an unfavorable moment? We think the major reason is the current regulatory environment.

You should be fully convinced that this sector is highly sensitive to regulatory impact by now. Along with the release of “Order 141”, the regulators came up with the requirements on filing registration for all the peer-to-peer lending institutions. The registration was initially required to be finished by end of June 2018. However, due to the lack of standards and clear guidance, the registration has been pushed back. Instead, on August 17th 2018, the “Office” issued another order on implementing compliance inspection of P2P companies, as well as a detailed check list on the potential compliance issues that the companies should look into (often referred to as “108 Items”).

This new guidance has then served as the standard for all the P2P institutions to obtain a legal identification to operate the business. However, there has been no issuance of official P2P license to any company so far. According to Mr. Yihan Fang, the CEO of YRD, the company's P2P compliance and inspection process is still going on:

On December 19, 2018, the “Office” published another order (referred to as “Order 175”), focusing on classifying the P2P institutions based on their operational risks, and clearly requiring the closure of high-risk, non-compliant platforms.

Since there is still a lot of uncertainty regarding getting final approval of the license/registration from the regulator, Fintech companies have been trying all the ways they can to showcase that they are capable and determined to play in this field. Out of all the approaches taken, IPO is apparently one that has a lot of convincing power for society as well as the regulatory authorities that the company is credible and capable. Since a lot of the compliance requirements are rather qualitative in nature, an IPO on the US market will serve as an important evidence that the company has established sufficient risk management systems as well as good business prospects.

In our opinion, although the regulation is still evolving and a lot more details are to be sorted out, the current listed Fintech companies are in a relatively safe place in terms of meeting the compliance requirements.

A Deep Dive into the Business Landscape

Out of the 14 US-listed Chinese Fintech companies, there are three main business models:

This is the most common business model that is adopted by majority of these companies. This is also the closest to what we have referred to as “P2P”. Take YRD, for example. The company mainly plays an intermediate role by connecting investors and borrowers through the loan product offerings. 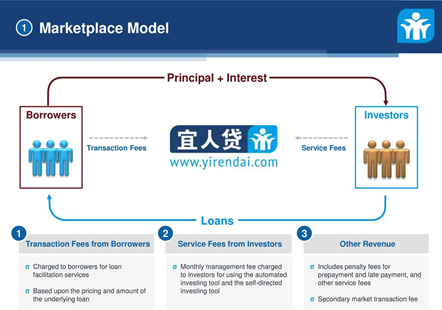 The table below shows the revenue structure for major marketplace companies based on the latest 2018 Q4 earnings release:

As seen from the table, fees charged from loan facilitation contributed more than 90% of the revenues for most of the marketplace companies. YRD has a different revenue structure compared to others, with 33.1% of its revenues coming from financing income. This is due to its unique funding arm, “Yiren Wealth”, which serves as a major wealth management business for high-net-worth individuals in China. This diversified revenue structure prevented YRD from suffering as much in the 2017-2018 regulatory shock as its peers listed in the table.

For the companies operating under a marketplace model, 2018 Q4 earnings results show that although they have not entirely recovered from the regulatory shock of 2017-2018, revenue growth is coming back: 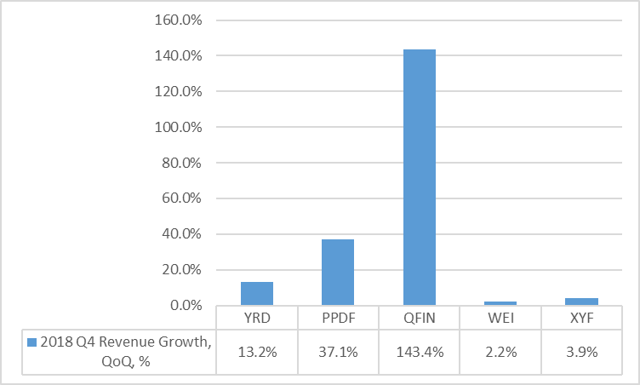 This also led to the fact that the stock prices of the companies have achieved gains from 10% to 40% in 2019 year to date: 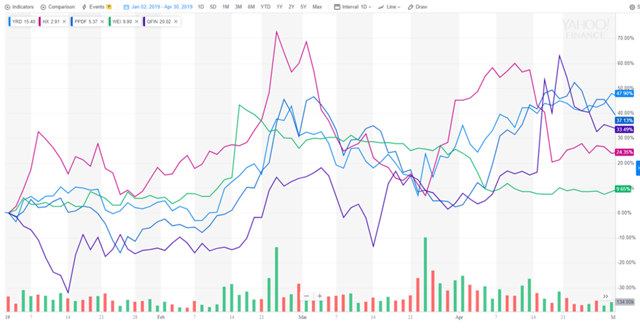 Within this segment, our recommendation is to focus on YRD and QFIN:

The second type of business is to provide technology-based services. JT and PT are two representative companies in this category. JT defines itself as a “leading independent open platform for discovery and recommendation of financial products”, similar to the US financial platform BankRate.com. JT’s revenues came from three main sources:

PT, on the other hand, focuses more on providing technology solutions and system implementation services to financial institutions. Based on Q4 2018 earnings results, more than 75% of PT’s revenues came from “Technical service fees”.

When the macro economy and the industry as a whole was suffering from shrinking demand, the technology and service providers were hit even more. PT’s priced dropped more than 45% since its IPO last October, while JT’s share price was also hammered after its Q4 earnings release. 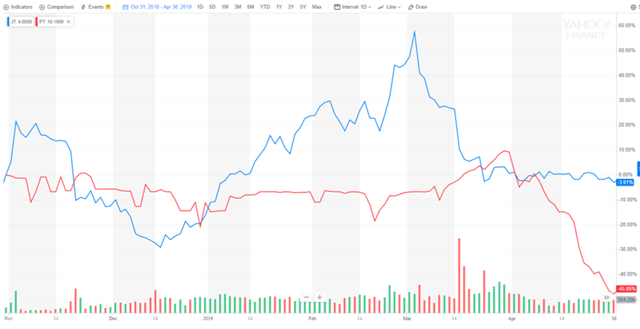 Our recommendation is to keep away from this sub-sector until the regulatory shocks clear out and the industry gets back on track again.

LX and QD, as we have discussed in this article, both started their business from “Campus Loans” and gradually turned into the direction of a combination of e-commerce and finance. The difference is that LX has been focusing on retail e-commerce (such as electronic products) and providing short-term financing for consumers, while QD has turned to auto finance for its growth ambition. Due to the nationwide slowdown in auto sales, QD’s Dabai Auto business proved to be a failed attempt in the past year.

Based on 2018 Q4 earnings results, QD has transformed its business towards credit provider and marketplace, with 50% of its revenues coming from financing income and 32% from loan facilitation income, leaving only 17% coming from sales-related income. On the other hand, LX still generated 37.5% of its revenues from sales-related income, making it the only Fintech company that has a significant focus on the E-commerce business.

Both QD and LX have reported great Q4 earnings results, beating the expectations on EPS and revenues: 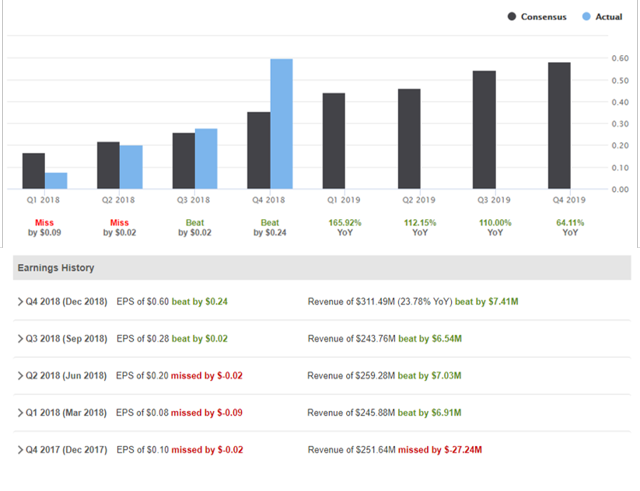 Their stock prices have also reflected the comeback of their momentum, with both rising more than 70% year to date: 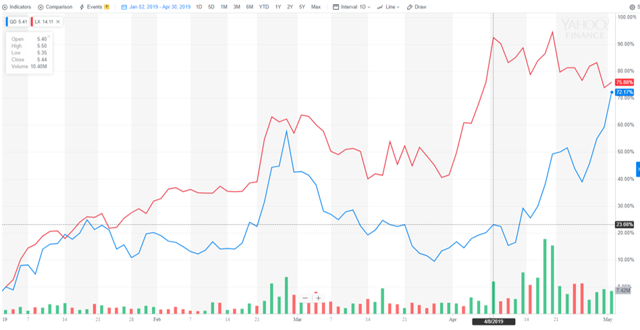 We recommend a long position in this sector, especially on LX, since the most recent earnings results prove this stock to be mostly underpriced.

The biggest risk factor here is still regulatory impact. We expect the entire regulation shock to clear out in the second half of the year. At the same time, we have more confidence in the current listed companies to suffer less from the future regulatory impacts.

We think now would be a good time to put Chinese Fintech sector back on our radar again. We expect the previous regulatory shocks to be cleared out by end of the year, and to benefit instead of hurt the current listed companies in the future. The Q4 earnings results also showed that the growth momentum is back. YRD, QFIN, and LX are the ones where we see a good entry opportunity now.

Disclosure: I am/we are long YRD. I wrote this article myself, and it expresses my own opinions. I am not receiving compensation for it (other than from Seeking Alpha). I have no business relationship with any company whose stock is mentioned in this article.

Follow Aiden Research and get email alerts
+
Add a comment
Disagree with this article? Submit your own.
To report a factual error in this article, click here.
Your feedback matters to us!