Healthcare stocks normally react to political rhetoric, but the speed and magnitude of the recent correction in the sector have been surprising. Despite bipartisan clamoring for broad changes to the healthcare system and the Trump administration's push to lower prescription drug prices, we have not seen a material change in near-term fundamentals. The whole move has been sentiment driven, resulting in changes in the long-term or terminal value of companies across healthcare that could present selective opportunities.

The broad healthcare sector has underperformed the S&P 500 by about 700 basis points over the last month, but we are probably not at a bottom for most subsectors. Concerns will likely remain elevated through the 2020 election cycle, and possibly longer (if Democrats sweep with a more extreme candidate). At this point, most subsectors are still 30% to 40% from trough valuations reached in the 2008-2010 downturn (Exhibit 1). Relative to that period, industry fundamentals and growth are healthier, so valuations may not bottom as low as in the past.

Managed care stocks have seen the largest correction thus far, impacted by the growing "Medicare for All" clamor from progressive Democrats on Capitol Hill. True "Medicare for All," i.e. single payor, is an existential risk, but one we think is improbable. Federal and state governments likely need managed care to bend the cost curve of expensive Medicaid and Medicare Advantage programs. Managed care suffered through a similar dynamic from 2008 to 2010 but persevered, with companies like UnitedHealth Group (UNH) rebounding to all-time highs over time. The prescription drug value chain, which includes pharmacy benefit managers and other distributors, meanwhile faces real near-term business challenges and regulatory risks. These include recently announced government plans to reform rebates in Medicare Part D and drug payments in Medicare Part B. As a result, there is low visibility into earnings for these companies. 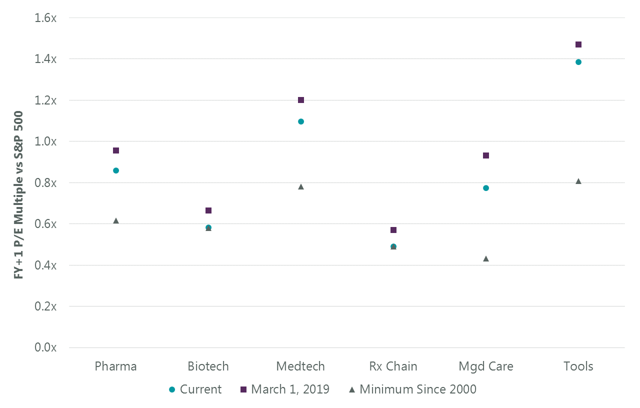 Biopharmaceutical companies also face risks from the proposed changes to Medicare Parts D and B. We believe these risks are manageable; however players in more competitive treatment markets will likely face worse risks than others. Management and Wall Street forecasts already reflect a tougher U.S. pricing environment, and we remain constructive about idiosyncratic opportunities in current product pipelines.

Two areas of healthcare, medical technology and tools companies, have held up better than the overall sector. Medical technology stocks have rerated due to better growth prospects and are perceived as being more insulated politically than drug makers and distributors. We also see some potential for greater utilization pressure under a single payor system. Healthcare tools stocks meanwhile have minimal exposure to "Medicare for All" and drug pricing. The multi-year outperformance of the group has also been driven by strong market conditions. The key question here is how long above-average growth rates will persist before normalizing.

ClearBridge Investments
1.61K Followers
ClearBridge is a leading global asset manager committed to active management. Research-based stock selection guides our investment approach, with our strategies reflecting the highest-conviction ideas of our portfolio managers. We convey these ideas to investors on a frequent basis through investment commentaries and thought leadership and look forward to sharing the latest insights from our white papers, blog posts as well as videos and podcasts.

Disclosure: I am/we are long UNH. I wrote this article myself, and it expresses my own opinions. I am not receiving compensation for it. I have no business relationship with any company whose stock is mentioned in this article.

Additional disclosure: Past performance is no guarantee of future results. The opinions and views expressed herein are of the Portfolio Managers listed as of the date shown, and may differ from other managers, or the firm as a whole, and are not intended to be a forecast of future events, a guarantee of future results, or investment advice. The statistics have been obtained from sources believed to be reliable, but the accuracy and completeness of this information cannot be guaranteed. Neither ClearBridge Investments nor its information providers are responsible for any damages or losses arising from any use of this information.