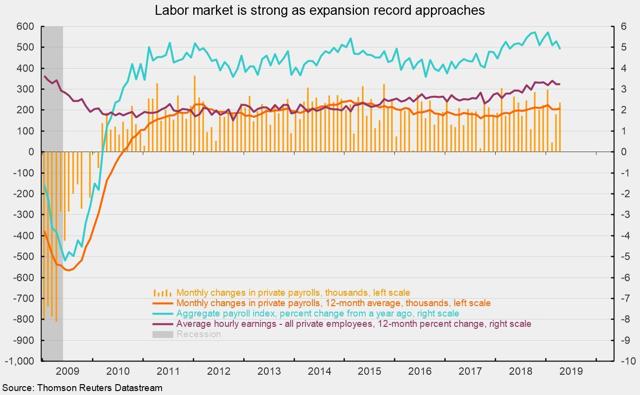 Payrolls in the United States rose by 263,000 in April, solidly beating an expected gain of 185,000. The healthy gain follows a solid 189,000 increase in March. Two strong monthly gains following the disappointing 56,000 increase in February shows the labor market remains healthy and will likely ease fears of recession. The three-month average gain stands at 169,000, well below the average over the past year of 218,000 but still a good result. The 12-month average had been rising after hitting a recent low of 168,000 in September 2017, but the weak February gain pulled the 12-month average down noticeably. Overall, the April jobs report was very positive and reaffirms a cautiously optimistic outlook for the economy.

The private sector added 236,000 jobs, slightly below the ADP Research Institute estimate of 275,000 new private sector jobs (see chart). Over the past 3 months, private sector payrolls averaged a gain of 154,000 and generated a 12-month average gain of 208,000. Over the last 100 months, since the start of 2011, private payrolls have averaged gains of 200,000 new jobs, a remarkable run. It's also remarkable to see such gains at this stage of an economic expansion. The current expansion is on track to tie the record for duration in June with a length of 120 months and set a new record for expansion should the economy continue to grow through July. Both seem highly probable at this point.

Private services industries added 202,000 jobs in April compared to 158,000 in March. Among the individual private services industries, professional- and business-services payrolls rose by a very strong 76,000 compared to a 12-month average of 45,000, health care added 62,000 employees in April, and leisure and hospitality added 34,000 jobs for the month. The weakest results were for retail industries, which have been erratic in their payroll gains, losing 12,000 jobs in April, and information industries, which lost 1,000 for the month.

Despite strong labor-market conditions, 490,000 people left the labor force in April, pushing the labor-force participation rate to 62.8 percent, down from 63.0 percent in the prior month. The drop in the labor force helped push the unemployment rate down to 3.6 percent in April, a new low for the current cycle and the lowest since 1969.

Average hourly earnings rose 0.2 percent in April, holding the 12-month change steady at 3.2 percent (see chart). Average hourly earnings growth has been drifting higher since 2015 after posting gains around 2 percent for most of the 2010-14 period. The length of the average workweek fell to 34.4 hours versus 34.5 in March. Combined, the gains in payrolls and hourly earnings along with hours worked resulted in a 0.2 percent increase in the aggregate-payrolls index in April and a 12-month rise of 4.9 percent (see chart). This index is a proxy for take-home pay and has been growing in the 4 to 6 percent range since 2011, providing a solid base to support consumer spending.

Overall, the employment report is very positive. The labor market remains the cornerstone of the current expansion and is supporting household incomes and consumer confidence. Economic data have been mixed since the government shutdown in December and January. More recently, economic data appear to have been firming, but caution is still warranted. Massive budget deficits and mounting federal debt together with uncertainty over trade and tariffs and global political and economic conditions provide more reason for caution. Nevertheless, today's report is reassuring and suggests that the current economic expansion is likely to become the longest on record over the coming months.

American Institute of Economic Research
1.38K Followers
AIER educates Americans on the value of personal freedom, free enterprise, property rights, limited government and sound money. Our ongoing scientific research demonstrates the importance of these principles in advancing peace, prosperity and human progress. www.aier.orgFounded in 1933, AIER is a donor-based non-profit economic research organization. We represent no fund, concentration of wealth, or other special interests, and no advertising is accepted in our publications. Financial support is provided by tax-deductible contributions, and by the earnings of our wholly owned investment advisory organization, American Investment Services, Inc. (http://www.americaninvestment.com/)
Follow
2 Comments
To ensure this doesn’t happen in the future, please enable Javascript and cookies in your browser.
Is this happening to you frequently? Please report it on our feedback forum.
If you have an ad-blocker enabled you may be blocked from proceeding. Please disable your ad-blocker and refresh.