In just a little more than a week after the mighty Newmont-Goldcorp merger was finalized, the company suspended operations of its largest gold-silver mine in Mexico.

The blockade was started due to issues with the local community in regards to water supply concerns and problems with a trucking contractor.

It will be interesting to see how the future unfolds for Penasquito with the new anti-mining President AMLO now running the show.

In just a little more than a week after the mighty Newmont-Goldcorp (NYSE:NEM) merger was finalized, the company suspended operations of its largest gold-silver mine in Mexico. The Penasquito Mine, which produced more than a 500,000 ounces of gold and 25 million ounces of silver in a single year, has been dealing with a blockade of its operations since March 27th.

The blockade was started due to issues with the local community in regards to water supply concerns and problems with a trucking contractor. However, the protests by the local community over water rights have been going on ever since the Penasquito Mine started operations in 2010.

According to the article, Goldcorp using excessive water at Peñasquito mine - critics, research by McGill Research Group, reported that the Penasquito Mine was using three times the amount of water than it originally agreed upon. Furthermore, the large open-pit gold-silver mine, located in the state of Zacatecas, was also consuming three times the amount of water supplied to the entire City of Zacatecas (population 129,000).

To get an idea the amount of water being consumed by the Penasquito Mine, I looked at the data from Goldcorp's most recent Sustainability Report. In 2017, the Penasquito Mine withdrew a staggering 7.9 billion gallons of water to supply its operations for the year. Of that total amount, 93% came from groundwater. That is one hell of a lot of water.

It will be interesting to see how long it takes for the suspension to end. However, with the election of the new President AMLO of Mexico, Andrés Manuel López Obrador, large foreign mining companies in Mexico may find it increasingly challenging to GET THEIR WAY as they have in the past with the help of pro-mining leaders.

Regardless, the Penasquito Mine produced the second highest amount of silver in Mexico last year: 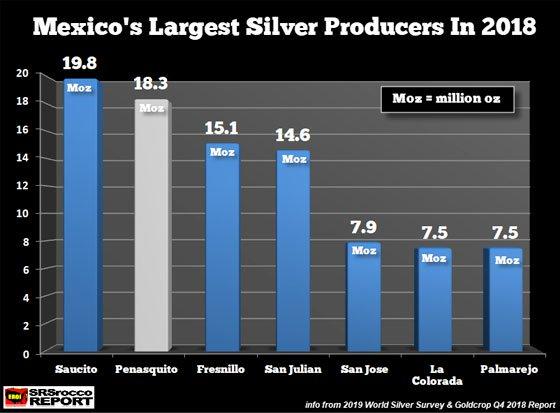 While Newmont-Goldcorp owns the second largest silver producer in Mexico, Fresnillo PLC (OTCPK:FNLPF) runs the other top three primary silver mines, Saucito, Fresnillo, and San Julian. With the suspension of mining operations at Penasquito, that's a potential loss of 18-20 million (Moz) of silver a year.

The real problem at Penasquito comes down the massive amount of water it consumes to process the enormous amount of ore it mines. For example, the Penasquito Mine, which produced 18.3 Moz of silver in 2018, processed a stunning 35.2 million tons of ore to get that silver. Yes, it's true that the Penasquito Mine is mainly a gold producer, but it still provides a great deal of silver.

If we compare the amount of processed ore by the top silver producers in Mexico, it's no wonder why the locals are concerned about the local water supply being consumed by Penasquito. 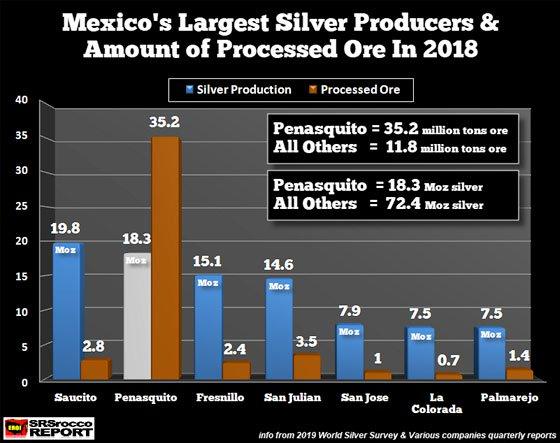 Here we can see that Penasquito, producing 18.2 Moz of silver, processed more ore (35.2 million tons) compared to all the other primary silver miners in the group (11.8 million tons). Thus, the Penasquito Mine processed three times more ore to supply six times less the silver from all the other primary silver miners (72.4 Moz).

The Penasquito Mine's average gold yield last year was a minuscule 0.24 grams a ton, and the silver yield was only 16 grams per ton. Compare that to the average gold yield of the top four gold miners at 1.26 grams per ton in 2017 and the top eight silver miners average yield of 233 grams per ton. Which means the Penasquito Mine has to move five times the amount of ore to produce the same amount of gold as the top four gold miners and a 15 times more ore than the top eight silver miners.

Penasquito is not only a water hog, but it also consumes a great deal of energy to produce its gold-silver and base metals. According to the data for 2017, the Penasquito Mine produced less than a fifth of Goldcorp's total gold production, but used 60% of the companies total energy consumption. And that ratio is likely worse for 2018 when they publish the data as Penasquito's gold production in 2018 represented only 12% of the company's total production.

So, it's no surprise that the Penasquito Mine has been plagued with protests and blockades for years. It will be interesting to see how the future unfolds for Penasquito with the new anti-mining President AMLO now running the show. Either way, these type of super large open-pit mines will soon be extinct when global oil production peaks and declines.

Follow Money Metals Exchange and get email alerts
+
Add a comment
Disagree with this article? Submit your own.
To report a factual error in this article, click here.
Your feedback matters to us!