Investors eyeing Albania’s economic growth prospects in the week ahead are set to receive updates on the Balkan country’s consumer prices, as well as its central bank rate decision.

Albania’s government has been helping to fuel improved conditions in the nation through a host of new infrastructure projects. These structural reforms have been aimed mainly at increasing productivity and competitiveness in the country, as well as creating employment and improving governance. 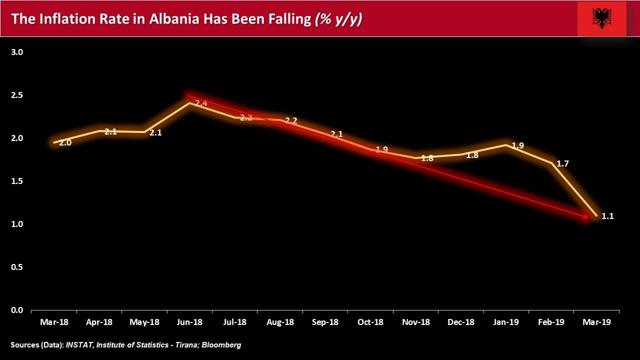 The reforms seem to have helped the economy make some headway.

The pace of Albania’s gross domestic product (GDP) growth accelerated to 4.2% in 2018 from 3.8% in the prior year, underscored by job creation in industry and services, as well as a 1.5% drop in unemployment to 12.3%. Household spending and investment were also mainly responsible for the improved economic conditions.

However, while the country’s economic landscape appears rosier, the World Bank expects growth to slow to 3.8% in 2019, then level off at an average of around 3.6% over the medium-term.

According to the World Bank, the government has embarked on increasing public-private partnerships (PPPS) at a torrid pace, and while these may be helping to ease short-term funding constraints, they also appear to be increasing contingent liabilities and may limit the fiscal space for new investments.

The World Bank added that “Albania needs to continue its fiscal consolidation and mitigate risks from off-balance activities.

“Improving the business climate and addressing the gaps in infrastructure and labor force skills are necessary to reap the early benefits of EU accession and make Albania attractive” for foreign direct investment (FDI).

Meanwhile, market participants will receive fresh consumer price figures Wednesday, along with an interest rate decision by the Bank of Albania.

The Bank of Albania has cut interest rates by 25 basis points a total of four times since November 2015, with the latest instance in June 2018, amid slowing interest rates. 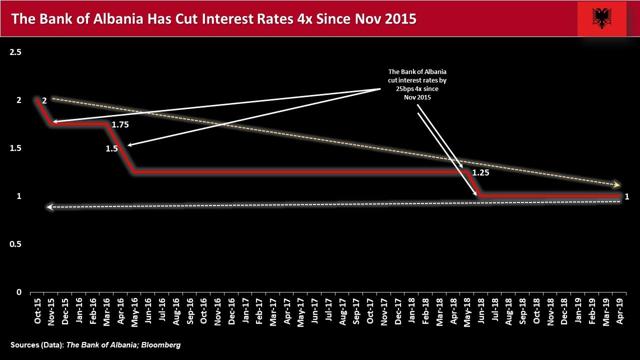 The central bank elected at its last monetary policy meeting in late March to maintain its base interest rate at 1.00%, and its overnight deposit and lending facilities at 0.10% and 1.90%, respectively.

The Bank of Albania’s dovish policy stance seems aligned with many other global central banks, including the European Central Bank and the Bank of Japan, amid expectations for a slower pace of world economic growth.

Indeed, Albania’s central bank’s monetary policy easing generally aims to bring inflation up to its target of 3%, while consumer prices averaged only about 2% at the end of 2018.

In terms of inflation, the country’s Consumer Price Index (CPI) fell 0.9 percentage points year-over year to 1.1% in March 2019 and was off 0.3% from the prior month.

INSTAT observed that the annual growth rate in March was influenced mostly by food and non-alcoholic beverage prices (+0.72 p.p.), followed by housing, water, electricity and other fuel (+0.21 p.p.). Compared to March 2018, costs rose the most for the food and non-alcoholic beverage group (+2.0%), followed by hotels, coffee-house and restaurants (+1.2%), then recreation and culture by (+1.1 %).

The largest price declines from February were highlighted by the food and non-alcoholic beverage group (-0.8 %), followed by clothing and footwear (-0.6 %), and housing, water, electricity and other fuel (-0.2 %).

The Albanian central bank also noted recent declines in global oil prices, as well as the cost of food on the domestic front, have contributed to the slowdown in inflation.

The bank said that inflation during 2018 was supported by improved economic activity, “fuller utilization of productive capacities, and better anchoring of inflation expectations.” However, the appreciation of the country’s exchange rate – estimated at around 0.2 p.p. – eased foreign inflationary pressures.

The Bank of Albania added that in line with “the relevant time lag of the pass-through on prices, the effect of the exchange rate is expected to peak during 2019 and wear off afterwards.”

Investors will likely be watching the unfolding of Albania’s structural reforms, as well as further developments on its rate of inflation, FDI, currency and monetary policy for a gauge of the country’s overall economic health and financial well-being.

Note: This material was originally published on IBKR Traders' Insight on May 2, 2019.