Uber Technologies, Inc. (NYSE:UBER) is being projected for a May 10 IPO after it successfully filed its amended S-1 form. Uber's IPO looks to be the biggest IPO of 2019 even after the negative sentiment that has surfaced around the industry after its main North American competitor Lyft, Inc. (LYFT) finished its recent IPO with some less than stellar results.

However, companies like Uber that are actively changing societal behavior and views on a global scale can be few and far between. This might be an opportune chance for investors to buy into the stock on the ground floor at a more conservative valuation than many would have believed at the beginning of 2019. Potential investors should have a plan of action set up for Uber's IPO as volatility in the short run could be the name of the game for the company as it was for its predecessor Lyft.

Uber has narrowed its planned IPO range to about $44 - $50 a share which would result in a market cap around ~$84B at the top range based on ~1.677 billion shares outstanding after it sells an additional 180 million shares in its IPO. Its fully diluted market cap would sit around ~$92B at that level as it hopes to raise about $9B in funding for its future growth. Here is a glimpse of some of the growth that prospective investors will be betting on going forward as Uber eclipsed 10 billion trips provided by the end of 2018 while its main North American competitor Lyft eclipsed 1 billion trips also in September of 2018. 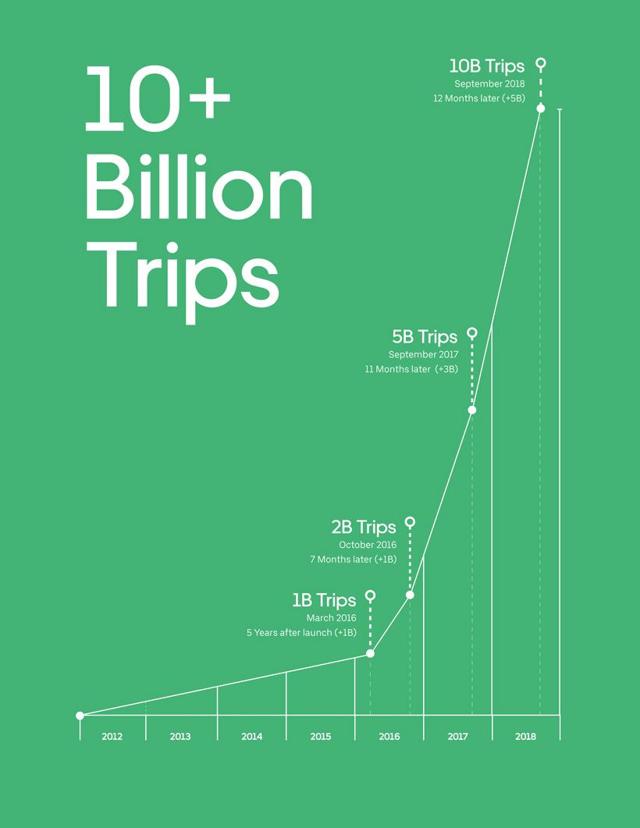 What investors are getting with Uber is not only a dominant North American player, but a global presence poised to dominate many of the markets of the world with minority-owned affiliates in other key areas.

All of this growth and industry disruption though has created a high price tag for entrance into the Uber growth story as the company was potentially looking for a $100B-$120B valuation right before Lyft was able to complete its IPO. However, all of that over-enthusiasm has quieted after Lyft's IPO met with unexpected selling pressure that has allowed the company's share price to remain under its $72 IPO price weeks after it finished going public.

This shift in sentiment means that investors have the chance to possibly get into Uber's IPO at a potential 30% discount ($120B down to $84B valuation) that Uber might have IPO'd at if Lyft's entrance into public markets would have been met with more enthusiasm. I bought into Lyft's story after its post IPO crash with a purchase of around 15% below its IPO price with plans to buy into Uber's story as well if sentiment for it faltered in any way on its IPO as well. With a 30% possible discount to what the IPO could have been priced at not too long ago, I will be looking to purchase shares of Uber right out of the gate as I believe in company's growth and diversity strategy. I am not overly worried at this time about official profits for the company or slowing growth over the coming years as other potential investors might be as I think that its global operations and prospects eclipse these concerns, especially with autonomous vehicles potentially right around the corner.

Uber's disruption in the ridesharing category should be well-known by this time to most investors as the company's name has become a commonly used verb or noun across the globe. Taking an Uber is far more hip in today's society than taking a taxi as antiquated taxis are now looked at with disfavor by many customers as expensive legacy options that appear to be going the way of the dinosaur. Besides getting a leader in the global ridesharing market, Uber offers investors exposure to additional business lines such as Uber Eats and Uber Freight with corresponding synergies.

Uber Eats allows customers to order local food service with reliable and quick delivery at the touch of a button. Uber created its meal delivery app ~3 years ago and is one of the biggest meal delivery platforms in the world as it works to develop scale to ultimately deliver meals faster and more reliably than its competition. Synergies could include ultimately increasing the number of Uber drivers in key markets along with potential service overlap as it leverages its network of over 220,000 restaurants in 500 cities with its ridesharing dominance.

Uber Freight could be a significant player in revolutionizing the trucking and logistics industry by efficiently connecting shippers and carriers with customers. Optimizing trucking loads and reducing the number of empty trucks in service could not only save companies significant money over time, it also could be highly beneficial to the environment. Uber Freight has been online since May of 2017 and has contracted with over 36,000 carriers connected with over 400,000 drivers to serve over 1000 shippers including large companies like Anheuser-Busch InBev SA/NV (BUD). It also has formed key partnerships recently including joining SAP SE's (SAP) Logistics Business Network for optimizing load management and execution.

Here is a breakdown on how I plan to play Uber's upcoming IPO based on prices for shares when it opens on the public market or throughout the coming days/weeks.

I plan on initiating a regular position in my portfolio if Uber's stock price opens around the expected $50 a share range. I think the discount built in from Lyft's troubles make Uber a decent buy around this potential IPO price where I previously needed a discount to Lyft's IPO price before I bought into its story. I maintain around 35-50 individual stocks in my portfolio along with mutual and index funds which means a regular position for me is usually like an ~1.5% part of my portfolio, with half a position like 0.75%, and an oversized position around 3% of my overall portfolio. If Uber opens at around a $100 billion valuation, or around $60 a share, I will look to add a smaller half position of the stock to my portfolio with a leaning towards taking no position in Uber if it starts out around $70 a share or more. If Uber trades over the coming days like Lyft did with a downward trend leading it to around $40 a share, I would then look to increase my current position into an oversized position. I find having a plan going into IPO situations works well for me as valuations can fluctuate wildly and a plan helps me keep control of the situation by not overreacting to wild variations or media reporting.

Negative sentiment continues to hover around Uber's upcoming IPO as institutions are still expected to buy into the stock at what currently appears to be around an $84B valuation. I hope to capitalize on the current negative sentiment of many investors, after the Lyft debacle, to initiate a position in Uber as I think the long-term story of Uber could have tremendous future success as a duopoly in many ridesharing markets along with its positions in other emerging businesses like Uber Eats and Freight. Autonomous driving could be the eventual catalyst companies like Uber need to capitalize on their profitability and autonomous driving might be here sooner than many investors expect. I continue to be long Lyft and hope to be long Uber by the end of the coming week. Best of luck.

Trent Welsh
6.42K Followers
B.S. Psychology University of Missouri-Columbia MBA University of Missouri-Columbia Full time investor looking to capitalize on market overreactions and looking for value where others see nothing but wreckage. Long term buys and short term trades to build wealth.Investing Better Than A Money Manager: The Rise Of Retail Investing - By Trent WelshI have an investing book with the title above on Amazon written for beginning retail investors looking to set up a self-directed portfolio with their IRA's, 401k's, or other retirement or trading accounts. It details how to pick and choose stocks amidst the different sectors and how to figure out how much in each sector an investor should have to help achieve diversification.Please take a look at it and let me know your thoughts. Thanks and Best of luck to all :).
Follow

Disclosure: I am/we are long LYFT. I wrote this article myself, and it expresses my own opinions. I am not receiving compensation for it (other than from Seeking Alpha). I have no business relationship with any company whose stock is mentioned in this article.