2019 is on track to be a big year for Silicon Valley decacorns (private tech companies valued at more than $10 billion) going public.

Over the last few weeks, Lyft (LYFT), Pinterest (PINS), and Zoom (ZM) have all been rising in double digits on their first day of trading. Uber (UBER) and Slack (SK) look poised to be oversubscribed when their turn comes. WeWork (VWORK), Palantir (PALAN), and Airbnb (AIRB) will soon be joining the bandwagon.

Let's face it. Some of these companies have compelling stories. And while I won't go into the details of which ones are on my watch list today, it's clear that some of them could be a worthy addition to your portfolio.

Now, the days of the dotcom mania have been a lesson for many investors who thought they had found a sure way to hit the jackpot. Warren Buffett and many other gurus said many times that regular investors shouldn't attempt to buy hot offerings in a hot market.

What to do, then? Several of my subscribers have asked me how to approach hot IPOs. I have succumbed to some of them in the past, enjoyed some successes and tried to learn from my mistakes.

As I was trying to define a rule-based, down-to-earth approach to IPOs for my own portfolio strategy moving forward, I looked through the history of IPOs in general and more specifically, in tech. What resulted from my research are the five tips below that are meant to protect an investor from pitfalls that can be detrimental to a portfolio performance. 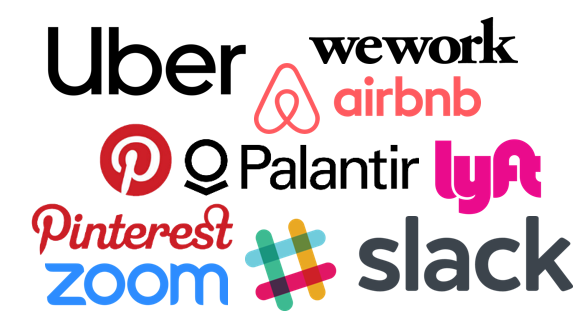 Understanding the risks you are taking can educate your decision and make you think twice before pulling the trigger. Eventually, you need to know how strong the cards you are playing with really are. That's the only way you can stack the deck in your favor.

For average investors who buy their shares in the secondary market, investing in unicorns is like buying lottery tickets - the opening price is usually far above the IPO price and most of the gains remain with the lucky few who get allocated shares in the IPO.

To put IPOs in context, I looked back at 30+ years of data gathered by Professor Jay Ritter from University of Florida.

Here are the main takeaways:

IPOs are historically a risky bet 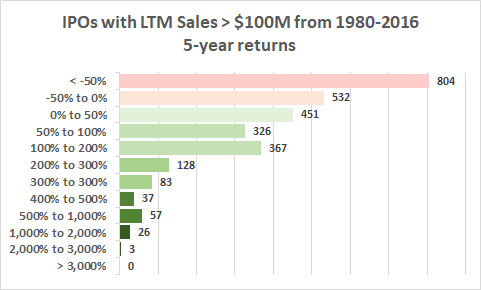 Looking back at 36 years of data for IPOs with $100+ million in sales: 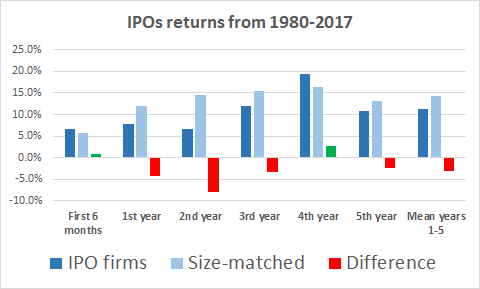 When compared to companies of similar size, IPOs underperform particularly from six to 24 months after the IPO date. This could be explained by the selling pressure following the end of the lock-up period. As the novelty of a hot IPO wanes, expectations come back to earth and so does the stock price.

The smaller, the riskier 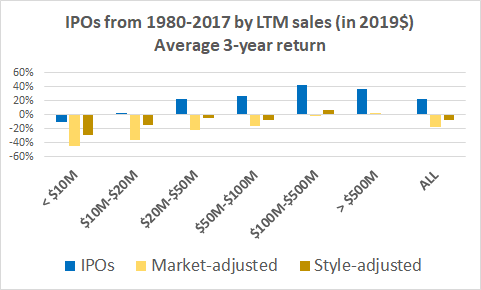 If we isolate the performance of IPOs based on last 12 months sales, two fundamental conclusions become readily apparent: 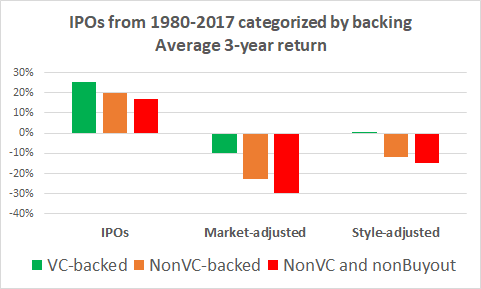 It's clear that companies that are already backed by VC money are performing better than those that aren't. But here again, let's not forget that they still under-perform if you look at them on a market-adjusted basis.

This is probably the easiest trick in the book to stack the deck in your favor.

It's easy to remember this rule and it's very useful in practice:

Only once you can answer all of these questions should you really consider jumping in. Anything earlier than this could be considered premature since an S-1 filing with the SEC can only give you a glimpse at the performance of a company during the months leading to its IPO.

By waiting until after the second earnings call, you will benefit from two main leverages:

I decided to invest right away in Eventbrite because the valuation appeared reasonable, and I had strong confidence in the management and the VCs backing the company (Sequoia Capital and Tiger Global).

As you can see, the shares skyrocketed on their first day, gaining 60% from their $23 IPO price and reaching $36. Waiting for the second earnings call (March 2019) before starting a position in Eventbrite would have led to a much better cost-basis in the low $20s.

Now, thankfully, this mistake had barely any impact on my portfolio performance. Why? Because I applied tip #3 below.

3) Only nibble at it during the first year

Given the high volatility expected during the first few months, it would be a mistake to build your position all at once. Only by staging your buys over several months will you be able to build a satisfying cost-basis.

Consider recent Chinese tech IPOs like iQiyi (IQ) and Huya (HUYA), two companies that have traded in tandem over their first year as public companies.

I have built positions in them slowly over time, in a way that enabled me to accumulate shares when they were close to new lows. Despite both companies being more than 50% down from their June high, both positions are in the green in my portfolio. I don't think many shareholders can say the same.

Another great example is to look at outstanding performers like Match Group (MTCH) and Square (SQ), both huge winners in the App Economy Portfolio.

Both Match Group and Square went public in November 2015.

They had been public for more than a year and a half before they started to outperform. Their share price performance is really eye-opening because it illustrates why you don't need to jump in. Even if you think you have found an absolute winner, there's usually plenty of time to build a position. You won't miss the boat.

Waiting for a dip during the second year after a company IPO'd is likely to give you a lower cost-basis and a larger margin of safety. So, if you really want to start a position, consider keeping it a very small allocation of your portfolio so that you can improve your cost-basis should the opportunity arise.

Looking back at some of the recent high-profile 2018 tech IPOs, it's easy to see that the first few months were bumpy once we were beyond the first day spike. Elastic (ESTC) and UpWork (UPWK) have been strong performers, but many other high profile companies such as Spotify (SPOT), Dropbox (DBX), DocuSign (DOCU), and Survey Monkey (SVMK) have been lagging the S&P 500.

If the example of Match Group and Square above wasn't enough, I want to re-emphasize here that only those who hold their positions over several years will be truly rewarded.

Sure, you can take advantage of volatility to make a quick buck. But the true alpha that can define a portfolio's performance will only come to the most patient investors. 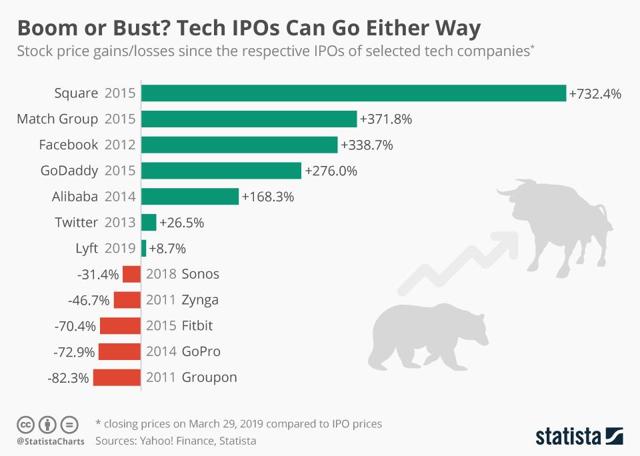 5) Don't let perfect be the enemy of good.

Anguishing over a few percentages of gains you missed here and there is not going to help you.

When we focus too much on making the perfect decision, two polar opposite things usually happen in our investor's emotional brain.

Let's look at it from a temperature perspective:

A tech IPO is intrinsically more likely to be volatile than other investments. Most of the 2019 tech decacorns are companies that are still growing very fast, with many unproven markets and unpredictable long-term performance. As a result, shares will be volatile for quite some time, making it hard to identify the right entry point.

Don't get too hot or too cold by letting daily fluctuations take over your emotions. To alleviate extreme volatility and your inner fear or greed, start your position slowly and focus on your overall portfolio allocation.

So, you have found a new tech IPO you really like? You are ready to pull the trigger and are anxiously waiting for the shares to trade publicly?

Then, you might have a good chance to improve dramatically your performance. And have more fun in the process.

If you are looking for a portfolio of actionable ideas like this one, please consider joining the App Economy Portfolio. Start your free trial today!

While keeping in mind some of the best recommendations from experienced gurus of Wall Street such as Warren Buffett, Peter Lynch, Burton Malkiel or Philip Fisher, I am trying to beat the S&P 500 index by a significant margin.

Here are some of the mega-trends reflected in the portfolio:

App Economy Insights
29.88K Followers
Author of App Economy Portfolio
Unlock a portfolio built to benefit from the rise of the app economy
My name is Bertrand Seguin. I'm a former PwC consultant and veteran financial executive in the video game industry. I've spent 12 years at Bandai Namco Entertainment, leading the Financial Planning and Analysis team in the transition to Digital, Mobile, and Game-as-a-Service. I hold a Master of Science in Management and Finance.

My portfolio is built to disproportionately benefit from the rise of the app economy, the range of economic activity surrounding mobile applications. My investment plan and asset allocation are a result of secular trends I have identified (macro) and in which I take individual bets (micro). I invest with a very long time horizon (ideally 10+ years).

I am fortunate enough to have seen my strategy deliver outstanding results throughout the years.

Discipline and consistency win the game over time. Unfortunately, many investors violate their own model or strategy when their portfolio performance is temporarily disappointing. I would rather sell too late than too early, so I tend to never sell. I let my winners compound to a significant portion of my portfolio and let my losers become insignificant over time.

All App Economy Insights contributions to Seeking Alpha, or elsewhere on the web, are personal opinions only and do not constitute investment advice. All articles, blog posts, comments, emails, and chatroom contributions by App Economy Insights - even those including the word "recommendation" - should never be construed as official business recommendations or advice. In an effort to maintain full transparency, related positions will be disclosed at the end of each article to the maximum extent practicable. The premium service App Economy Portfolio is a research and opinion subscription. I am not registered as an investment adviser. The majority of trades are reported live, but this cannot be guaranteed due to technical constraints. Investors should always do their own due diligence and fact-check all research prior to making any investment decisions. Liability of all investment decisions reside with the individual investor.

Disclosure: I am/we are long MTCH, SQ, HUYA, IQ, EB. I wrote this article myself, and it expresses my own opinions. I am not receiving compensation for it (other than from Seeking Alpha). I have no business relationship with any company whose stock is mentioned in this article.