Editor's note: Seeking Alpha is proud to welcome Jacques Georget as a new contributor. It's easy to become a Seeking Alpha contributor and earn money for your best investment ideas. Active contributors also get free access to the SA PRO archive. Click here to find out more »

I expect Nokia to cut down on R&D

Nokia's (NYSE:NOK) stock has remained flat for years now as the company failed to report positive earnings, but “the times they are a-changin.”

As the innovation of 5G has now been made, R&D in 5G technology has now had its breakthrough for Nokia, i.e. 5G solutions from Nokia are currently both tested and market ready. Hence, it’s even likely that a major cut down on 5G related R&D will occur, leveraging its earnings outlook in the near future. 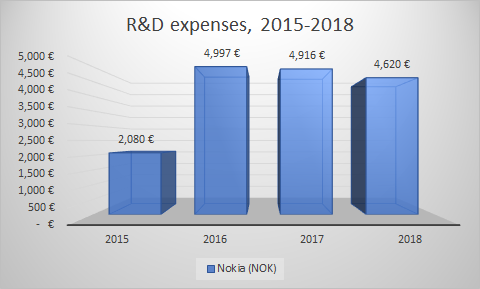 Compared to its peer, Ericsson (ERIC), Nokia spent a lot on research. R&D as a share of total revenues was at 21.0% for Nokia while it was 17.8% for Ericsson (FY 2018). Hence, lots of room exists to reduce R&D also when comparing to peers.

Nokia is now the only end-to-end 5G solutions provider with a global cover and has won big deals so far with major CSP clients. In 2018 only, Nokia signed a $3.9 (€3.5) billion deal with T-Mobile (TMUS) for the deployment of their 5G network in the United States. The same year, the company also signed a $2.2 (€2) billion deal with China Mobile (CHL). These deals indicate that Nokia’s end-to-end 5G solution is highly competitive, and the company currently has 100+ corporate customers engaged in the implementation of 5G and 400+ corporate customers within 4G.

Sales are picking up 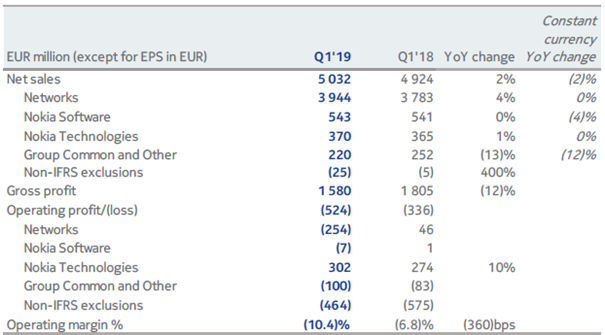 Nokia is incredibly dependent on their Networks division. The segment represents 78% of total revenues as of Q1 2019, with net sales of $4,425 (€3,944) million. On a constant currency basis, YoY growth was flat, but taking into account that Nokia had $224 (€200) million in sales outstanding at the end of the first quarter (expected to be realized before the end of 2019), sales actually grew by an impressive +5.3 percent compared to -3% in Q1 2018. Hence, YoY sales growth within the Networks segment actually accelerated by a stunning +8.3%.

As the only end-to-end 5G solutions provider with a global cover and already a market leader in the United States, China, Japan and South Korea, it’s very unlikely that the revenue of the company will decrease. On the contrary, a steady increase in revenue is logical and it's also what the CEO of Nokia predicts.

As of Q1 2019, 30% of Nokia’s revenues come from Europe and as the region turns to 5G, which is already on the map for most EU member states, Nokia will also have its share of revenue in Europe. The European Commission recently announced a 5G for Europe Action Plan with the purpose to have 5G accessible to all EU by the end of 2020.

At the same time, Nokia has successfully improved their cost efficiency on a yearly basis. This is apparent when inspecting Nokia’s financial statement. Loss before tax fell from $1,520 (€1,369) million in 2016 to $486 (€360) million in 2018, while at the same time revenues remained roughly the same and my calculations (based on data from Nokia's 2018 annual report) suggest that Nokia’s cost efficiency increased by 3% for the period. This excludes any effect from the latest $784 (€700) million cost savings program, which started in early 2019.

The total effect of (1) improved sales from 5G solutions, (2) increased gross margins, (3) a reduction in R&D expenses and (4) the full implementation of the cost savings program will have a positive impact on company earnings and Nokia will see its stock price spike.

In line with Nokia's own outlook metrics

Nokia’s own outlook is in line with my point of view. They see a sharp increase in revenues together with increased cost efficiency that will boost earnings already by year-end 2019 and even more so by year-end 2020. The company expects earnings per share for 2019 to land within the range of $0.28 to $0.32 (€0.25 to €0.29). First quarter earnings landed at negative $0.022 (€0.02) in earnings per share. But the first quarter tends to be weak for Nokia and the full year earnings forecast still stands. Furthermore, Nokia had $224 (€200) million in outstanding sales from 5G deliveries which they expect to be realized before the end of 2019.

The average P/E ratio for the telecommunication equipment industry is at 19.11. Hence, based on Nokia's own FY2019 earnings forecast, and compared to the industry average, Nokia's stock is undervalued with a potential correction of up to +20.72%. Including a 20% cut in R&D, a correction of +73.73% would be expected.

In the long run, the outlook is even more promising, as confirmed by Nokia, which expects both revenues and earnings to continue to rise in 2020.

The company continued to pay a high dividend even during years of negative earnings, which is also a signal to investors that Nokia is not and has not been in a situation of financial distress during the last years. Instead, well-targeted R&D investments in 5G was strategically initiated by Nokia which is now starting to reap what it sowed.

The expected dividend yield of Nokia is currently at 4.31% (NYSE) and 4.15% (OMX Helsinki). This is impressively high compared to the industry average of 2.5%. Furthermore, Nokia’s dividends record shows that the company’s payout policy is consistent across Europe and the United States. 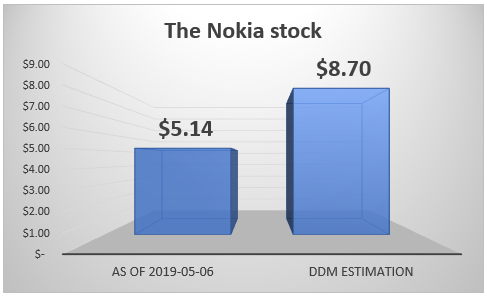 Due to heavy investments in R&D, Nokia has been struggling with negative earnings for several years. These investments are now starting to pay off and Nokia’s future success depends on their continued ability to lead as a 5G solutions provider to CSPs around the globe, as the world's transition to 5G continues. Nokia is the only end-to-end 5G solutions provider with a global cover and major deals have been made with key customers which supports the anticipation of continued success.

I view Nokia's stock as bullish in the intermediate time frame. With improved gross margins, a cost savings program in place, the possibility for management to cut down on R&D expenses and major deals landed in 5G, Nokia stands firm as competition intensifies.

Both P/E forecasts and the low price-to-book value reveals a large potential upside in the stock price. Finally, Nokia's stock has an impressive dividend payout and my DDM simulation suggests a Fair Value of $8.70 (€7.51), which I find plausible.

Please note that growth rates are calculated using Nokia’s functional currency, the euro. Due to changes in the EUR/USD exchange rate over time, it may differ to the USD equivalent growth rate.

If you liked this article, please scroll up and click Follow next to my name to receive future updates.

HedgeMix
789 Followers
Stock analysis brought to you by Jacques Georget. The analysis is based on a careful review of the growth prospects of each company. For valuation purposes, I often use theDiscounted Cash Flow (DCF) model, sharing valuable insight on cash flowgeneration under different business models.
Follow

118 Comments
To ensure this doesn’t happen in the future, please enable Javascript and cookies in your browser.
Is this happening to you frequently? Please report it on our feedback forum.
If you have an ad-blocker enabled you may be blocked from proceeding. Please disable your ad-blocker and refresh.