The Fed's quarterly Senior Loan Officer Survey on credit was just released yesterday. This is one of my long leading indicators and has a lot of information about tight vs. loose credit conditions, so let's take an updated look.

Consumer credit conditions have slightly tightened and demand has suffered

I need to start by explaining that the Fed has only recently started covering most consumer loans. But with that caveat firmly in mind, over the past few years, with the exception of mortgage loans, banks have gradually been tightening consumer credit - and demand has slowly waned.

Despite that, in that past two years, consumer demand has lessened:

But this may reflect consumers turning to non-bank lenders for mortgages.

When it comes to auto loans, banks have tightened credit, and consumer demand has simultaneously fallen:

This has been cited as one reason why motor vehicle sales had their two slowest quarters in the past five years in the first quarter of this year.

Although a slight majority of banks indicate increased willingness to make consumer loans:

They have also tightened standard for consumer loans:

And demand for those loans has also lessened:

This suggests that consumers may be under a little stress. Although the New York Fed has not yet released its consumer loan delinquency report for Q1, their latest NY Fed report for Q4 of last year did show a slight uptick in delinquencies: 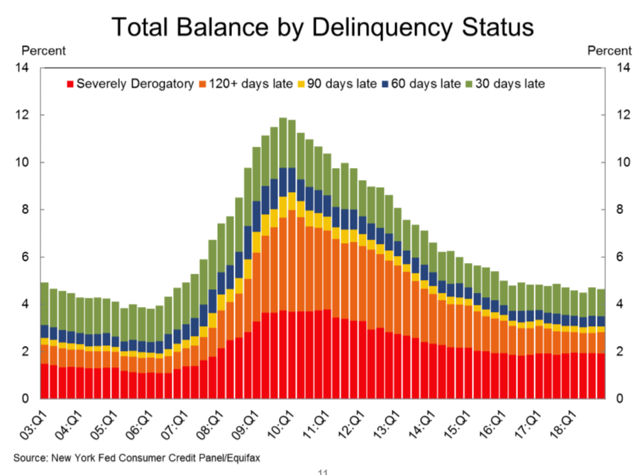 Delinquencies bottomed in Q1 2006 during the last expansion, a year or more after credit was tightened and demand decreased.

For firms, credit is still easy or at least neutral

Note that a negative number, showing loosening, is a positive for the economy:

This has been a long leading indicator, typically turning at least one year before the economy as a whole.

Further, banks have not increased spreads for smaller vs. larger firms:

As these have been long leading indicators since their inception, the mismatch of supply and demand gives opposite interpretations.

For comparison purposes, here is credit provision for larger firms (blue below, as in the first graph above) vs. the weekly Chicago Fed National Financial Conditions Index (red):

You can see that the much more timely weekly measure has been a good proxy for credit conditions for firms.

Finally, over the past 30 years, the provision of credit to firms has had a tendency to correlate with or slightly lead corporate profits (both measured YoY in the graph below, credit provision inverted):

While the correlation certainly isn't perfect, usually, YoY corporate profits either improve or decelerate or decline one or two quarters after a similar turn in credit provision. This suggests that corporate profits are likely to decelerate significantly not just in Q1, but on a YoY basis for the next several quarters as well.