Last month, I detailed how auto retailer Carvana (NYSE:CVNA) was quickly becoming a short seller's dream. Between massive losses, huge cash burn, and increasing dilution, investors looking at this name should be very skeptical. After the company's Q1 earnings report on Wednesday, the story only seemed to get worse with the stock at new highs.

For the period, the company announced revenues of $755 million. Not only did this represent growth of 110% over the prior year period, but it smashed analyst estimates by nearly $40 million. Unfortunately, that growth came with much larger than expected expenses, as the company on a non-GAAP basis missed estimates by a nickel, reporting an adjusted loss of $0.53 per share.

When we look at the income statement on a GAAP basis, the numbers are even more staggering. Despite that huge revenue jump, the net loss also soared from $52.7 million to $82.6 million. After subtracting out those losses attributable to non-controlling interests, the net loss attributable to Carvana nearly tripled from $9.8 million to $28.5 million. On a per share basis, the loss doesn't appear to be that much greater, but that's because the diluted share count used for calculating losses per share more than doubled over the prior year period! That's the only good thing about dilution.

As I detailed in my previous article, investors are facing a substantial amount of dilution. Between stock-based compensation and the conversion of Class B shares, the number of Class A shares (the ones trading in the market) have skyrocketed as seen in the chart below. In the three months between major filings, the Class A count jumped by another 7% plus, and there are still over 101 million Class B shares outstanding that could be converted. 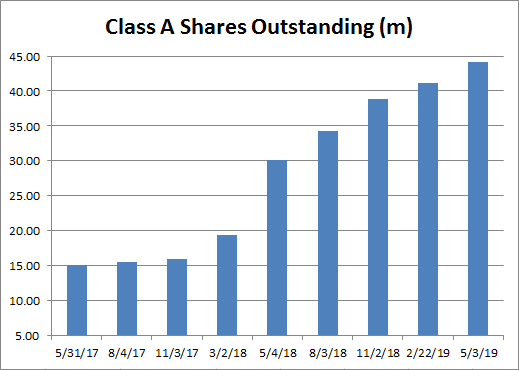 The biggest problem however is that the company just continues to burn cash faster than a drunken sailor. Remember, last year saw $414 million burned in operations alone, and that was before another $150 million was spent on capex and acquisitions. In Q1 2019, the company reported that it burned through another $214.5 million in cash due to operations, up from $131.4 million a year ago. Capital expenditures also soared more than $15 million to $43.2 million, further weakening the balance sheet.

At the end of Q1, the company was left in a terrible financial place. The unrestricted cash balance was just $85 million, not even enough to cover the company's "other long-term debt" of $136 million. That's before I bring up the $343 million in unsecured notes outstanding, the $15 million current portion of long-term debt, or the $435 million from its floor plan facility borrowings. With debt soaring, interest expenses in Q1 were more than $15.6 million, up from $3.5 million in the prior year period.

I don't see how the company will make its long-term financial goals if it continues to borrow and pay more and more and interest. Perhaps that means an equity raise will be needed at some point, but the company is already seeing a massive amount of dilution. Now might be a good time to sell some shares since they are up $15 from my prior article, meaning the name is trading at an even crazier valuation to peers than before. For a stock that was under $30 on February 12th, selling at $74 (seen in after-hours following the earnings report) now certainly wouldn't be as costly, and it would shore up the balance sheet a bit.

In the end, Carvana's Q1 report highlights just how bad the financial situation is at this company. Despite revenues more than doubling over the prior year period, the net loss nearly tripled, and the company burned through more than a quarter of a billion dollars in cash. Despite tremendous dilution to the trading class from early investors and insiders, an equity raise might be needed since debt levels are already high. With this stock trading at an all-time high currently, the name appears even more overvalued than ever before.