Since 2012, CAISO has used “The Duck Curve” to graphically illustrate the impact of renewables on available power supplies. This 2016 version summarized historical and expected trends from 2012 through 2020 for a typical spring day. 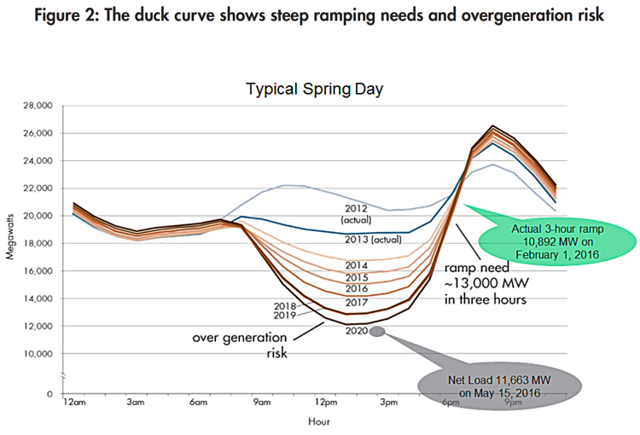 The renewables deployment forecast embodied in the 2016 version of The Duck Curve has been quite prescient, as demonstrated by the following graph that summarizes average hourly power production by resource type for the month of April 2019. While the hour-to-hour changes in CAISO’s Duck Curve are steeper than the changes in my graph, the former uses a modified vertical scale and focuses on the impact of solar power while the latter uses a complete vertical scale and includes all important resource classes. 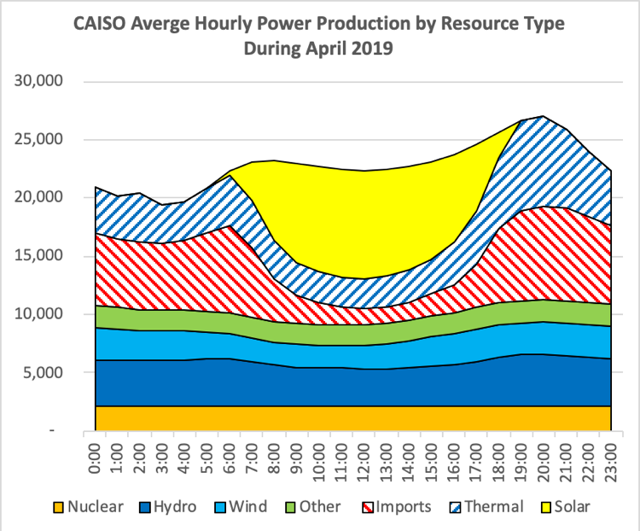 This year, solar curtailments have been a daily occurrence, and through May 9, 2019, cumulative curtailments of 446,500 MWh were 189% of 2018 levels. There also were 25 days when CAISO, like Germany, was a net power exporter for at least one hour, compared with zero days in 2018

In 2017, the Los Angeles Times ran a feature story that examined the cost of exporting solar power from California to utilities in neighboring states. It reported that on eight days in January, nine days in February and 14 days in March, California paid Arizona utilities to take excess solar power, and explained that the transactions saved Arizona ratepayers millions of dollars. While the exports were fiscally significant, they weren’t substantial enough to make California a net exporter of electricity for any hourly reporting period in 2017.

The following graph stacks curtailment data from CAISO’s Managing Oversupply webpage with export data derived from CAISO’s daily renewables and emissions reports and shows how the curtailment and export landscape in California has changed over the last 2-1/2 years. 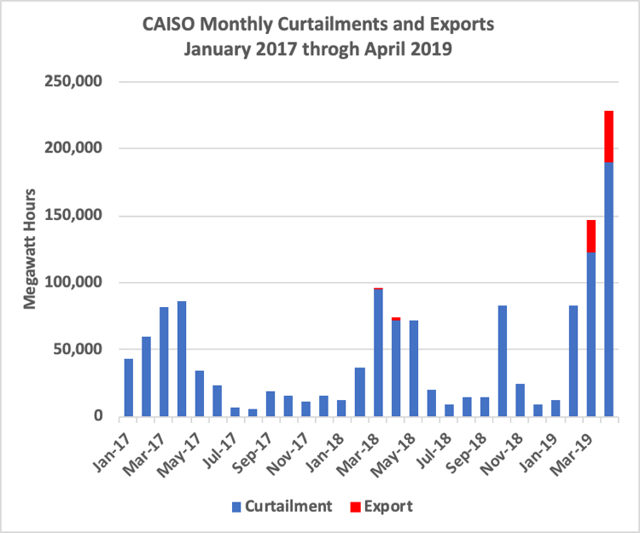 Since we’ve reached a point in the annual weather cycle where afternoon power demand is climbing rapidly, I’ll be surprised if CAISO reports more export days before the fall. However, several conclusions seem inescapable given recent developments.

Since California’s solar power generating capacity has reached a tipping point where the mid-day solar power glut is obvious, I expect to see significant changes in CAISO’s approach to future solar power projects. At the utility-scale level, I think new projects will be strongly encouraged if not compelled, to incorporate energy storage for time shift. Since time shift is not a high-value energy storage application, I expect storage issues to complicate project feasibility analysis, financing, and engineering, procurement and construction.

On balance I expect the rapidly evolving solar power glut in California to negatively impact companies like First Solar (FSLR), SunPower (SPWR), Canadian Solar (CSIQ) and JA Solar (JASO) that have booked a disproportionate share of their historic revenue from equipment sales in California.

Disclosure: I am/we are short TSLA THROUGH LONG-DATED OUT-OF-THE-MONEY PUT OPTIONS. I wrote this article myself, and it expresses my own opinions. I am not receiving compensation for it (other than from Seeking Alpha). I have no business relationship with any company whose stock is mentioned in this article.

709 Comments
To ensure this doesn’t happen in the future, please enable Javascript and cookies in your browser.
Is this happening to you frequently? Please report it on our feedback forum.
If you have an ad-blocker enabled you may be blocked from proceeding. Please disable your ad-blocker and refresh.