The major US equity indexes delivered their worst week of 2019 after a new curveball was thrown into trade discussions between China and the United States with the implementation of new 25% tariffs on $200 billion of Chinese goods. REITs (VNQ and IYR) were among the best-performing equity sectors on the week, ending the week lower by roughly 1%, just the third down-week in the past eighteen weeks. Helping to boost the yield-sensitive sectors of the equity market, cooler-than-expected inflation data pulled down the 10-year yield to the lowest level since early April as economic data continues to indicate ‘Goldilocks’ economic conditions of low inflation and solid growth persist. As it did last year, however, trade disputes and rising energy prices once again threaten to upset this delicate balance. 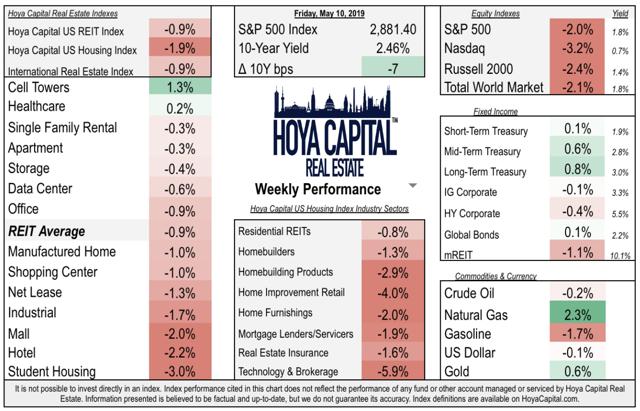 On the week, the Hoya Capital US Housing Index, an index that tracks the performance of the broader US residential housing industry, dipped 1.9% after closing at new 2019 highs last week. The domestic-focused Residential REITs (REZ) and Homebuilders (XHB and ITB) were the relative outperformers, but trade tensions weighed on the three sectors more reliant on imported goods: Homebuilding Products, Home Improvement Retail, and Home Furnishings. Zillow (Z) surged more than 6% on the week after reporting earnings, but it wasn’t enough to offset weak performance across the rest of the Real Estate Technology and Brokerage sector from Redfin (RDFN), RE/MAX (RMAX), RealPage (RP), and Realogy (RLGY). Overstock (OSTK), Lennox (LII), Welltower (WELL), and New Residential (NRZ) each climbed by more than 1%.

Earnings season wrapped up this week in the REIT and housing sectors, highlighted this week by strong results in the single-family rental sector with reports from Invitation Homes (INVH) and Front Yard Residential (RESI). Results generally topped estimates across the REIT sector with roughly 60% of companies beating projections and a third raising full-year 2019 guidance. As discussed in our REIT Outlook, the REIT rejuvenation appears to be on solid footing from a fundamental perspective, as long as interest rates cooperate. On a fundamental level, REITs should deliver a fairly strong year of reacceleration across many property sectors, particularly the residential and office sectors, which continue to be powered by strong job growth and modest supply growth. 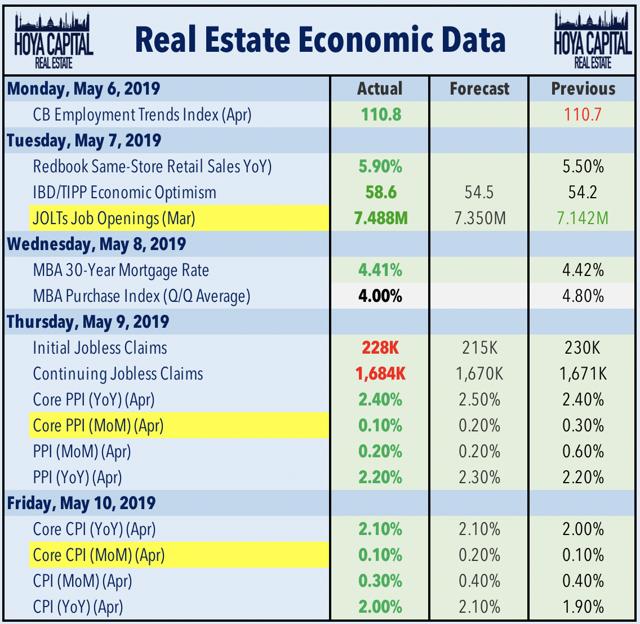 Inflation was - and remains - the key threat to potentially ending the nearly decade-long economic recovery. Rising oil prices, along with rising costs from tariffs and trade disputes, had put upward pressure on inflation throughout 2018, pushing both the 10-year yield and 30-year mortgage rates to post-recession highs. The plunge in oil prices in late 2018, along with moderating global growth, has quelled much or all of that inflationary pressure. All three inflation indexes - Core CPI, PPI, and PCE - were cooler-than-expected in April. 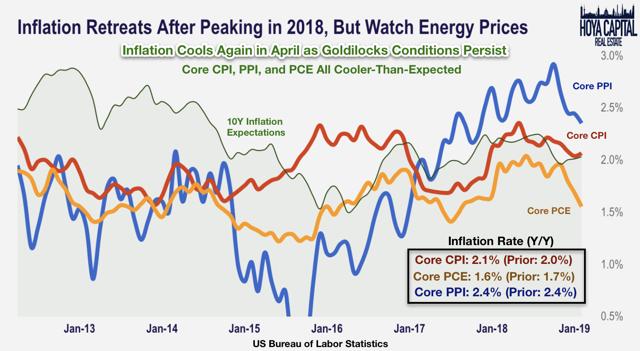 Housing (CPI:Shelter) accounts for more than a third of the total CPI weight (42% including housing-related services), and since 2013, housing inflation has been significantly above the overall inflation rate. From 2015 through late 2016, housing inflation was one of the only components keeping Core CPI out of deflationary territory. Housing inflation has reaccelerated over the last several months after moderating slightly in 2018. At 3.8%, Primary Rents are rising at the fastest rate since mid-2017, consistent with recent private-market rent growth data. 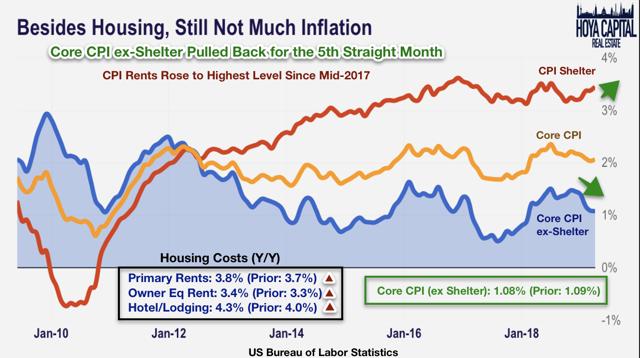 The importance of housing costs on the overall price index cannot be overstated. Since 1995, shelter inflation has outpaced the broader rate of inflation by more than 1% per year, fueled by a persistent supply shortage in the US housing markets. Over the last three decades, structural impediments to supply growth, aggravated by the dramatic dislocations during the housing crisis, have dramatically slowed the rate of housing starts per capita. On a rolling 10-year average, residential fixed investment as a share of GDP is the lowest since the end of WW2. The implications of this housing shortage, we believe, will be a continued persistence of "real" housing cost inflation and a long runway for growth in residential housing construction in order to equalize the supply/demand imbalance. 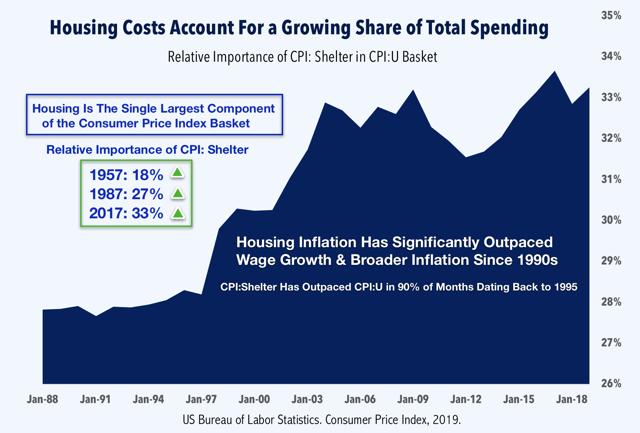 As we discussed last week, amid this housing shortage, demand for housing has accelerated over the past three years driven by robust job growth and rising real wage growth. 2018 was the strongest year for household formations (both renting and owning) since 1985 at nearly 2%. Below-trend household formation growth in the post-recession period suggests that there may be a substantial slack of "deferred" households - notably from multi-generational and "roommate-by-necessity" households - that could be unlocked over the next several years. Demographics remain extremely favorable into the 2020s for household formations, particularly in the single-family category, as the largest 4-year mini-generation in the United States is currently aged between 26 and 30. 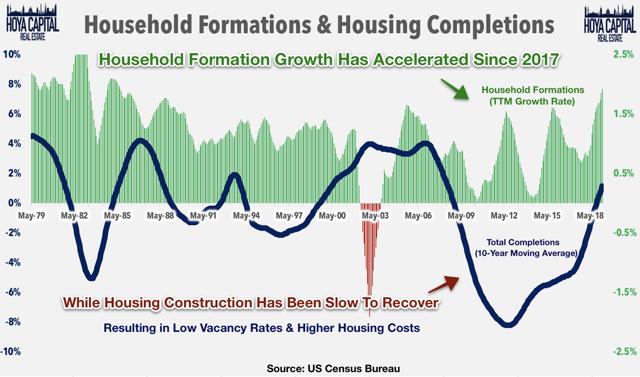 Labor Markets Continue To Be Relentless

Evidence of broad-based strength in the labor markets continues to show across nearly all metrics as job growth remains relentless. JOLTs (Job Openings and Labor Turnover) data released this week was better-than-expected with total job openings rising by the most in more than a year. Hires are higher by 4.7% over the last year, as the number of job openings continues to outnumber the total amount of unemployed Americans in the labor force by more than a million. The spread between the rate of job openings growth and hires has widened since early 2018, however, a sign that labor shortages may be developing 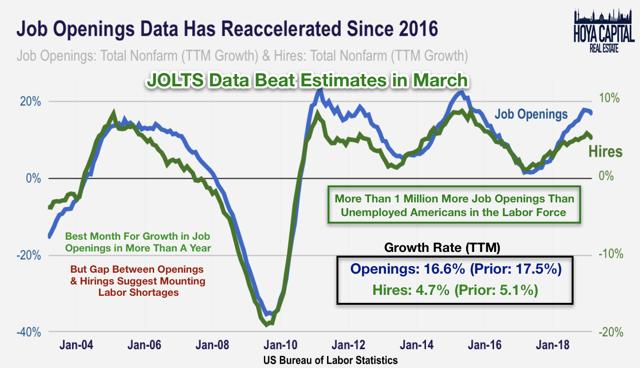 The rate of voluntary quits continues to rise, matching the highest level of this economic expansion, a sign of increased labor market dynamism and an indication that workers are feeling more confident about their financial situation. The lack of labor market dynamism in the post-recession period has been blamed for weak productivity growth and there is hope that the uptick in the quit rate may foreshadow future productivity gains as workers pursue jobs that better maximize their skills. 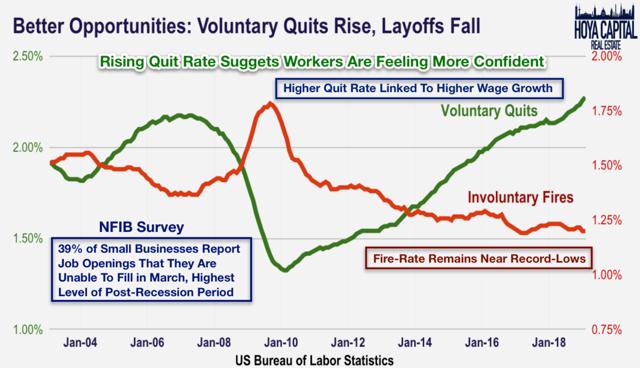 So far in 2019, REITs have climbed by more than 16% while Homebuilders have surged more than 27%, each coming off their worst year since 2008. The S&P 500, meanwhile, has climbed roughly 15% on the year while the small-cap Russell 2000 has jumped 17%. At 2.46%, the 10-year yield has retreated by 23 basis points since the start of the year and is roughly 80 basis points below peak levels of 2018 around 3.25%. Energy prices, including crude oil and gasoline, have recovered strongly this year after a sharp decline in late 2018. 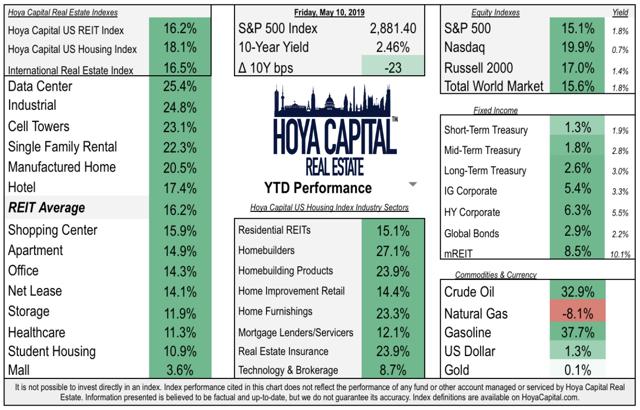 This week, we published Single-Family Rentals: REITs Flex Their Muscle. Single-family renting is a tough, capital-intensive, and low-yield business. Through market-level scale and operating efficiency, however, single-family rental REITs have cracked the code to profitably manage rental homes. The institutionalization of the single-family housing market is a trend in the early innings. The home buying, selling, and renting business is being fundamentally disrupted by technology and Big Data. A growing share of new single family housing starts are being built specifically for renting. 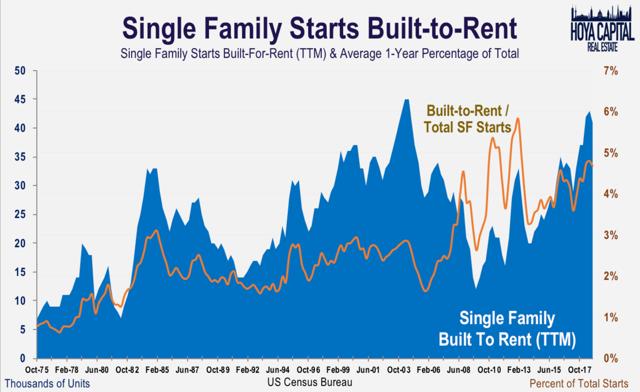 We also published Student Housing: American Campus Communities Is Playing The Long Game. After battling through a series of operational missteps and oversupply issues over the past two years, American Campus (ACC) appears to have found its mojo once again. Disciplined capital allocation, along with the broader REIT Rejuvenation of 2019, has erased the NAV discount that had stifled the company’s external growth ambitions. FFO growth is projected to reaccelerate.

The ongoing trade spat between the US and China sent the S&P 500 and Nasdaq lower by more than 2%, the worst week of 2019 for the major averages. Domestic-focused real estate equities generally outperformed on the week, lifted by inflation data that suggested that ‘Goldilocks’ economic conditions persist. Trade disputes, however, threaten to upset this delicate balance.

CPI data came in cooler-than-expected. Besides housing costs, inflationary pressures remain muted. At 3.8%, rent rose at the fastest rate since mid-2017, powered by tight supply and strong household formations. Strong earnings results from Zillow and Invitation Homes were highlights of the final week of peak earnings season across the REIT and housing sectors. Results were generally better-than-expected. Labor markets remain relentless. JOLTs data showed that job openings rebounded better-than-expected in March, the biggest gain in a year. There are 1.3 million more openings than unemployed Americans.

After a relatively quiet week for housing and real estate-related data, we’ll get to see Homebuilder Sentiment Data and Retail Sales next Wednesday and Building Starts and Permits data on Thursday. As we’ve discussed, forward-looking data in the single-family housing markets continue to point to a recovery in building activity and new home sales for this year’s peak selling season. 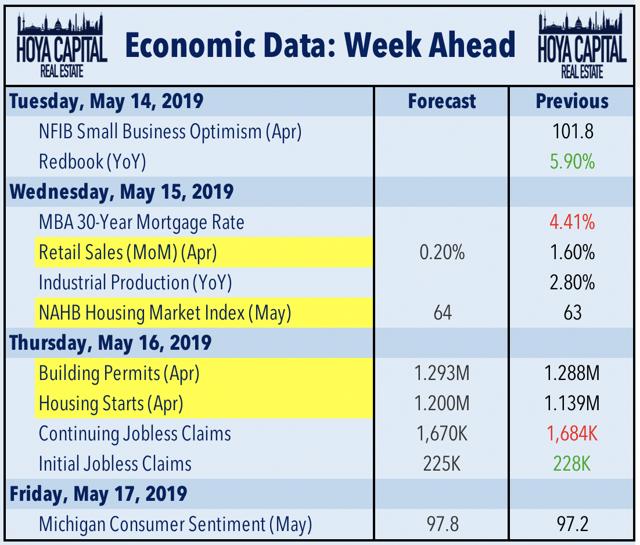 If you enjoyed this report, be sure to "Follow" our page to stay up-to-date on the latest developments in the housing and commercial real estate sectors. For an in-depth analysis of all real estate sectors, be sure to check out all of our quarterly reports: Student Housing, Single Family Rentals, Manufactured Housing, Cell Towers, Healthcare, Industrial, Data Center, Malls, Net Lease, Apartments, Shopping Centers, Hotels, Office, Storage, and Homebuilders.

Disclosure: I am/we are long OSTK, Z, LII, WELL, NRZ, CUBE, MAA, COST, SSD, NVR, RDFN, RMAX, RP, RLGY, INVH, ACC. I wrote this article myself, and it expresses my own opinions. I am not receiving compensation for it (other than from Seeking Alpha). I have no business relationship with any company whose stock is mentioned in this article.