That's what CNBC's David Faber told Larry Kudlow on April 26, after the advance read on Q1 GDP showed the US economy growing at a 3.2% clip in the first quarter.

That friendly reminder from Faber was necessary because in the course of celebrating the above-consensus GDP print, Kudlow went out of his way to insist that the Fed should still look at cutting rates despite the strong economy (the internals of the GDP report weren't great, but that's another story).

A week later, the April jobs report blew away estimates on the headline (263k) and the unemployment rate ticked lower to 3.6%, another 49-year low.

Average hourly earnings came in cooler than expected, prompting Kudlow to again call for rate cuts, this time in an interview with Fox Business, following the release of the jobs report.

Kudlow is hardly alone in playing the low inflation card in the course of nudging the Fed towards what's known in market circles as an "insurance cut". President Trump, Vice President Pence and Stephen Moore (who is no longer in the running for a seat on the Fed) have made the same argument, sometimes loudly. On Friday, for example, Trump tweeted about the latest read on CPI, which underscored the extent to which price pressures are not building despite the strong economy and the overheating labor market (and cut me some slack on the "overheating" characterization - you can always cherry pick a stat to "invalidate" blanket assessments like "overheating", but you know what I'm driving at).

The Fed itself has leaned on subdued inflation this year when justifying a "patient" approach to policy. That said, Jerome Powell's May press conference is now famous for the word "transitory", which is how the Fed chair described the factors weighing on inflation. That single word undercut expectations for Fed easing, even if market pricing still indicates traders believe the next move will be a cut, not a hike.

This all comes amid a broad, strategic rethink of the Fed's inflation framework. Speculation regarding the eventual adoption of a new approach (e.g., average inflation targeting, letting the labor market overheat even more, etc.) is running high and each passing data point which suggests price pressures remain muted only adds to the case for trying something "new".

Some of the above marks a contrast with 2018, when the Fed was arguably pigeonholed into hawkishness by US fiscal and trade policy. Piling fiscal stimulus atop a late-cycle dynamic at a time when the unemployment rate is sitting at the lowest in nearly five decades is tempting fate - if the Phillips curve is "sleeping", that amounts to poking at it with a sharp stick. Meanwhile, the tariffs threatened to push up consumer prices. Here's what BofA's Ethan Harris wrote last summer:

The objective of tariffs is to shift spending from imported to domestically produced products. However, it takes time to restructure long-established supply chains so the main initial impact of tariffs is a sharp increase in prices with little impact on domestic production. The supply response is doubly difficult when the economy is already at full employment. Indeed, given its dual mandate of full employment and moderate inflation, the Fed might have to hike faster in response to the tariffs to avoid even greater overheating.

As things stand, the prospect of a sharp spike in inflation seems remote. Indeed, the story of 2019 is the coordinated central bank pivot designed to "reflate" a global economy that appeared to be on the verge of a synchronized downturn.

That said, this week's escalation on the trade front materially increases the chances of tariff-related price pressures showing up in the US. The Trump administration's threat to move ahead with levies on the remainder of Chinese imports within one month if a deal isn't struck and the lingering threat of auto tariffs together present an even more vexing problem.

As Goldman writes in a note out Saturday, the existing tariffs have had a larger impact on consumer prices than the bank initially anticipated. Citing new academic research (see here and here), the bank flags two reasons why the impact on inflation has been (and could continue to be in subsequent rounds) material. To wit:

First, the costs of the tariffs have fallen entirely on US businesses and households. One might have expected that Chinese exporters of tariff-affected goods would have to lower their prices somewhat to compete in the US market, sharing in the cost of the tariffs. However, analysis at the extremely detailed item level in the two new studies shows no decline in the prices (exclusive of tariffs) of imported goods from China that faced tariffs. Second, the effects of tariffs have spilled over noticeably to prices charged by non-Chinese producers of tariffed goods, who appear to have opportunistically raised their prices in response to the protection from Chinese competition.

Not to put too fine a point on it, but neither of those two outcomes are terribly surprising. I think readers will agree with me on that.

Here's a set of charts from Goldman which show you the effect on consumer prices for categories affected by tariffs versus all other core goods (both for CPI and PCE):

Goldman goes on to update their estimate of the effect existing tariffs (i.e., what's been imposed over the course of the trade war) have had on US inflation. The bank's new assessment "suggests" a 0.19pp fillip to core PCE so far.

The effect of existing tariffs on inflation will fade, but thanks to Friday's escalation, any waning will be offset by renewed upward pressure stemming from the decision to more than double the rate on $200 billion in Chinese goods. If you assume the worst-case scenario wherein no deal is struck within a month and the US moves ahead with levies on all Chinese imports and decides to make good on the long-standing threat of tariffs on autos (predicated on the Section 232 probe), the impact on inflation is large. As Goldman writes, "if all proposed tariffs were implemented within a year, the total impact on core PCE would peak at around 0.9pp." 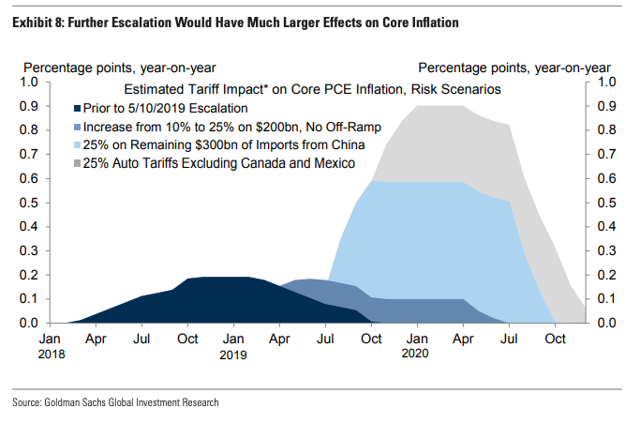 There are a couple of things to note here. First, this would alter the decision calculus for the Fed. A 0.9pp exogenous shock to core PCE clearly changes the game and depending on what else is going on (e.g., if the tight labor market ever manifests itself in rising wage pressures, if the Fed has adopted a more aggressive approach to boosting inflation by then, etc.), the FOMC might well be forced to hike rates to curb inflation, a tragically ironic outcome considering how much time everyone is currently spending debating the relative merits of a pro-cyclical rate cut designed to juice inflation even as the economy overheats.

Of course, in a scenario where the US is taxing all Chinese imports and slapping tariffs on autos, it's likely that the global economy will be in a veritable tailspin. Credit Suisse has argued that what we saw in Q4 in terms of both the selloff in risk assets and the weakness across PMIs was tied mostly to the "fear" of tariffs, not to any actual mechanical impact of protectionism. Here's an excerpt from an April note (more here):

Very poor equity market performance in Q4 and concurrent growth weakness signaled the costs of tariff fears. Political leaders saw that the short-term pain associated with expected tariffs might be reason enough to avoid escalation. The activity that might be lost over time upon the implementation of tariffs is a separate issue from the immediate negative impulse that comes from tariff fears. This was a momentum shock, not a structural slowdown in growth due to a scale back of trade. The distinction will remain important as further tariff controversies flare in the years (or months?) ahead.

Suffice to say that US tariffs on all Chinese imports and the imposition of auto tariffs would prompt an actual structural slowdown (not just a "momentum shock"). Assumed retaliatory measures from China and Europe, respectively, would make things worse. If Q4's "momentum shock" was enough to derail global equities, one can only imagine what an actual structural slowdown would do to risk appetite.

With that in mind, Goldman notes that while their base case for the impact of tariffs on US growth is still "fairly modest", a worst-case scenario that includes a 10% equity market (SPY) selloff would entail a peak hit to US GDP of roughly 0.8%. 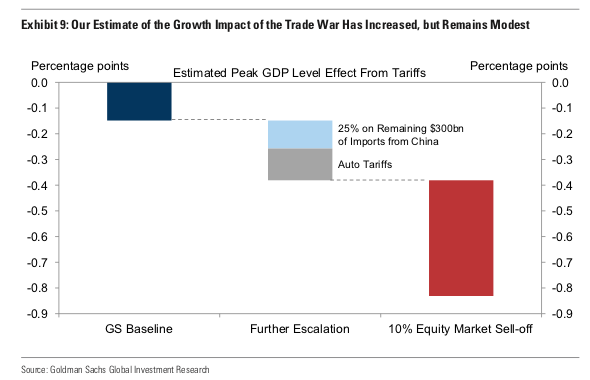 In that scenario, the reaction function for the Fed would likely skew towards policy easing to offset the drag on growth and help shore up flagging market sentiment.

If inflation proves sticky while growth decelerates rapidly, you're left with a stagflationary outcome.

On the bright side, the worst-case scenario seems unlikely to materialize. Then again, as of this time last week (I'm writing this on Sunday morning, around 8:00 ET), nobody imagined we'd be talking about a tariff escalation again anytime soon. This situation quite literally changed overnight and the trade hawks are obviously back in the driver's seat (which, by extension, means Steve Mnuchin has likely fallen out of favor when it comes to pushing his relatively dovish stance).

If the US were to move ahead with tariffs on the remainder of Chinese imports and president Trump were to go forward with auto tariffs, all bets would be off both in terms of the likely trajectory for asset prices and in terms of US monetary policy.