This article focuses on an important development for Japanese equities that investors should be aware of. Recently there have been significant outflows from Japan equity ETFs. Typically, outflows of this magnitude send a bullish contrarian signal, and throughout this article we will put forward some points that temper this bullish signal and round out the case.

The chart shows that recently, as noted, there has been substantial outflows - indicating a loss of confidence in Japanese equities. 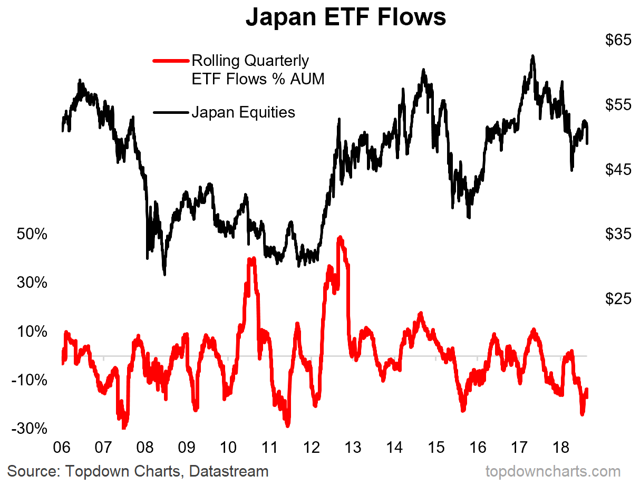 Specifically, the chart shows the rolling quarterly ETF net-flows as a percentage of assets under management [AUM] (with price effects taken out) against the price of Japanese equities which is represented by the WisdomTree TR/Japan Hedged Equity ETF (NYSEARCA:DXJ).

Typically, outflows of this magnitude send a bullish contrarian signal. The logic behind this is simple, the time to buy is often times when fear and pessimism are at a maximum since this usually occurs near market bottoms.

In terms of the macro outlook for Japan, a recent article by the Japan Times discussed the most visible threat to Japan's economy as the planned consumption tax hike in October 2019 from 8% to 10%.

The article stated that according to a mid-November analysis from Nomura, the impact of the consumption tax hike will reduce private consumption by 0.2 percent over the long term, a consequence of the tax hike taking a permanent bite out of household spending power. This leaves less money for consumers to invest in the equity market, thus reducing demand.

Some might argue this point is irrelevant because the Japanese government is preparing countermeasures but many forecasters believe the government's efforts will be unable to completely alleviate the negative effects of the tax hike. Having said that, it's probably reasonable to expect the Bank of Japan to pick up some of the slack; hence we should expect monetary tailwinds to ramp up for stocks.

Besides that, the trade war between the United States and China obviously remains a concern. There's both the immediate impacts in that China is a major trading partner for Japan, and there's a sort of analog with Japan potentially coming into the trade-war cross-hairs too as the Trump administration continues to run a hawkish policy on trade.

Another risk for investors to be cautious about is the possibility of a global economic downturn. The most recent Japan Economic Outlook published by the Daiwa Institute of Research put forward five specific risk factors for the global economy and the impact these may have on the Japanese economy.

The report states that if any of the downside risks were to materialize in 2019 and beyond, including (1) the Trump administration straying off course, (2) the Chinese economy worsens, (3) the European economy deteriorates, (4) Japan's new overtime restrictions tighten, or (5) the deterioration of personal consumption due to the collapse of the stock market, Japan's real GDP could decline by up to around 3.6%.

With such a long list of worries, it's little wonder that investors have been shunning Japanese equities - and those with a contrarian bone in their body should be taking keen interest at this point.

Aside from the contrarian bullish signal from fund flows, Japanese equities are still attractive valuation-wise as the earnings yield remains substantially higher than the JGB 10-year yield. There's also the point that investors may be overestimating the potential negative impact of the tax hike (if it even happens!), and with monetary policy stimulus still substantial, maybe investors should take a second look at Japan.

If you like my free articles, you will probably like our Marketplace service, which takes a deeper look at select ideas, provides you with a big picture weekly global market snapshot, and a monthly cheat-sheet on the outlook across global markets... Must-have market-intel for active investors.