Uncertainty is one of the big killers of business investment. Those animal spirits among businessmen that Keynes talked of - which drive the business cycle - are really just what people think about that near future. If all think it's going to be bad then little investment takes place. Given the role of investment in boosting the economy this becomes self-fulfilling. Low investment leads to poor economic performance, even a recession. Similarly euphoria leads to booms.

One of the creators of uncertainty is instability. If we don't know what's about to happen we are, of course, uncertain. In common language the two are close synonyms even if we use them differently in technical jargon. So, if we can measure instability then we might be able to predict uncertainty and thus the business cycle. Which is just what the World Instability Index attempts to do.

According to the latest IMF projections, the global economy is now projected to grow at 3.3% in 2019, down from 3.6% in 2018. This is partly due to rising uncertainty in many parts of the world. This column shows how these statements are in line with the latest reading of the World Uncertainty Index, which shows a sharp increase in the first quarter of 2019. The increase in uncertainty observed in the first quarter could be enough to knock up to 0.5% of global growth over the course of the year. 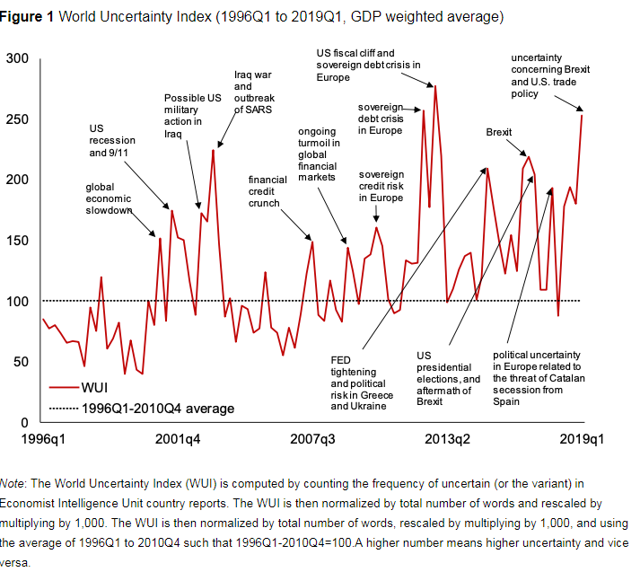 For a detailed description of how the index is constructed look here:

Uncertainty spikes tend to be more synchronized within advanced economies and between economies with tighter trade and financial linkages. The level of uncertainty is significantly higher in developing countries and is positively associated with economic policy uncertainty and stock market volatility, and negatively with GDP growth.

In a panel vector autoregressive setting, we find that innovations in the WUI foreshadow significant declines in output.

What that least means is that they've checked that it does predict what they think it should. It's thus - for as long as the correlation lasts of course, remember Goodhart's Law - a useful statistic for us to be considering. We've found something that tells us what is *likely* to happen, something that we can measure ahead of time.

If you'd like to look at the data sets, check them out for yourself, they can be found here.

Note also that it's being done by some fairly serious players. And it's not just something being sold to us. 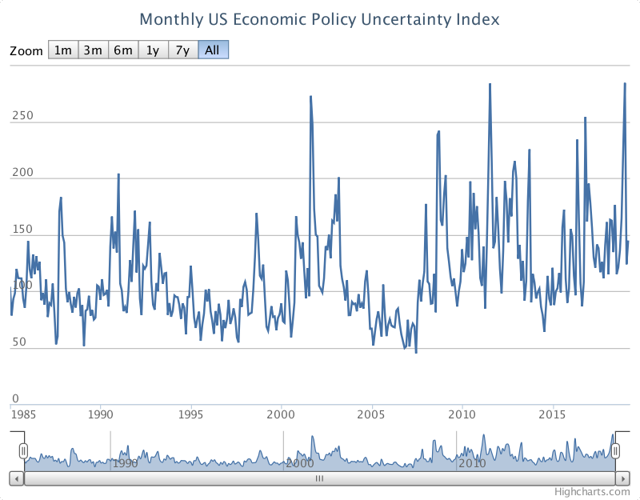 In our work, we find that increases in uncertainty foreshadow significant output declines. Based on our estimate, the increase in uncertainty observed in the first quarter could be enough to knock up to 0.5% of global growth over the course of the year. This average effect, however, masks significant heterogeneity within and across countries. Within countries, we find larger effects for sectors with higher financial constraints. Across countries, the effect is estimated to be larger and more persistent in countries with lower institutional quality.

It's worth having a look at this, most certainly. It's not generally adopted as yet, isn't something already on every Bloomberg screen - and the market as a whole isn't fully turned on to the implications. This means that, for the moment at least, it's likely that it has significant predictive power and that we're among the few paying attention to it.