MicroVision Inc. (NASDAQ:MVIS) is a pioneer in laser beam scanning with over 500 patents issued and pending. This technology enables the projection of screens on tabletops. This product comes in two varieties, an interactive one and a display-only. From the company's March 2019 IR presentation: 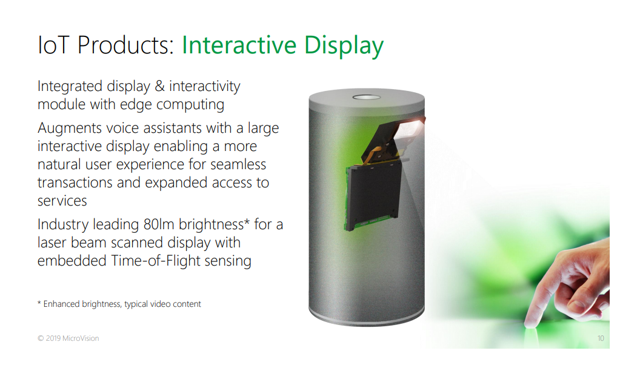 The interactive technology is driven by LiDAR (from the Q1CC):

I'll just reiterate it, because of our capabilities with our LiDAR not only can we mimic touch 10 finger touch, we also have the ability to recognize gestures.

This can't work without AI smarts, of course (from the Q1CC):

by leveraging our machine learning algorithm we can process the LiDAR image view that receive real time on the device and subsequently interact with the OEM products, limiting the same standard interfacial 10 finger touch display products or displace solutions would have.

The display-only solution provides a tabletop projection screen and doesn't need the edge computing and AI smarts, as there is no interactivity with the projected image. It's also cheaper as a result. 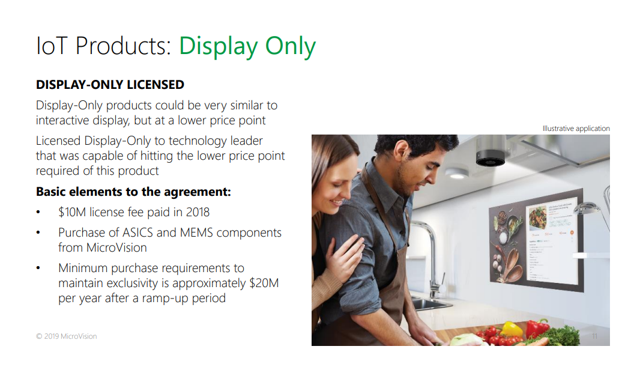 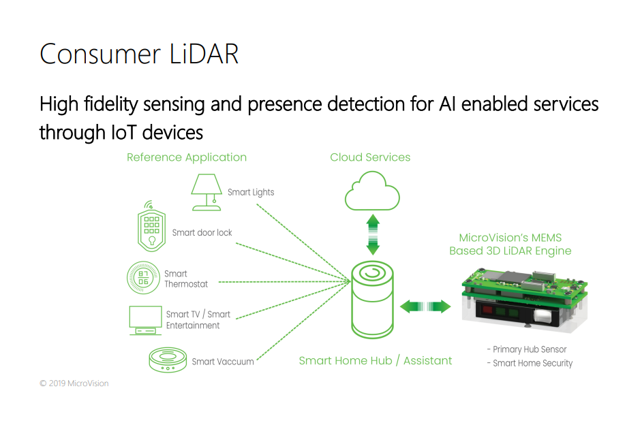 These are IoT solutions which (apart from the display-only solution) have significant edge computing power and AI capabilities, but the company is targeting AI platform owners: 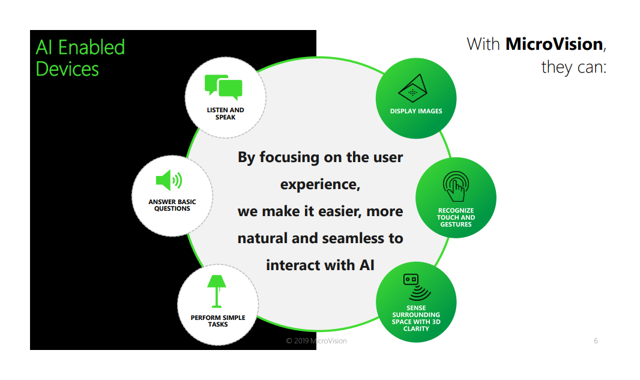 the disruptive capabilities of our Consumer LiDAR are very interesting. We've targeted AI platform owners as we believe that the advantage that it provides for an AI connected home control center, home hub is very pronounced to have the awareness or the presence of what's going on in the space around it and the applications that it could then control through a central connected device or a platter of applications.

And not surprisingly, the company is also targeting the automotive market with its LiDAR, but given the competition and the lack of concrete prospects, this opportunity looks further away. 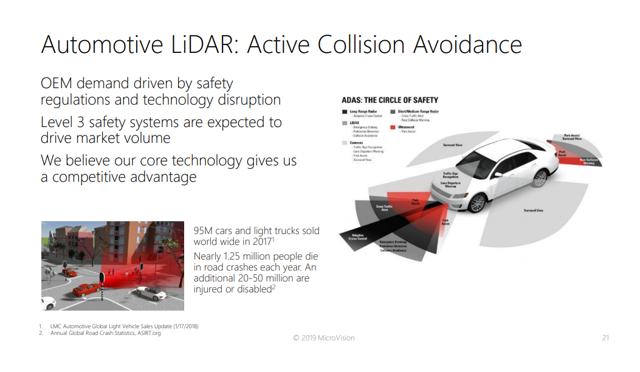 There is a video on how these technologies work. Now so far the company has been mostly in development mode, generating income from several potential customers:

But that looks about to change this year. 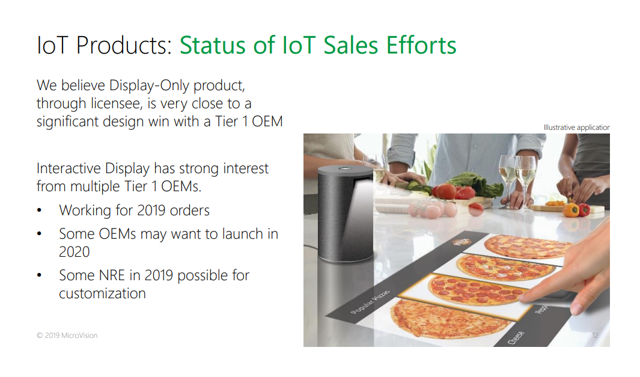 There are several concrete opportunities here:

The April 2017 contract from a Tier 1 technology company (it's unclear whether this is for the display-only or the interactive technology) provided the company with $10 million of initial capital (which will be either kept if the client decides not to purchase or deducted against sales). 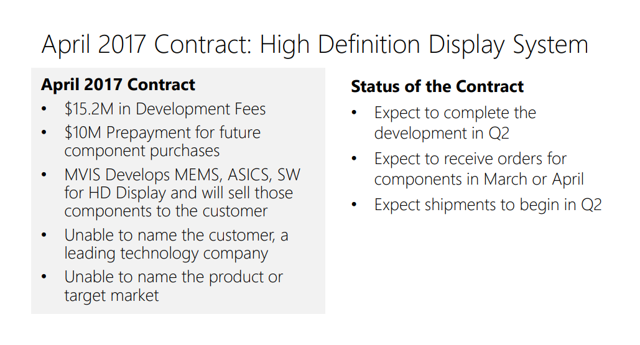 But there have been additional payments which are responsible for a large part of MicroVision's revenues. For instance, it just invoiced $2.2 million of the $2.5 million final milestone, and the other $300K will follow.

In total, the development stage earns the company $15.1 million, of which just $1.3 million remains to be recognized, which will happen in Q2.

MicroVision also received a purchase order for production material and will start shipping these items in June this year, with more to come (from the Q1CC):

The customer clearly indicates they're ramping the product to ship in the second half of 2019. All indications are that still to plan at record, we absolutely expect that this first order as you describe it, the small initial order will be followed by subsequent orders and we'll provide those details as they become available.

Management is confident that the design win for the display-only solution will turn into orders in Q2, and is in talks with several Tier 1 OEMs for the interactive display module.

So all in all, management is optimistic that the company will have three of its products in the market in H2 this year. How can management be so optimistic? From the Q1CC:

While many people might view the purchase order as the start of the activity to enable product launch, as our April 2017 contract clearly demonstrates, when working with Tier 1 customers like this, this is not always the case. A lot of important activity to support the market launch goes on behind the scenes before there is a purchase order. For example, customer and product roadmaps, marketing plans and forecasts need to be developed and production plant set. Based on the work we have done on our display only and the interactive display products. We expect purchase orders to be placed for deliveries in the second half of 2019, representing a major milestone in a very lengthy process. These orders would be in addition to the purchase order from the April 2017 contracts that we are expecting to start shipping in June.

Basically, this says it's based on all the work that goes on behind the scenes.

Needless to say that company finances are not pretty given the development stage they have been in until now, and margins are no exception:

Gross margins are actually not too bad, and there was even a gross profit of $608K in Q1. The large Q4 loss was mostly due to inventory write-down for stuff the company built for Ragentek. MicroVision has started legal proceedings against that company in Hong Kong.

There are still large operating losses, with operating expenses at $8.7 million in Q1. The company expects operating cost to fall and get back to about $7.4 million by the end of the year, where it was a year ago.

Given the substantial losses, cash is crucial. First, let's take a look at the cash flow:

MicroVision is bleeding $22 million in cash a year. How is that financed? Well:

It has no do debt though, which helps. The cash position isn't great given the cash burn. The company had just $7 million in cash and equivalents (down from $13.8 million in Q4), so a new financing seems inevitable. Management commented somewhat cryptically (from the Q1CC):

Given our historical cash usage and our current cash balance it's logical to assume that the company will be seeking financing this quarter. While we can't comment on what form that financing might be, we're confident that funds will be available.

Perhaps some deal is in the works. Indeed, on the day of the Q1CC, MicroVision also announced an $11 million equity sales deal with Lincoln Park (from the PR):

Under the terms of the agreement, Lincoln Park will immediately purchase $1 million in shares of common stock at a purchase price of $0.9821. In addition, for a period of 24 months, the Company has the right, at its sole discretion, to sell up to $10 million of additional common stock to Lincoln Park, subject to certain limitations, based on the prevailing market prices of the Company’s shares at the time of each sale.

And a few days after the Q1CC, it raised $2 million via another 2.25 million equity sale. 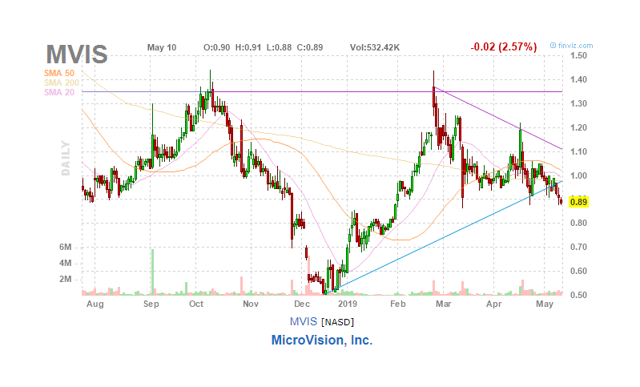 It isn't very useful to value the company at this stage. For starters, most of its revenues are falling away, i.e., the development income of its April 2017 contract customer is almost running out.

This needs to be replaced by actual sales, which management expects in H2, and without any clear indication of the amount of sales, a valuation exercise is clearly of limited use, and even on the basis of development income alone, the valuation wasn't exactly negligible:

The company is highly speculative at the moment, even if it looks on the verge of making the transition from development to sales. With a $100 million market cap, there is quite a lot of sales expected already by investors.

We probably need the prospect of something in the order of $40-$50 million in sales in order to support the present market cap, and from what management told us on the Q1CC, there is little to gauge with any degree of confidence.

Sales seem likely, and these could be large. In a hypothetical, that April 2017 contract could be Amazon (AMZN) or any of the other big tech companies producing these voice-controlled computers like the Echo. That's possible, and it would clearly propel sales to the necessary levels (and probably well beyond), but we have no way of knowing.