The stock market has been a leading indicator in the past two recessions. Both of these have been preceded by significant declines in the financial markets. Given the current apparent strength of the economy, I am taking a look at key economic indicators relative to the most recent market peaks in 2000 and 2007 to see if we may see another repeat. I am looking at how the key economic indicators correlate with the past two business cycles and what they tell us about our current state. By aggregating these indicators into a unified model we can see that we are currently at a level not seen since the financial crisis and on a descending path from another peak.

A myriad of economic indicators exist that are read like tea leaves on a weekly basis. But the key question is which of these tell us a story about the relative strength of the economy with regard to potential market impact. The past two decades have been quite unique in that we went through two major asset bubbles within a short time frame. We had more data and indicators than ever before. This analysis is an attempt at looking at those indicators that had the strongest correlation with the market movements in the past three decades and combining them into a single model - the “bubble score”.

The following key indicators show the most correlation with market movements over the past two decades:

Let's take a brief look at these indicators and how they fit into a bigger picture.

The initial claims of unemployment behaved very similar to the general unemployment rate, but given the more frequent nature of updates, it provides a bit more responsive data. However, it exhibits the same lagging effect with regard to the financial markets.

Core inflation also exhibits correlation with market movements. The expected behavior at the peak of the business cycle would be a rise in inflation. The inflationary peaks during the dot com bubble of 2000 and the financial crisis were occurring at different times relative the the market peaks and subsequent recessions, but a general correlation exists that may provide some value in an aggregate model. During the current period, inflation has not risen as much as it has in the past late in the cycle.

The high-yield debt market provides valuable insight. During the dot com bubble, most of the rise in the spreads occurred past the peaks of the market due to the large number of junk bond defaults. However, the yield started rising already before April 2000 and continued to climb steadily. During the financial crisis, the yield quickly rose as due to looming bond defaults. The inflection point was reached in June 2007, after which the spread steadily rose. So far we have only seen a short spike in December when the market panicked briefly with respect to high yield debt and the debt market dried up briefly.

The yield on the two year T-Note has been a solid indicator in both of the past two recessions. It has also corresponded well with both market peaks. We see a clear decline in the yield since last year, just as we saw in 2000 and 2007. The bond market has a solid track record with calling recessions early.

The 2/10 Treasury inverted exactly at the peak of the dot com crash in April 2000. Prior to the financial crisis, it inverted in 2006. In that case it was well ahead of the peak of the S&P 500. It inverted again a few months later. The 2/10 never inverted completely in 2018/2019, but came very close. Other spreads have inverted and the 2/10 shows signs of rising again - a sign of a potential low inflection point.

Both market peaks also correlated well with high consumer sentiment, given the overall economy was still strong. There was no sign of immediate economic weakness ahead at the peak of both markets. Consumer confidence has again peaked recently and not reattained these peaks.

Vehicle sales rose and fell with both economic cycles, likely attributable to general economic conditions. We again see this flattening out several months ago.

Capacity utilization shows a general correlation to the business cycle. We were moving towards the high point of recent historic averages. However, over the last months there is a noticeable downtrend.

The Shiller P/E (CAPE) ratio provides a clear indication of the overall market valuation and correlates well with both peaks. CAPE is by nature a lagging indicator, but provides a good input to determine the absolute level of an aggregate score with relation to past cycles. 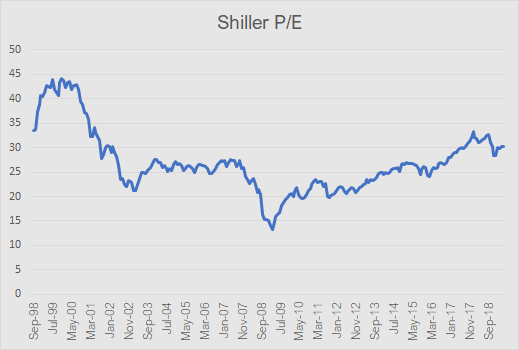 Housing is regional and the extend to which each cycle was influenced differs. In the dot com bubble, especially the San Francisco Bay Area was exposed to huge price increases, similar to those of today. During the financial crisis of course, the entire country was impacted. Now we again see significant rises in home prices. For those reasons, taking housing data into account is critical. I selected five indicators that are updated on a monthly basis to provide insight into the housing market. They all paint a similar picture, but timing of each indicator is slightly different.

The elevated levels of monthly supply of houses is a strong indication of weakness in the housing market. Further rises, especially in the summer, would be worrisome.

Again, here are hints of leveling off since late last year.

The National Association of Homebuilders' Housing Market Index peaked over a year ago. 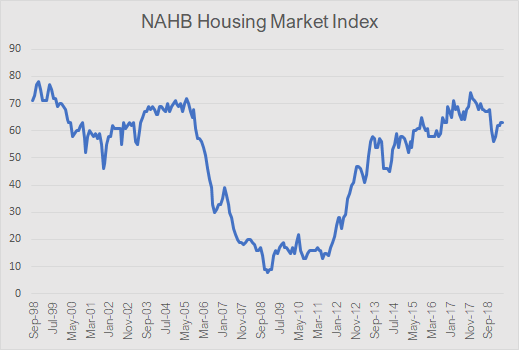 Now let's put it all together. Based on all of the indicators above that show relevance to the past two business cycles and major market peaks.

Below is the plot of the aggregate score across the time frame of 1997 - 2019 (green). The score is an equally weighted aggregate score of the indicators above. For reference, the S&P 500 and Nasdaq are also plotted inflation-adjusted. 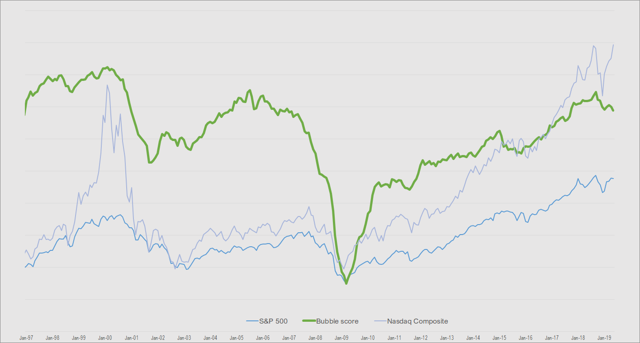 There is a clear downtrend since October 2018, when the S&P 500 peaked last year.

If we compare the aggregate "bubble score" to 2000 and 2007 we can clearly see that the overall market conditions are very similar. We are roughly at the same level as the financial crisis and slightly below the dot com bubble.

The current market moves show a notable correlation to the 2000 dot com crash. Although there was a drop in fundamentals in 1998 with a subsequent melt-up, given the latest developments we can probably now rule out a melt-up scenario. That leaves a dead-cat bounce as the most likely scenario, in which April 2000 corresponds to October 2018. If history is any indication, then economic fundamentals will soon weaken and we may see further, precipitous and volatile declines in the market.

Valley Trader
205 Followers
Equity and options trader. My background is economics, finance, and computer science. I worked across Silicon Valley and at a Big 4 accounting firm since the dot com crash. I believe short selling contributes to healthy markets, acting as a counterbalance to the exuberance that is often blinding investors from subsurface accounting dangers and frauds.
Follow

Disclosure: I am/we are long PSQ. I wrote this article myself, and it expresses my own opinions. I am not receiving compensation for it (other than from Seeking Alpha). I have no business relationship with any company whose stock is mentioned in this article.