Tesla (NASDAQ:TSLA) is in the process of acquiring Maxwell Technologies (NASDAQ:MXWL) for something like $288 million in Tesla stock. When I first saw this deal I just didn't get it. What did Tesla need with a super-capacitor company? Super-capacitors have much higher power (rate of charge / discharge) than lithium batteries but much lower energy storage capability for the size / weight. Tesla already makes about the quickest cars around, why would it need to buy some little California company just to make its cars even quicker? It made no sense.

A little research has led me to understand what Tesla's acquisition of Maxwell is all about, and it comes down to a single word, fibrilize. Until recently, I did not appreciate that this word could actually be used in polite conversation, but yes, it's OK to say out loud.

Fibrilize is a verb, and in the context that applies here it may be thought of as what happens when, on a hot day, you step on a bit of discarded chewing gum on the sidewalk. The gum adheres to the sidewalk and to the sole of your shoe, and when you take another step, you fibrilize the gum. You see, all those stringy bits of gum connecting your lifted foot to the sidewalk are called fibrils. Until now I have used mostly four letter words to describe this process.

Tesla just spent $288 million for Maxwell's electrode process, and that process works by fibrilizing bits of PTFE (Teflon) mixed in with particles of active anode or cathode material resulting in a self supporting film of anode or cathode electrode material. One way to think about Maxwell's process is to consider a large tank filled with golf balls and pieces of bubblegum. At the bottom of the tank there's a two-dimensional funnel ending in a narrow slot. As the weight of the golf balls above pushes golf balls and bubblegum pieces at the bottom through the slot, golf balls push, slide and roll against one another and occasionally a bit of gum gets squished between. As the golf balls continue rearranging to fit through the slot, the golf balls end up tied together with fibrils of bubblegum. That's the Maxwell process. The films of anode and cathode materials are then laminated to current collector foils to make anode and cathode electrodes that are wound up with separator film between to make the guts of a battery cell.

Conventional lithium battery manufacture uses a solvent in which is dissolved binder material. NMP (N-Methyl-2-pyrrolidone) is a solvent of choice. The solvent with dissolved binder is mixed with anode or cathode powder and the resulting slurry is spread across electrode current collector foil and dried. The solvent is toxic and must be carefully recovered, purified and reused. Enormous, expensive and complex electrode coating machines are required. This image taken from an Electric Motors Club video shows one such machine under construction at Tesla's Nevada GigaFactory. 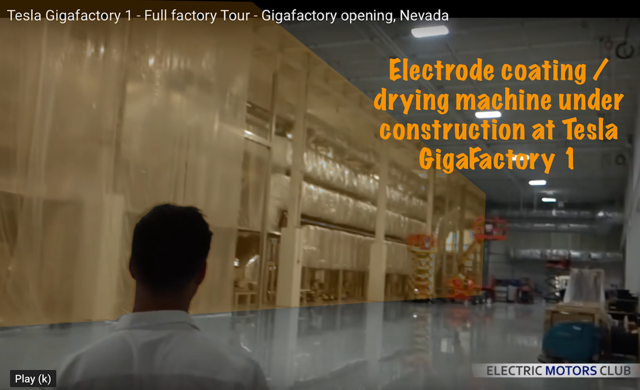 The Maxwell dry electrode process is much simpler, uses no solvents, and as we will see, offers an important but not so obvious advantage. The process begins with electrode powder, say Lithium Nickel Cobalt Aluminum Oxide powder for a Tesla / Panasonic (OTCPK:PCRFF) NCA cathode electrode. A small amount (~5-8%) of finely powdered PTFE (Teflon) binder is mixed with the cathode powder. The mixed cathode - binder powder is then put through an extruder to form a thin ribbon of electrode material.

Extruded ribbons of electrode material are laminated to current collector foil to create a finished electrode. The process is illustrated conceptually in the following sketch. 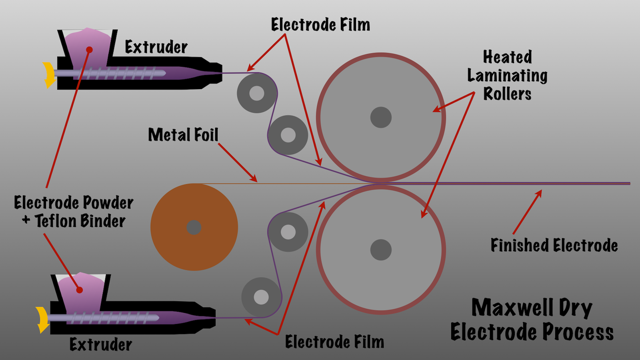 The Maxwell process works for both cathode and anode electrodes. Use NCA powder and aluminum foil to get a cathode electrode. Use graphite powder and copper foil and out comes an anode electrode. There's a bit more to it - add a bit of different polymer to the Teflon for better strength and ion transmission. Add a bit of other material to improve electrical conductivity. Extruders can be "decoupled" from the laminator by winding electrode film into rolls which are then fed into the laminator. But the process remains very, very simple.

We know the Maxwell process works. Maxwell Technologies has used this process commercially to its make Super-Capacitors. Capex to make batteries will be far less using this simple process. And there's no solvent involved.

To fully appreciate the importance of avoiding solvent in the electrode manufacturing we need to look at how the whole lithium battery is made.

Lithium ion batteries are assembled "discharged." The materials are in comparatively low energy states this way - they don't react violently when exposed to air for instance. The cathode material, a lithiated metal oxide is fully lithiated and the anode does not contain any lithium. This means that all the lithium ions (with the exception of a tiny amount in the electrolyte added at the end of battery assembly) is carried within the cathode material.

And herein lies a bit of a problem. When the battery is filled with electrolyte and charged for the first time, some of the lithium ions coming from the cathode material are used up by a reaction between the anode, the electrolyte and available lithium ions. This parasitic reaction is what forms the SEI (Solid Electrolyte Interphase). The SEI is an essential part of the battery because it prevents the electrolyte from reacting with the carbon in the anode. The problem is that once charged for the first time, there isn't enough available lithium in the anode to completely fill up the cathode material when the battery discharges. The result is "first cycle capacity loss" and is seen with all common types of lithium ion batteries. The reason first cycle capacity loss really matters is that the lithium used up forming the SEI got loaded into the battery as lithiated cathode material which is roughly 20 times as heavy as the lithium contained. The battery ends up living its whole life carrying around a bunch of heavy cathode material that never get used because some of the lithium it initially contained is bound up in the SEI.

A solution would seem to require nothing more than adding an extra pinch of lithium to begin with to make up for what is used up forming the SEI. There's just a small problem. To work, the added lithium has to be lithium metal, or lithium added to the graphite of the anode. Lithium metal and carbon mixed with lithium metal don't get on very well with solvents used in making battery electrodes. Loud noises accompanied by smoke and fire is involved. So, lithium battery makers have just lived with first cycle capacity loss...

But, the Maxwell process doesn't use solvent. And incidentally, Maxwell has a pending patent for adding lithium metal to the anode using their dry process to compensate for first cycle capacity loss...

What the addition of excess lithium can do is two things. First, a little added lithium can make up for the lithium consumed in forming SEI on initial charging and thereby reduce first cycle capacity loss. This means more battery capacity and higher energy density.

Second, adding just a bit more excess lithium can compensate for lithium that gets used up over time because the SEI continues to grow in tiny increments with charge cycling. A little more added lithium can mean batteries that last much longer.

Tesla is acquiring Maxwell Technologies for something in the neighborhood of $288 million in Tesla stock. Maxwell's Super-Capacitors do not appear to be immediately useful to Tesla. On the other hand, the patented process Maxwell uses to make Super-Capacitors can dramatically cut Tesla's (and Panasonic's?) capex requirements for battery manufacturing. In addition, because this is a "dry" electrode manufacturing process, allowing extra lithium to be added, both capacity and cycle life of Tesla / Panasonic batteries will likely improve.

Panasonic recently announced cutbacks to further capex for battery manufacturing at GigaFactory 1. Some have see this as evidence of Panasonic losing faith in Tesla's ability to grow sales. Another and perhaps more interesting explanation may be that Panasonic sees spending more on what's about to become an obsolete battery-making process as a waste of resources. Investors may want to watch closely what happens in the near term with the Tesla - Panasonic relationship.

These writings about the technical aspects of Tesla, electric cars, components, supply chain and the like are intended to stimulate awareness and discussion of these issues. Investors should view my work in this light and seek other competent technical advice on the subject issues before making investment decisions.

Randy Carlson
2.55K Followers
I am an engineer and long time technical consultant specializing in control and instrumentation systems for medical, industrial, vehicle and aerospace companies. The technical, cultural, market, regulatory and other factors that separate successful products and companies from their peers has fascinated me for many years. My investment experience is limited to my own accounts.

Disclosure: I/we have no positions in any stocks mentioned, but may initiate a long position in TSLA over the next 72 hours. I wrote this article myself, and it expresses my own opinions. I am not receiving compensation for it (other than from Seeking Alpha). I have no business relationship with any company whose stock is mentioned in this article.