A Tale of Two IPOs

The two dominant ridesharing companies IPO'd recently: Uber Technologies, Inc. (NYSE:UBER) on the New York Stock Exchange and Lyft, Inc. (NASDAQ:LYFT) on the Nasdaq. Both stocks have fared poorly since their public trading began. With recent trade tensions leading markets significantly lower, the IPO timings have not been ideal. Lyft's operations are focused in the US, with some business done in Canada, while Uber has operations in 63 countries around the world. However, a closer look at SEC filings from both companies reveals real cause to be cautious about the future of these companies and their expensive valuations.

Lyft stock has lost almost half of its value since the high on its first day of trading on March 29th. There was a massive sell-off during the first few days after the IPO, and after a short recovery period, the selling resumed. From early-mid April until the earnings release, the stock traded mostly sideways, only to sell-off after the latest quarterly loss of $9.02 per share was announced after market on May 7th. Trade war market weakness and the dismal performance of the Uber IPO may have helped fuel further negative sentiment on the stock. 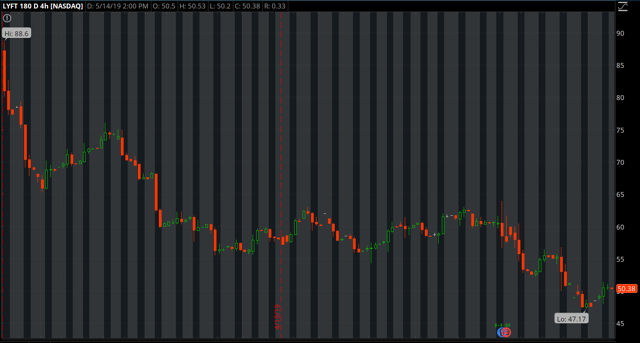 Looking at the following quarterly statements, we can see that Lyft is indeed rapidly growing revenue. A cursory investigation of the following data could lead to a quite bullish perspective on the company's growth. Revenue from fiscal 2019 Q1 shows a 95% YoY increase and a 16% quarterly increase. However, Lyft is consistently showing large net losses and is guiding for an adjusted EBITDA loss of $270-280 million for Q2 2019 on $800-810 million of revenue. This would be an even wider loss for a much smaller quarterly increase in revenue.

This kind of growth might look attractive if there was some sort of clear path to profitability in the future. However, with Lyft there only seems to be hope for disparate and risky bets such as scooter and bike rentals and autonomous taxis. There seems to be no real plan for a transition to profitability for the company's core business, only a plan for continued rapid expansion. It is possible much of Lyft's growth has come from poaching customers and drivers off of Uber through competitive pricing and driver incentive programs. Lyft's ridesharing market share increased from 22% in December 2016 to 39% in December 2018. The company has previously offered drivers attractive one-time bonuses for signing up for the ridesharing program, along with promotional events that discount rides for riders. This kind of expansion and war of attrition with Uber does not look sustainable.

The dual share class structure of LYFT stock concentrates voting power in the hands of co-founders Logan Green and John Zimmer. This only further erodes my confidence in the company given its current strategic direction.

I think the company puts it nicely in the Risk Factors Summary section of its S-1:

We have a history of net losses and we may not be able to achieve or maintain profitability in the future;

We face intense competition and could lose market share to our competitors;"

Uber - Largest loss by a startup the year before its IPO?

Uber started trading last Friday, the 10th of May. After some initial buying, the sellers took control and dropped the stock below its opening price on the first day. Selling continued after-hours, and the stock sold off along with the broader market on Monday. On Tuesday, May 14, the stock price did see some recovery after news was released that the U.S. National Labor Relations Board said Uber drivers are classified as contractors, not employees, and are thus not entitled to minimum wage or overtime pay. 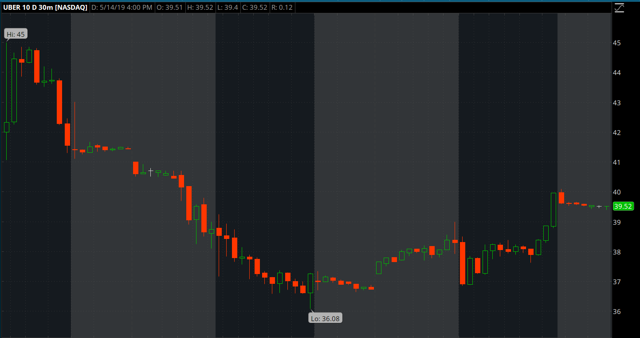 Uber was technically profitable in 2018 because it sold its Russian business to Yandex (YNDX) and its Southeast Asian business to Grab (GRAB), bringing in nearly $5 billion. 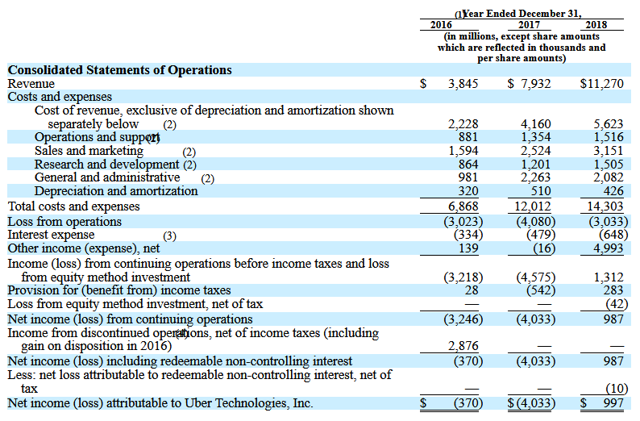 This can be seen on the above statement under "Other income (expense), net" for 2018. Now, is this the type of behavior one wants to see from a high-growth company? Selling off chunks of its business? Excluding the income for this sale would leave Uber with a loss of $(3,996) on the statement above - nearly $4 billion.

Even more troublesome is the recent trend of Uber's revenue. To get a clearer picture, we must look at the "Core Platform Adjusted Net Revenue," which removes excess driver incentives and driver referrals from "Core Platform Revenue," since these are really expenses for the company anyway. 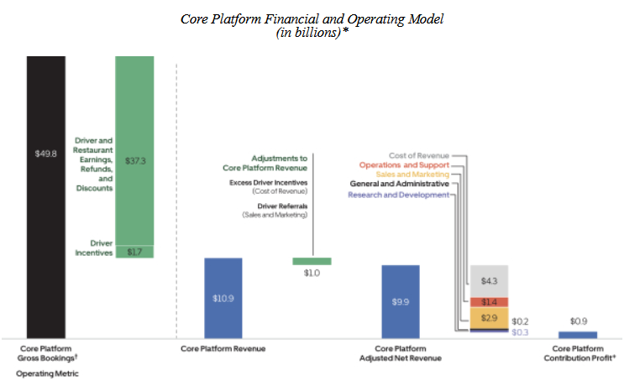 The above chart shows a stalling of revenue growth and essentially flat revenue for the past three quarters (Q2, Q3, Q4 of 2018). Now, this is really not what you want to see from a "growth company." Although the yearly revenue results look positive and show enormous growth (2016 - $3.8 billion, 2017 - $7.9 billion, 2018 - $11.3 billion) seasonality should not be a factor in these quarterly results and is not apparent in the revenue results from 2017. We get a much clearer perspective of the health of the core business from the adjusted quarterly net revenue numbers from the chart above.

Margins from Uber's core business also display unhealthy fluctuation. Its margins may be under pressure from pricing battles with rivals such as Lyft.

Rivals abound for Uber in every sector that it is choosing to expand into. Well-established logistics and shipping companies such as United Parcel Service (UPS) and FedEx (FDX) and others already dominate the market that Uber Freight is seeking to expand into. Global expansion is threatened by foreign transportation network companies such as Didi Chuxing (DIDI) and Grab. Uber Eats faces numerous local and nationwide competitors, such as GrubHub (GRUB), Instacart (ICART), DoorDash (DOORD), and Postmates (POSTM). With the company operating at a loss, it makes one wonder why it is trying to expand in multiple different directions instead of focusing on achieving profitability in its core business. Clearly, revenue growth has slowed. Is it possible that Uber's core business will never be profitable?

Uber CEO Dara Khosrowshahi has compared the company's business model to Amazon's (AMZN), and noted that the stocks of Amazon and Facebook (FB) also struggled after their IPOs. Time will tell whether Uber can have similar success, but the comparison seems very strained at the moment.

The personal mobility, meal delivery, and logistics industries are highly competitive, with well-established and low-cost alternatives that have been available for decades, low barriers to entry, low switching costs, and well-capitalized competitors in nearly every major geographic region.

We have incurred significant losses since inception, including in the United States and other major markets. We expect our operating expenses to increase significantly in the foreseeable future, and we may not achieve profitability.

For an extensive list of Uber's competitors in all sectors of its business, see pages 32 and 33 of the company's S-1 filing. There are a lot of them.

Amazon and Facebook were able to grow past early losses into profitability by creating unique services that carved out a large niche in their markets, and have been able to expand due to the dominance of their core businesses. It is evident that Uber and Lyft do not possess the same dominance, simply because they both do the same thing. Lyft's ability to scale up and compete with Uber shows that the core business of these companies has a very shallow moat indeed.

There will be the constant threat of competition and disruption in the ridesharing and broader transportation business. Uber and Lyft may have a head start in some areas, but many larger tech companies such as Google (GOOGL) or Amazon have a much larger pool of resources and talent to throw at solving transportation issues. Google's self-driving car unit Waymo is a direct threat to Uber and Lyft. Tesla (TSLA), after all its missteps, is still another serious threat and is one of the only companies to successfully deliver functional self-driving auto-pilot technology. Amazon's efforts at building its own logistics and delivery services show that divisions such as Uber Freight will face stiff competition as well. Legacy providers such as UPS and FedEx will provide further competition in this area. 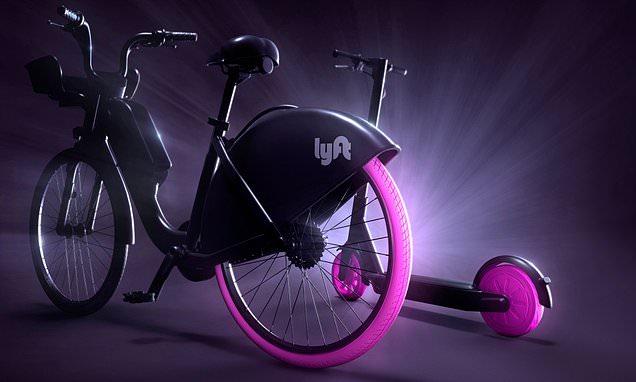 Much fuss has been made over scooter and bike rentals in the companies' larger city markets. I cannot see how this can possibly be a good or sufficiently impactful way to expand the business. Scooters are simply unsafe and not capable of adequately handling small bumps and cracks in the pavement. Both scooters and bikes are prone to vandalism and abuses by customers and passersby. If you want to ride a bike to work, a much better value proposition is to simply buy your own bicycle (and most who wish to do so likely already ride their own bike). Competition and alternative solutions abound.

At the end of the day, Uber's and Lyft's core businesses are very popular phone apps that connect drivers with passengers. The apps generally work well and provide GPS routing, but there isn't really anything revolutionary about the technology. Expanding into sectors such as self-driving cars and flying taxis will take excessive amounts of capital and will face stiff competition - these ventures should be regarded as moonshots with little chance of success.

There is no question that Lyft and Uber have forever changed the taxi business in North America and worldwide. However, this does not make their equity a reasonable investment. Investors looking for exposure to the transportation industry should instead look to established and profitable companies, such as UPS, which has an attractive forward yield of 3.87% at the time of writing. For exposure to cutting-edge technology such as autonomous vehicles, GOOGL may be a wiser bet that is supported by a profitable and sustainable advertising business. What is your best idea for investing in the future of transportation? Let me know in the comments.