The competition between Occidental (NYSE:OXY) and Chevron (CVX) to buy Anadarko Petroleum (NYSE:APC) lit up news boards and markets everywhere during the last month. Occidental won the company at a price tag of $38 billion. In some places, the competition was styled as an effort to attain dominance in the giant U.S. Permian oil basin.

I disagree with this characterization for two reasons. A) 48% of Anadarko's 2018 U.S. production was natural gas and natural gas liquids. B) Of its oil, most of Anadarko's reserves and production are not in the Permian basin: they are international, in the Gulf of Mexico, or in the D-J (Colorado) basin.

Anadarko Petroleum was founded in 1959 and has been headquartered in the Woodlands, Texas. In early 2019, its market capitalization was $21.5 billion, so shareholders just got a big boost, as the stock price chart below shows. The company employs 4,700 people full-time.

Anadarko explored for oil and gas in Colorado, Utah, Wyoming (the Denver-Julesburg or D-J basin), the Gulf of Mexico, the Permian Basin (Delaware sub-basin) and Africa (Algeria, Ghana, and Mozambique).

At the end of 2018, Anadarko's proved reserves were 1.47 billion barrels of oil equivalent (BOE), of which 1.13 billion BOE was proved developed. For the year, the company added 284 million BOE of reserves "organically" (through drilling).

Subtracting out the international production to look at the U.S. production of 570,000 BOE/D only: 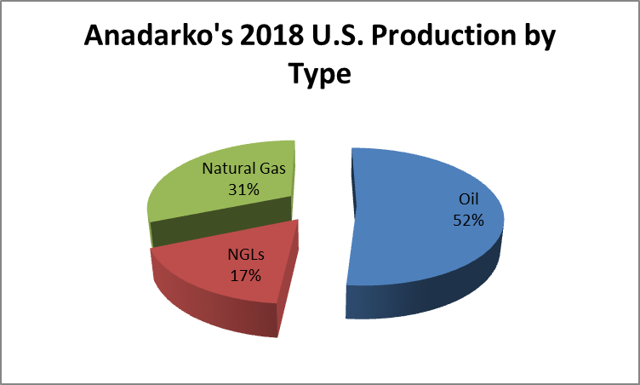 Anadarko also has a production challenge, in that 42% of its production is coming from the D-J basin, and Colorado's oil and gas regulations are tightening up to limit that production.

Anadarko's Permian competitors were shown in a Wall Street Journal chart last week. The top blue bar is Chevron at about 350,000 BOE/D. The second is Occidental at about 325,000 BOE/D. Anadarko is the blue bar toward the bottom at about 100,000 BOE/D. 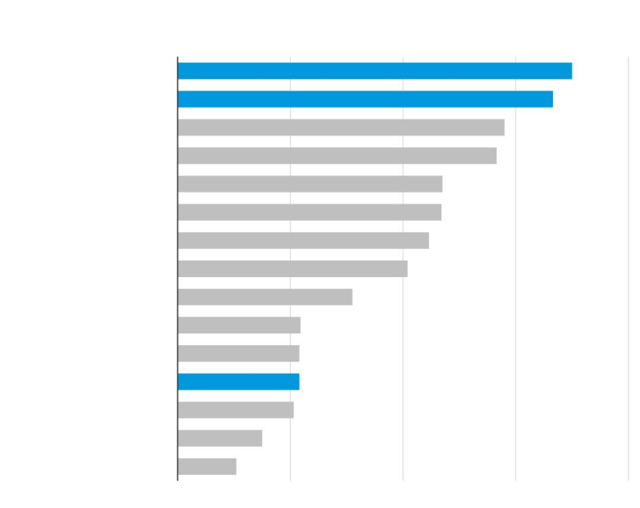 While it is heartening to see Vicki Hollub break the glass ceiling as a major public oil company CEO like somewhat similar counterparts at Oil States International (OIS) and Nine Energy Service (NINE), it is her results that got her the top job, and it is on the basis of her results that her acquisition of Anadarko will be judged. Indeed Jennifer Deckard is no longer the CEO of sand company Covia (CVIA) after its poor results.

Issues concerning Anadarko that have come up presently or in the past are:

A quick glance at the stock price charts of Occidental and Chevron reveal investors' differing assessments of the two companies' "success" in buying or not buying Anadarko.

Hollub has lined up an $8.8 billion sale of Anadarko's African assets to Total (TOT). These were valued at $3.0 billion in the company's 2018 PV-10 SEC reserves assessment. This not only brings in cash but also relieves Occidental of the necessity of investing in Anadarko's Mozambique gas find.

The value of oil production from the Gulf of Mexico has not really been highlighted, nor has the value of Anadarko's midstream partnership, Western Midstream Partners (WES). Analysts have estimated that WES, too, could be sold for several billion dollars. 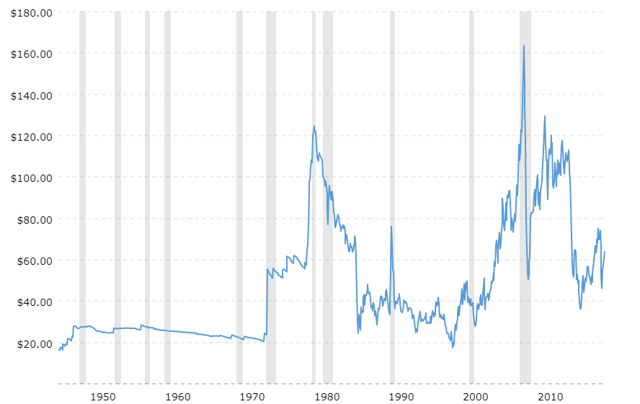 The WTI crude price closed at $62.14/barrel on May 15, 2019. As a change in perspective, the above chart shows a 70+ year chart of inflation-adjusted oil prices.

Investors interested in takeover targets can be assured that virtually every company smaller than a major with Permian production has been mentioned as a target. I recommend carefully parsing reserves and production for its gas/NGL/oil mix in any target company.

I hope you enjoyed this piece. I run a Marketplace service called Econ-Based Energy Investing which features my best ideas from the energy space, a group of more than 400 public companies and in which I have profiled several other Permian oil and gas producers, in addition to Anadarko Petroleum. I offer three different portfolios for your consideration, as well as weekly in-depth articles, including a mix of portfolio reviews and company-specific deep dives. I'm bringing my experience from decades in the industry to this service to help investors deal with the ups and down of the energy sector. Interested? Get started here with a two-week free trial.

Disclosure: I am/we are long BP, CVX, NINE, PE. I wrote this article myself, and it expresses my own opinions. I am not receiving compensation for it (other than from Seeking Alpha). I have no business relationship with any company whose stock is mentioned in this article.