Despite reporting a very strong first quarter, StoneCo (NASDAQ:STNE) shares barely broke above a narrow trading range of $25-$26. Investors may balk over the stock’s valuation. The 19.5 million stock sale at $40.50 may still weigh on shares. What will it take for StoneCo to bounce back and to resume an uptrend that started at the beginning of 2019? 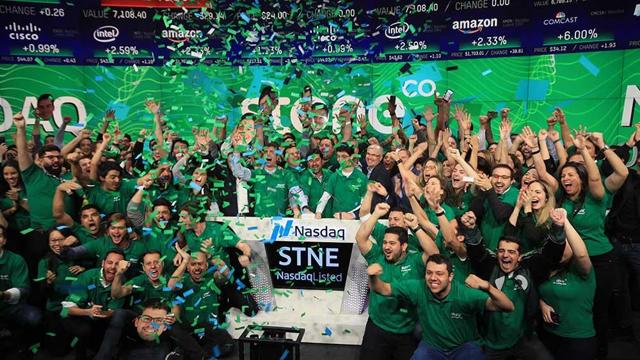 The three software drivers in the business are Collact, vhsys, and Tablet Cloud. With StoneCo enabling SMBs to process payments at a lower transactional cost, merchants are compelled to give the company’s solutions a try. It is little surprise that total revenue grew 86% in the first quarter due to offerings that help cut costs for merchants.

Management also signaled its confidence in the company’s outlook by announcing a share buyback of up to $200 million. So, after selling the stock at $40.50, it will now buy back some of those shares at ~$15 less. Assuming StoneCo maintains its pace of revenue growth, the stock could begin recovering from current levels. Looking back at the share offering, StoneCo did not benefit from it as markets thought. User RangerTwo explained:

The secondary offering was not for the benefit of the company, it was so that certain existing shareholders could exit ( seekingalpha.com/...). StoneCo didn't need, want, or receive the funds from that offering.

Also, it was the misunderstanding of the reason behind the secondary as well as the huge 2-week run up from $32 to $43.50 that caused shares to take a break. The thing that brought it to possible "undervalued" territory was the news on April 18th that a large competitor (Itau Bank) was basically giving away free next-day transfers to Brazilian SMBs.The stock plunged more than 25% that day, all the way back to its IPO price.

So I don't consider a share buyback to be a shady move in the least since the company never actually issued shares post-IPO. They most likely see their shares as undervalued and view buybacks as the most efficient way to give value to shareholders.

StoneCo said its lifetime value of acquisition ratio is ~10 times. This would imply that higher investments in its Stone Hub development in the current second quarter and will yield an even higher return on investment in the second half of this year. Together with the StoneCo partner program, which has 108 integrated partners, expect the firm strengthening its leadership with entrepreneurs.

The company has a goal of offering a less risky credit facility by connecting its systems with the rest of the industry. By aligning the offering with the new regulation, the company would significantly lower its risks.

StoneCo’s peers announced new initiatives that offer lower prepayment rates and other fees. Competitors are effectively offering the same zero prepayment rate program that lets customers try the merchant. StoneCo does not need to change its strategy and does not believe its expected strong growth rates will change. By offering better customer service, its rates need not fall, either.

As the customer base grows, the company is in a better position to raise rates over the long term. Investors should expect continued margin expansion in that period.

According to Tipranks, only two analysts cover STNE stock and have an average price target that is 55% above the recent $27 price. If investors assume revenue growth in the double digits for the next five years, then a 10yr Discounted Cash Flow model suggests the stock is worth over $40 a share.

Source: finbox.io (open the link to change your assumptions)

Markets will eventually notice StoneCo’s strong growth in the last quarter. Investors looking for further proof that the strong business is sustainable will want to wait another quarter. If the next earnings report is strong again, the stock may rally back to at least $30 and eventually to $40.

Thank you for your time in reading this article. For a limited time, I am inviting you to sign up for risk-free trial access to DIY (do-it-yourself) investing. This invitation will close after reaching capacity.

Do-it-Yourself Value Investing is a marketplace service. It is geared towards the technology, biotechnology, health care, and dividend-growth income stocks. Through top DIY model holdings, members are taught how to manage their trading and investments.