A couple of weeks ago, I discussed how auto retailer Carvana (NYSE:CVNA) was a cash incinerating machine. While the company has a recent history of strong revenue growth, it has also resulted in massive losses and cash burn. At the time, I questioned the balance sheet and discussed a need for more capital. After the bell on Monday, the company announced a capital raise, but I don't see it being a long-term solution.

Let me just remind you of the situation I discussed in my prior article. Last year saw $414 million of cash burned in operations, and that was before $150 million was spent on capex and acquisitions. In Q1 2019, the company burned through another $214.5 million in cash due to operations, up from $131.4 million a year ago. Capital expenditures also soared more than $15 million to $43.2 million, further weakening the balance sheet. As a result, here is what the company is offering to investors currently:

Concurrently with the proposed public offering of Class A common stock, Carvana is offering, subject to market conditions and other factors, $250.0 million of additional 8.875% senior notes due 2023 (the “new notes”) in a private offering. The new notes will be issued as additional notes under the indenture governing the outstanding $350.0 million in aggregate principal amount of Carvana’s 8.875% senior notes due 2023 that were issued on September 21, 2018.

Let me first start with the bonds, which obviously are high-rate debt well above market rates since a 5-year US treasury goes for less than 2.23% currently. This deal will result in more than $22 million a year in additional pre-tax coupon interest expenses, further pushing the name from profitability. In Q1 2019, income statement interest was $15.65 million, up from $3.54 million a year earlier, a key reason why net losses nearly tripled.

On the other side of the equation, we have the equity offering. As you can see in the chart below, this will help to send the number of Class A shares (those that trade in the market today) up to almost 50 million by the end of Q2, with another 100 million or so Class B shares that can still be converted to Class A. Insiders have also sold another round of shares since the earnings report. The only good news about dilution is that it reduces the loss per share at quarterly reports when a company is losing money since it spreads out the loss over more shares. Investors should really focus on the net loss number, however, as that is the number that more accurately shows the state of the business. 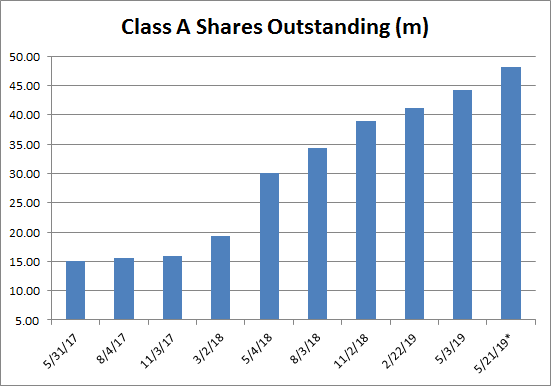 (*Assuming underwriters purchase all shares, and does not include any Class B conversions since most recent quarterly filing. (Source: Quarterly and annual filings, seen here)

So let's take a look at the company's balance sheet, which can be seen in the Q1 shareholder letter. At the end of the period, the company had $85 million in cash and equivalents, along with almost $22 million in restricted cash. On the other side of the equation, Carvana had $914 million in debt at the end of the quarter through its three various debt instruments (floor plan facility, senior notes, other long-term debt).

Let's assume the company sells the full 4 million share allotment at $65 a share after expenses, and that the bond proceeds are $245 million. That will put the company at around $600 million in cash, not including any business changes during Q2, while the company's total amount of debt will rise to more than $1.16 billion after this deal. With the business losing plenty of money and burning even more, how long will this money actually last? At the Q1 burn rate, this capital raise could be gone before Halloween, meaning the company will need to tap the markets yet again. In 2018, only 28% of the yearly cash burn came in Q1, so it's not like this was a seasonally weak quarter where investors can look to tremendous improvement in the rest of the year.

In the graphic below, you can see the company's long-term financial goals. While there has been EBITDA improvement in the past few years, and things are expected to improve moving forward, the real question is how quickly the cash situation can turn. Reducing losses is the easiest way to improve cash flow, but as the business grows, the company also needs to bulk up its inventory base, which consumes cash. This is not a sustainable business if the company continues to burn more than half a billion dollars in cash per year. Carvana's progress has thrived during a very strong US economy, but if things slow down thanks to trade war concerns or other factors, auto sales might be one of the places first hit. 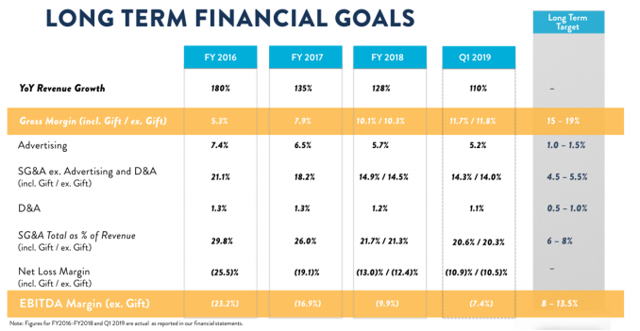 While the capital raise certainly will help the balance sheet a little in the short term, Carvana still has a number of questions to answer in the long run regarding losses and cash burn. When I first covered the name, I was really worried about the valuation, and that's still a problem. This name trades at 1.93 times expected 2020 sales, compared to traditional automakers that sell for less than 0.4 times their projected sales. While Carvana is growing revenues at a much higher rate, that's a very premium valuation for a name that's also losing money and burning cash, while investors are facing a lot of dilution moving forward.

Bill Maurer
33.72K Followers
I am a market enthusiast and part-time trader. I started writing for Seeking Alpha in 2011, and it has been a tremendous opportunity and learning experience. I have been interested in the markets since elementary school, and hope to pursue a career in the investment management industry. I have been active in the markets for several years, and am primarily focused on long/short equities. I hold a Bachelor of Science Degree from Lehigh University, where I double majored in Finance and Accounting, with a minor in History. My major track focused on Investments and Financial Analysis. While at Lehigh, I was the Head Portfolio Manager of the Investment Management Group, a student group that manages three portfolios, one long/short and two long only. I have had two internships, one a summer internship at a large bank, and another helping to manage the Lehigh University Endowment for nearly a year. Disclaimer: Bill reminds investors to always do their own due diligence on any investment, and to consult their own financial adviser or representative when necessary. Any material provided is intended as general information only, and should not be considered or relied upon as a formal investment recommendation.