Pioneer Natural Resources (NYSE:PXD) has finally turned the corner by posting free cash flows for the first quarter. And I believe it will only get better from here as the company is taking a number of self-help measures which, combined with the improvement in oil prices, will further expand free cash flows. That’s great for investors since the company will use that excess cash to reward shareholders with dividends and buybacks. 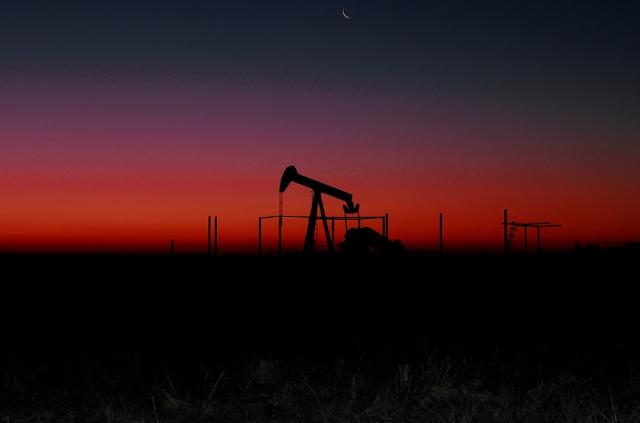 Pioneer Natural Resources is widely known as one of the fastest growing shale oil producers from the Permian Basin. In a short span, it has risen to become one of the biggest operators in America’s premier shale oil play and it had ambitious plans of growing its output at a CAGR of 20% which would have taken its total output to more than a million boe per day, including oil production of more than 700,000 bpd, by 2026.

However, Pioneer Natural Resources has also been outspending its cash flows. With persistent weakness in oil prices, investors have grown frustrated with companies who spend more cash on exploration and production than they generate from oil sales. In order to meet shareholders’ expectations, Pioneer Natural Resources started changing how it operates by moderating its production growth plans and prioritizing cash flows over everything else. The company has recently released its first-quarter results which, in my opinion, show that the shale oil producer has started to deliver on its promises.

Pioneer Natural Resources posted a 6.9% year-over-year increase in production for the first quarter to 333,430 boe per day, led by a 13% increase in oil sales to 206,256 bpd. This includes 320,000 boe per day of total production and 203,000 bpd of oil production from the Permian Basin. The company’s average oil price, however, dropped by 20% from a year earlier to $49.38 a barrel. Pioneer Natural Resources, however, surprised Wall Street by posting a profit of $1.83 per share which was not only ahead of analysts’ consensus estimate of $1.65 per share but also higher than the Q1 2018 profit of $1.66 per share. 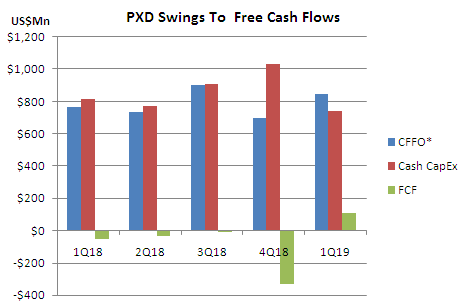 However, I think the highlight of the company’s quarterly results was that it finally swung to free cash flows after burning cash in the previous quarters, as shown in the image above. Pioneer Natural Resources generated $849 million of cash flow from operations, before changes in working capital, in the first quarter which fully covered the cash capital expenditures of $741 million. As a result, the company ended the period with $108 million of free cash flows ($849 million-$741 million).

In adjusted terms, Pioneer Natural Resources generated $868 million of discretionary cash flows which also fully funded the drilling, completion, and facilities CapEx of $831 million, leading to free cash flows of $37 million. However, Pioneer’s total capital expenditure was $928 million (including gas processing and water infrastructure capital) wasn’t fully covered by the company’s operating cash flows. But in my view, Pioneer has considerably improved its cash flows profile in the last few quarters (as evident from the image above) and the company will only get better in the future. 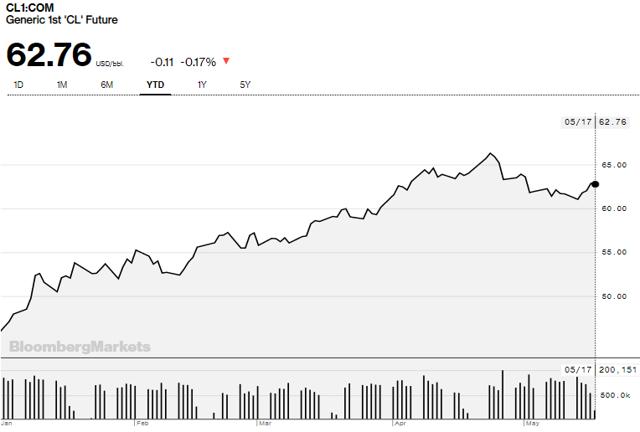 In the short term, Pioneer will benefit from improvement in oil prices. The price of the US benchmark WTI crude has gradually increased from less than $50 a barrel at the start of the year to $63 at the time of this writing. The gain has been driven in large part by tight supplies. Although output from the US has climbed to more than 12 million barrels per day, oil exports from Iran and Venezuela have fallen after the US imposed sanctions. Meanwhile, the Organization of the Petroleum Exporting Countries and its partners, including Russia, has been keeping a lid on oil volumes to comply with the production freeze agreement. On the other hand, the outlook for global oil demand has worsened but the commodity’s consumption is still forecasted to climb by 1.3 million bpd in 2019, up from 1.2 million bpd in 2018, as per International Energy Agency’s prediction. These factors have kept oil above $60 since late-March and I think prices could remain higher than the first quarter average of $55 throughout the rest of the year, particularly as OPEC keeps cutting output and the US also witnesses a slowdown in production growth.

There’s been a step change in the mindset of the US oil producers. Companies who once aggressively targeted production growth are tapering down their future plans and are now focusing on generating free cash flows. Pioneer Natural Resources itself has slashed its long-term growth target from an average of 20% per year to mid-teens as it prioritizes free cash flows. The company no longer aims to increase volumes to a million boe per day by 2026. It now expects to deliver 12% to 17% growth in Permian Basin volumes in 2019 and hasn’t given any specific forecast for the long-term. Other oil producers are also exercising restraint and the US production growth has slowed down. The US crude production which soared at a record annual pace of more than 2 million bpd before oil plunged in the fourth quarter of 2018 is now forecasted to grow by 1.4 million bpd in 2019 and 0.7 million bpd in 2020, as per the EIA. This deceleration has also helped push WTI higher.

The increase in oil prices from an average of less than $55 a barrel in the first quarter to more than $60 should lift Pioneer’s earnings and operating cash flows. The company has now shown that it can generate excess cash at $50 oil and the higher oil price should expand free cash flows. Although Pioneer couldn’t generate enough cash flows from operations to cover all of its capital expenditure in the first quarter (as indicated earlier), it will likely be successful in doing that in the second quarter.

Moreover, Pioneer has taken a number of self-help measures that should improve its cost structure and profitability while making it easier to consistently deliver strong levels of free cash flows in the future. The company is restructuring by removing the layers of management to make the organization more efficient and save up to $100 million in annual general and administrative costs. This bolsters the company’s ongoing capital efficiency initiatives through which it has already achieved more than $300 million of annualized savings, including midstream, facilities, sand, and gel savings. By reducing G&A costs, the company is now looking to save $400 million on an annualized basis in 2019-20. 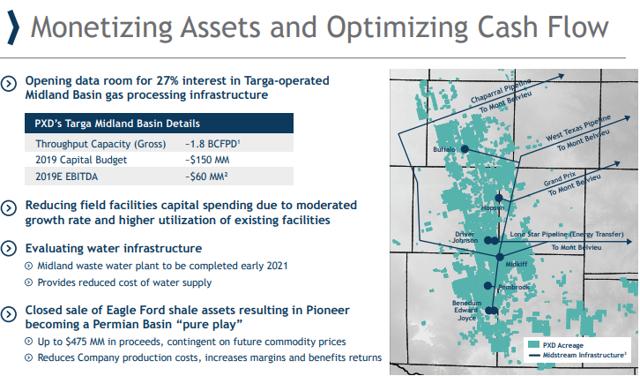 Pioneer is also selling its non-core and low-margin assets which will allow it to increase its focus on the high-margin Permian Basin properties while shoring up the company’s liquidity. It recently announced the sale of its Eagle Ford shale properties for up to $475 million (contingent on future commodity prices) for which it has received $25 million and will get the remainder during 2023-25. The company is also looking at options to monetize those assets in the Permian Basin which it does not plan to develop in the near-term and I believe it will likely rely on a DrillCo agreement instead of a cash/stock sale. Pioneer also plans to sell its 27% interest in the gas processing plant operated by Targa Resources (TRGP) in the Permian Basin. In the long-run, Pioneer can also divest the water infrastructure asset on which it has already spent more than $1 billion. These measures can also lift the company’s profit margins, reduce cash flow breakeven level, and enhance free cash flows.

Additionally, Pioneer will also face lower capital expenditure requirements after cutting its future growth targets from 20% to mid-teens and disposing of non-core assets. This could result in CapEx savings in the future which augments the company’s free cash flow outlook (since FCF equals Op. Cash Flow minus CapEx).

For these reasons, Pioneer Natural Resources is well positioned to continue growing free cash flows in the future. A number of oil producers are currently mainly using the free cash flows for debt reduction purposes and on shareholder-friendly measures. Pioneer, however, carries the strongest balance sheet among all large-cap independents. At the end of the first quarter, the company had just $2.28 billion of debt, with no significant (>$1 billion) near-term maturities, which translates into a debt-to-equity ratio of 18.7% - the lowest among large-cap independents. Pioneer doesn’t have any debt problem which means that it can return a vast majority of the excess cash to shareholders as dividends and buybacks.

Pioneer is currently working on a $2 billion repurchase program of which it has spent $328 million. This means that it will continue buying a ton of stock in the coming quarters. It has also promised to increase the dividend to around a 1% yield which implies that Pioneer will grow annual dividends by 140% from $0.64 to $1.54 per share. In the near-term, I think buybacks will remain the primary method of returning capital to shareholders. I expect dividends and share repurchases to be powered largely by free cash flows and liquidity.

Pioneer Natural Resources stock has climbed by 17.3% this year. If the company shows strong execution by reporting solid levels of free cash flows in the coming quarters, then its shares will likely continue moving higher. The company’s shares are currently trading 14.65-times next year’s consensus earnings estimates, as per data from Thomson Reuters. That’s in-line with the large-cap peer median. At this price, I would rate the stock as a hold.