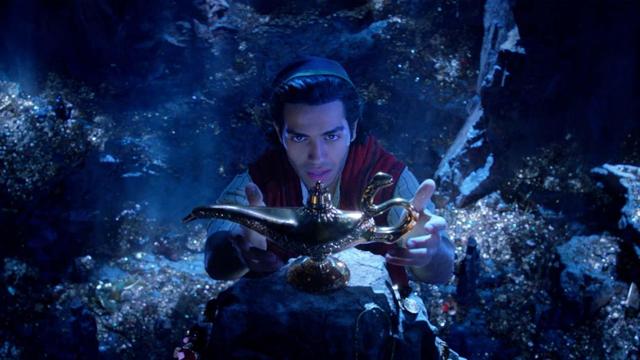 It looks like there was nothing fake about Prince Ali’s reign after all!

Over the long holiday weekend, Disney’s (NYSE:NYSE:DIS) live-action version of Aladdin soared into theaters and despite having the odds seemingly stacked against it, over-delivered. While the success of Aladdin may be good news to Disney and its investors, if you’re a Netflix (NASDAQ:NASDAQ:NFLX) supporter, the news may not be as well received and could only fan the flames around the uncertain future of the streaming juggernaut.

First, as always, some background.

Aladdin was never guaranteed to be a slam dunk with audiences.

While everyone knew Beauty and the Beast was a lock to top the box office, this live-action remake had some red flags attached. For example, audiences were not a fan of Will Smith’s Genie character. When first revealed, the CGI look was much maligned and it caused an uproar – that concern built on the previous uncertainty of making a film with a cast of unknowns (in addition to Smith). Throw in unflattering reviews and you can see why the odds were stacked against the movie.

And if all that wasn’t enough, Disney was still trying to combat what was seen as a Memorial Day curse. Investors were keenly aware of the problem the House of Mouse has had in this slot the last few years. As I mentioned prior over the past few years we’ve seen Tomorrowland outsmart itself, audiences reject an Alice In Wonderland sequel they never asked for (despite the original pre-dating Cinderella as proof of concept about live action success), Pirates of the Caribbean begin to age and Solo: A Star Wars Story usher in Star Wars overload.

However, despite that all being sound concerns and reality-based possibilities, none of it mattered. Aladdin is looking at $90 million three-day frame and a $113 million haul over the four-day weekend. To put that into comparison, Aladdin has now matched the entire run of Disney’s last animated-to-live-action remake (Dumbo) in one weekend.

Analysts began to see the tide was turning in Disney’s favor after a $7 million gross in Thursday night showings and the power never faded. The movie just kept going and going, defying the odds at every turn. Yet while there is no doubt that Disney’s promotional machine was well oiled here, another factor came into play and that is pure nostalgia.

Aladdin succeeded because adults remembered how much they loved the original and in addition to wanting to see the remake, they wanted to share that with their kids. Combined with a sizable Disney push, the film captured the attention of all demos.

And if you’re a Netflix investor – you likely noticed.

The truth is Aladdin’s success should be scary if you’re a Netflix booster because it really showcases the power behind the brand that is making a play to be the new leader in streaming.

As Deadline points out Disney never had a concern about attracting women to the movie, the company did worry about men showing up. So Disney pushed Aladdin hard during sporting events – specifically ones on platforms it owned. That includes ESPN and ABC where the trailer got play during NCAA March Madness coverage and the NFL Draft.

Then take into account working with ABC on doing promos and stunts during its top programming AS WELL AS on cable sibling Freeform… and that’s not even counting the full court Aladdin received off of the Disney Channel and through Disney Cruise lines.

And all of that was just through synergistic ventures -Disney also spread its buys to CBS during the Grammys, Fox (pre-merger) during a high-profile NFL game and in front of movies like Bohemian Rhapsody and Warner Bros.’ Shazam… of course, it was also shown in front of the Disney-backed Avengers, but you get the point.

The result speaks for itself – Aladdin went from a possible disaster to a Memorial Day record breaker - that’s the power of Disney, which leads me to this fall’s launch of Disney+. As I’ve written prior Disney is not playing games here, the studio didn’t pull the same fake-out Google (GOOGL) (GOOG) and Apple (AAPL) did with its recent reveals – executives came out and said “you can buy this service for this much on this date and here’s what it will offer.”

And that takes us back to the other half of the Aladdin equation – nostalgia.

Disney is now so much more than Mickey, Minnie, Donald and friends – it’s also Pixar, Marvel, Star Wars, ABC, Freeform, ESPN, Nat Geo and as of this year powerhouses like The Simpsons and Modern Family are now Disney-owned properties. And all of that content will likely make its way onto Disney+ in the first few years of its existence - many likely at launch.

Did I forget to mention the company’s now much larger share of Hulu?

Netflix investors knew that the Disney deal was going to mean a sizable amount of content coming off the platform, but while in the past that hasn’t been a big deal, now it may be a more glaring problem. According a new report by The Hollywood Reporter/Morning Consult, Disney could potentially cost Netflix 30% of its user base – on its own that is a staggering number, but not as staggering as when combined by another aspect of the poll that says 49% of young viewers would cancel Netflix if the streamer lost key programs – many of which are not Disney-owned.

That means that if you take the 30% estimated to leave with Disney+ launches and then factor on top of that even just a fraction of the 49% (accounting for overlap) that say they’ll jump if their favorite programs leave, then you could potentially be looking at Netflix losing an even larger part of its base.

Now let’s be honest – saying you are quitting a service like Netflix and actually doing it are two entirely different things and in fairness that same poll quotes experts that don't believe this threat will have devastating effects.

They could very well be right, remember, people always say they are quitting Netflix after a price hike, but few enough actually do that it makes a difference. To me personally though, this is a different scenario because it’s not just one thing, it’s a bunch of things.

It’s Disney programming – but it’s also The Office, Friends, Parks & Recreation, The West Wing, basically every show that ever been on NBC. Half of those shows will go to WarnerMedia’s new platform and the other half will go to NBC’s new platform, both of which still haven’t revealed much if any info – but they’ve made their intentions clear.

The problem here is more the unknown. We've never seen Netflix stand to lose this much content to rivals over the next few years, so we don't know how the public will react. Just as people have threatened to leave over price hikes, studios have threatened to pull content but then cut last minute deals for brief extensions.

This time though there is a different feel, especially with Disney.

This company may be the biggest opponent Netflix has faced and the first one that has the same promotional machine armed and at the ready.

Not to take anything away from Amazon (AMZN), as it is incredibly impressive what it has built in a short time period, but Disney is Disney and it has built an empire on IP – especially in recent years under the guidance of Bob Iger.

Netflix built its service on the success of other series – but the company did so fully well knowing someday that content was going to go away and it would need its own to keep them afloat. That day may be coming sooner than investors thought and I say that to remind investors to never get too comfortable just assuming a company can weather any storm – we’ve seen bubbles burst before and it will happen again someday.

Obviously it won’t be tomorrow, but despite being a global phenomenon Netflix can’t keep that type of momentum up for all of time and is foolish to think otherwise.

There’s a lot more here to unpack and discuss because this month’s upfront presentations of the broadcast networks also ratcheted up the rhetoric but that’s a whole other story that I’ll cover soon.

To read that one and others make sure to hit subscribe.

In the meantime, if you’re a Netflix subscriber, hold onto your magic carpet because the ride could get considerably bumpier in the fall.

The Entertainment Oracle
3.42K Followers
A long time entertainment industry professional, I have worked with a number of top Hollywood studios and networks. With over a decade in the field I use my in-depth knowledge of film and television to inform potential investors about the viability of the many upcoming projects in the industry. Questions? E-mail me at TheEntertainmentOracle[at]gmail.com.
Follow