American Tower is one of the largest global cell tower REITs, operating a portfolio with over 170,000 communication sites. They have over 40,000 macro towers, which will put them in a good position to capture the 5G evolution. As the world makes this shift from 4G into 5G, cell tower REITs stand to gain tremendous strength. In order to move forward with further 5G development, there has to be more cell tower densification, which will spur growth for companies like American Tower and Crown Castle (CCI). 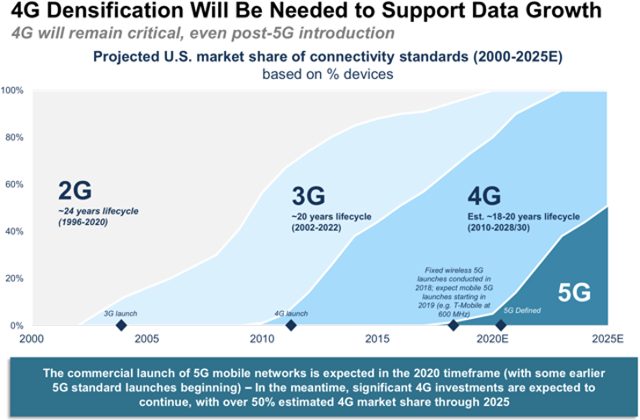 American Tower earns 98% of their revenue from leasing out their properties, which includes the tower structure and the land parcel. The company has the existing capacity to add more tenants to their towers, without increasing costs, which will be extremely beneficial as they continue to grow in the advent of 5G and other opportunities. They appear to be overvalued right now, but have a strong dividend growth opportunity.

AMT acquired the exclusive rights to lease and operate over 10k communication towers for Verizon back in 2015. Those towers had a tenancy of 1.4 tenants per tower, leaving them under half capacity, with max tenancy at 3 tenants. There is plenty of room to add more tenants in the future, spurring capital returns and growth. 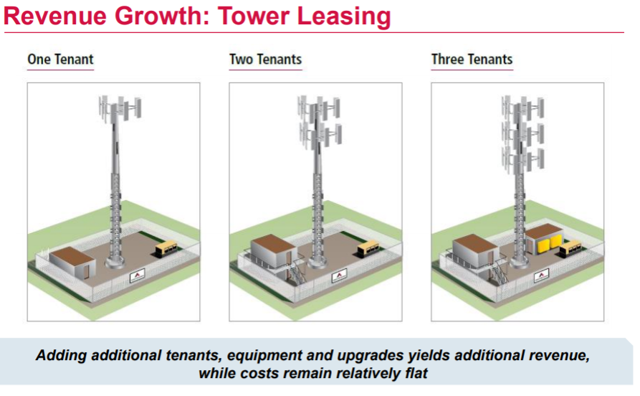 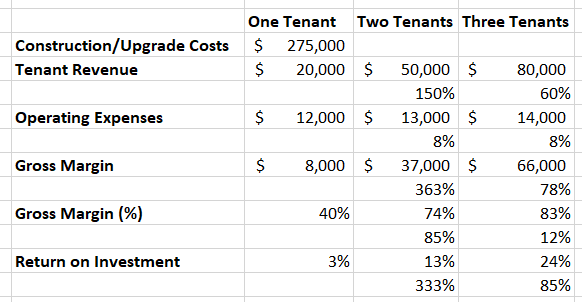 AMT has properties dispersed throughout the world, with 51.4% of their property revenue coming from the United States. 20.7% of their revenue comes from Asia, 17% comes from Latin America, and 9.2% comes from EMEA. They are tilted towards the US, but their foreign investment flows are expected to increase into the future, especially as wireless markets become more accessible abroad. 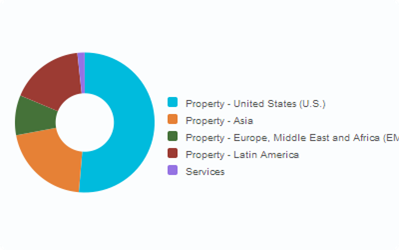 AMT grows abroad primarily through acquisitions, which enables them to take on the operating efficiencies and existing facilities of another group. It also reduces the risk that comes with building out their own infrastructure and clientele base. They acquired majority stake in ATC, an India-based telecom back in October of 2018, and over 700 towers from Telkom Kenya in May of 2018.

I wrote extensively on the fundamentals of 5G in a previous article, and recommended that investors look into Crown Castle International Corporation to get exposure to small cell investments. CCI specializes in fiber-fed small cells, so it's a good way to invest into the domestic 5G market.

However, AMT has a combination of international reach and 5G exposure, which should benefit them as 5G grows into the future. Having access to domestic markets is beneficial in the first stages of 5G, but AMT should be able to benefit from the international trickle-down of the technology in the coming years.

For that reason, AMT is a great company to purchase to get exposure to emerging markets. The company is located in Costa Rica, Ghana, India, Brazil, and Mexico, among other countries, which should experience substantial growth in their wireless markets in the next few years. 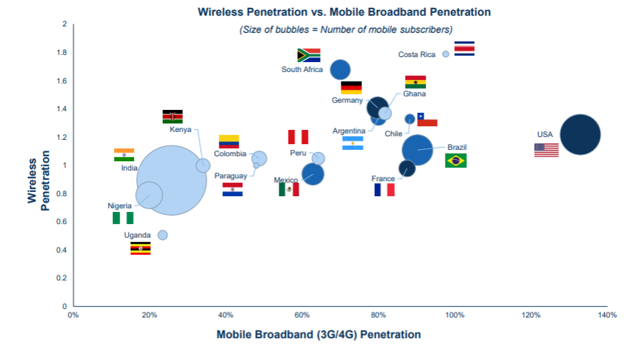 The company has key relationships with groups like Claro, Telefonica, Vodafone, and MTN. They are specifically focused on India and Brazil, where Vodafone composes 7% of their revenue base, and Telefonica composes 4%.

It costs less for the company to build towers abroad, especially in Asia. That leaves room for a higher return on investment, providing up to a 32% ROI in Asia and Latin America when the tower reaches full capacity. They also have a 22% CAGR on their global site count over the past ten years.

Domestically, if the Sprint and T-Mobile merger goes through, that limits the already limited number of customers that cell towers serve. It shouldn’t have a tremendous impact on revenue growth in the short-term, but it could serve as a long-term hindrance to growth.

AMT is the most protected in the case that the merger does go through, with only ~3% revenue overlap between T-Mobile and Sprint on their towers. They also have the lowest revenue exposure to both T-Mobile and Sprint, as compared to CCI and SBAC.

AMT does face competition from Crown Castle (CCI) and SBA Communications (SBAC). Cell tower ownership is tightly concentrated across these three key players. SBA and AMT have an international reach, with a focus on macro towers, whereas CCI is a "pure-play US operator", focusing on fiber and small cell networks.

The industry itself has high barriers to entry, as gaining access to the land and navigating regulations are difficult. The ability of a disruptor to enter this industry is low. The cell towers stand to gain from an increase in mobile data demand, the growth of 5G, their relative triopoly over the network carriers, as well as available international opportunities in emerging markets.

A disruptor might not be able to build out cell towers, but there is the risk that cell towers become obsolete in the coming years. Technological innovation is difficult to predict. Small cell networks, which CCI has exposure to, could work to reduce the importance that cell towers serve in the expansion of the 5G network. However, it is expected that cell towers will be important abroad, and domestically, for a while longer. 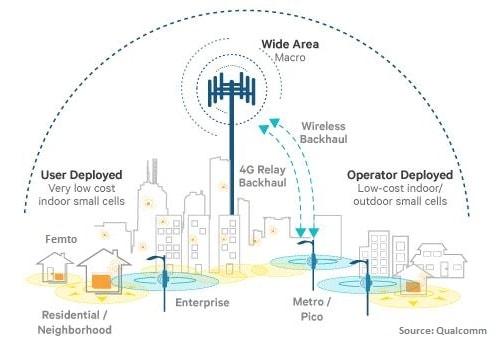 AMT has outperformed CCI and SBAC on a 1-year and a 5-year basis. The REIT has posted a 42% return over the past year, as compared to the 29% return and 23% return for SBAC and CCI, respectively.

AMT has strong cash flows, posting a 28.1% year-over-year increase in operating cash flows into 2018. They have experienced positive increases in cash flows for the past 4 years, which means that their underlying business is able to generate income.

With regards to credit health, AMT is relatively strong. They have strong operational metrics, but both their solvency and liquidity metrics could use improvement. Overall, they are above average, which is good for a REIT.

AMT has a strong gross profit margin at 70.7%. The whole industry has an average gross profit margin of 70.3%, further highlighting the pricing power that the cell towers have. AMT’s net income margin is at 16.6%, which is the top out of the three competitors.

AMT also has the strongest profitability metrics, with a 5.2% ROA, 6.1% ROIC, and 17% ROE. The company has been able to increase their profitability metrics across the board since 2014 as well, whereas CCI has experienced a contraction over the same time frame. AMT has been able to increase these metrics even as they’ve built out their site counts, as well as increasing their dividends, which shows strong capital allocation decisions. 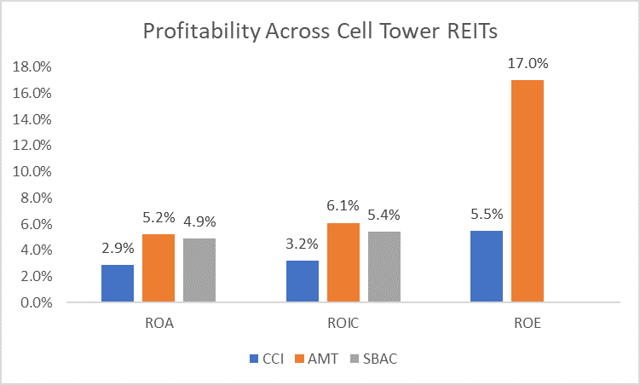 It will be important for AMT to stay on top of the 5G trend, and deploy the necessary resources in order to capitalize upon that. Seeking out an expanded clientele base beyond network carriers will allow them to diversify against the risk that 5G time frame takes longer than expected, as well as against other disruptors, like small cell networks.

There are a lot of network opportunities that the cell towers can break into, including edge computing, AR/VR, and autonomous vehicle networks. All of those are within the realm of 5G, but AMT should consider exploring those innovations as stand alone entities as well, in order to capture the total available market.

Most analysts have a price target of $200.5 for the company, which is right around what it is currently trading at. I believe that AMT is a good investment, but they do appear to be slightly overvalued, trading 50% above their 52-week low of $134.87. When the company trades back down below $197.11, that might be a better time to purchase.

Based on EV/EBITDA metrics, the company is one of the most expensively traded global tower REITs in the market. However, based on their past performance and future opportunities, they have the ability to sustain growth into the future. For long term investors, the company is reasonably priced, especially considering their dividend growth.

However, if investors want to diversify their investment options, the Real Estate Select Sector SPDR ETF (XLRE) has 11% exposure to AMT, along with other cell tower REITs. The ETF has a 9.54% estimated EPS growth and a 3.25% dividend yield.