Cavco Industries, Inc. (NASDAQ:NASDAQ:CVCO) is a profitable company with a history of strong growth. The company produces manufactured homes and the current housing shortage in the U.S. is giving the company a growth boost. The stock is reasonably priced based on its earnings potential and I think it would make a solid long-term investment.

The balance shows that the company operates with low debt levels. The long-term debt is currently $14.6 million representing only 2% of its total asset value. The company’s total liabilities represent only 27% of its total asset value. I personally prefer low debt levels as this allows the company to pursue any capital expenditure plans they may have without loading the balance sheet with excessive debt. The reason I don’t like high debt levels is that the bankruptcy risk increases. This is because companies with high debt levels find it difficult to meet their financial obligations such as paying bills.

As the above chart shows, Cavco Industries’ revenue has shown consistent growth over the last decade and the forecasts show this trend continuing into the 2021/03 fiscal year. The company’s earnings have broadly increased over the years and are expected to continue increasing into 2021/03.

Management has stated that they have increased the pricing of their manufactured homes which has more than offset the increase in manufacturing costs. The company’s President and CEO, Bill Boor, stated in their latest earnings call,

On the topic of margin growth our plants have done a very good job of increasing price to compensate for input cost increases.

I think that increasing the sale price is the best way to combat rising manufacturing costs and maintain margins. However, companies are not always able to increase their sales prices as customers may turn to the competition. There’s no point in increasing prices if no one is willing to pay the higher price. In this case, I think Cavco Industries’ price increase was readily accepted due to the current housing shortage in the United States.

Cavco is very well positioned to play an important part in addressing the shortage of affordable housing in our country.

While Cavco Industries’ has largely produced organic growth, management is remaining open to the possibility of more acquisitions in the future, with the company’s CEO stating,

We'll stay alert for acquisition opportunities that further strengthen the company's ability to serve our dealers and community partners and contribute to the solution to the country's affordable housing shortage.

It’s commonly accepted that a stock is fairly valued when its forward PEG is 1.0 which means that Teleflex is slightly overvalued with a stock price of $156. Its fair value would be around $120.

A forward PEG of 1.3 is cheap for a growth stock as they often have forward PEG ratios above 2.

As an active investor I personally like to determine some likely price targets. This gives me a feel for how high the stock price could go in the short term and how soon it could get there. 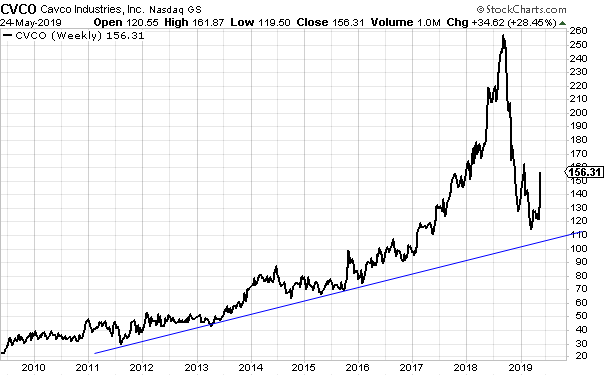 Over the last decade Cavco Industries’ stock price surged higher from 2017 and peaked in late 2018. The stock then pulled back hard as it declined while the stock market pulled back from its high. The decline has brought the stock price back down to the trend-line that formed prior to its surge higher.

While the 2018 price plunge seems severe and can be blamed on many factors, the fact is that the stock first surged higher without any justifiable fundamentals (beyond the existing housing shortage which began in 2008) and simply reached an overbought condition with high valuations. The subsequent plunge was really nothing more than a correction to bring the stock price back to its trend-line. The plunge itself was triggered by the pullback in the market indices and nothing fundamentally has changed (the state of the housing market hasn't changed). Sure there’s going to be a lot of unhappy investors who bought into the surge, but that’s the risk of buying into a strong rally.

Cavco Industries is a profitable company that has produced solid growth over the last decade. The company produces manufactured homes and is in a position to capitalize on the current housing shortage in the United States. The housing shortage allows the company to easily increase its pricing which more than offsets their rising manufacturing costs. Cavco Industries’ growth has been largely produced organically, but management remains open to future acquisitions.

Kurt Pollet
671 Followers
Kurt Pollet has been involved in the stock market since 1986 and this long-term experience provides a broad perspective of the stock market and its performance. He operates the website stockinvesting.today and produces a newsletter that provides market analysis, strategies and stock picks.

Disclosure: I am/we are long CVCO. I wrote this article myself, and it expresses my own opinions. I am not receiving compensation for it (other than from Seeking Alpha). I have no business relationship with any company whose stock is mentioned in this article.