Amazon (NASDAQ:AMZN) has started offering to book airline tickets from its platform. This service has been launched in collaboration with ClearTrip in India. Amazon is also offering healthy discounts of up to INR 2000 (approx. $30) if customers book domestic flights from its platform. Amazon Pay offers other services in this region like payment of mobile, cable, utilities, gift cards, etc.

This service will allow the company to stand out in a very crowded digital wallet industry. There are other big players like Google (GOOG) (GOOGL), Walmart (WMT) and Paytm who are trying to increase their market share. Amazon's biggest advantage within the Indian market is its Prime offering which is offered at INR 999/year (approx. $15/year).

We could see a rollout of this service to other regions in the next few quarters. This should increase the transactions on Amazon's platform and give the company an opportunity to enter several new segments.

Amazon's entry in the flight booking segment in India will rattle a number of local players. One of the biggest players is MakeMyTrip (MMYT) with a market cap of $2.5 billion. MMYT is backed by Booking. Amazon can easily offer bigger discounts to grab a sizable chunk of this segment. 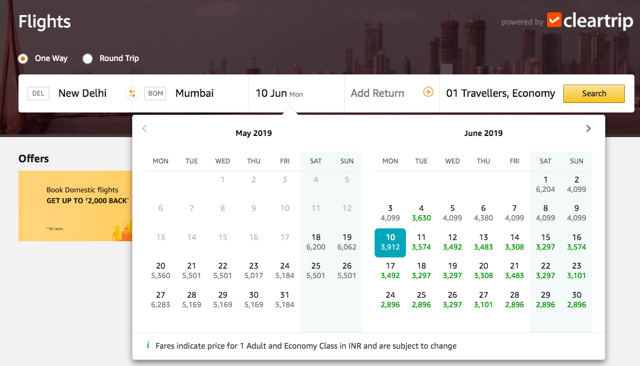 Amazon has invested heavily to expand its Amazon Pay option in India. In 2018, the company invested a total of INR 12.5 billion ($170 million) in Amazon Pay division of India. Having a big market share in the digital wallet industry provides a halo effect for all the services provided by Amazon.

Walmart had acquired Flipkart in 2018. It is now investing heavily in the digital wallet PhonePe. Google Pay is also ramping up its investments in this region. Besides these players, there is Paytm which is the market leader.

Alibaba and Softbank have a big stake in Paytm. Last year, Buffet also invested $400 million in this company at a valuation of $10 billion. Paytm has the largest network among small scale merchants which has increased the popularity of the app in terms of transactions. Paytm is also investing to grow its retail segment called Paytm Mall.

However, Amazon has a good share of the e-commerce segment in India. This should allow the company to increase the transactions using Amazon Pay. Amazon has kept the price of its Prime membership quite low. It is available at only INR999 ($15/year). Most of the benefits of Prime are front-loaded which means they are similar to those offered in the domestic US market. Amazon's continuous investment in video segment should help the company attract more users to its Prime membership in this region.

Amazon is trying to convert its platform into a single-stop shop for a number of different services. This is the same strategy used by Alibaba (BABA) and Tencent in China. The availability of flight booking would be a big positive for Amazon Pay for a number of reasons.

Amazon would be able to attract a higher income customer base who can be given Prime-only discounts. The growth rate in domestic air traffic of India has been in double-digits for the past few years. Hence, this service increases the addressable market for Amazon Pay and makes the wallet service more competitive compared to other players.

Amazon has been in the Indian region since 2013. It has managed to show decent growth in this region and is now showing almost similar sales compared to Walmart's Flipkart. In a recent report, Barclays estimated that both the e-commerce players have a Gross Merchandise Value, GMV, run rate of $11.2 billion for fiscal 2019. This is the fastest rate that Amazon has crossed the $10 billion GMV level in any region. Walmart has also mentioned in the recent earnings report that it is investing heavily in Flipkart.

There are still several challenges in this region for Amazon. This includes growth of Flipkart and regulatory hurdles. However, if the company can launch new services and attract more customers to Prime membership, it will have a good moat in this region. Walmart bought its majority stake in Flipkart by investing $17 billion. Amazon has a number of advantages over Flipkart. These include Prime membership, AWS in India, advertising and higher growth. Amazon's delivery network and shipping capabilities also offer better user experience.

If Amazon can increase its market share in e-commerce and build a good Prime membership base in India, we should see better valuation for its business in this region. This should certainly help in improving the bullish sentiment towards the stock.

Amazon can also enter new travel segments like hotel booking and vacation trips through third-party operators. Alibaba has followed a similar approach in China which has improved the transactions on Alibaba's platform.

Amazon has started offering flight booking from within its platform in India. Heavy discounts for this service should attract more users to Amazon Pay. It will also allow the company to distinguish its wallet from other competitors. Amazon's Prime membership base is also a big advantage for the company in this region. On a GMV basis, Amazon is close to Flipkart.

Successful reception of flight booking in India should allow Amazon to try this service in other regions also. It will improve the long term growth prospect of the company in this region and increase the growth runway for the next few years.

Bluesea Research
6.51K Followers
I have worked in the technology sector for over 4 years. This included working with industry stalwarts like IBM. I have done my MBA in finance and have been covering various blue chip stocks for the past 6 years. Having hands-on knowledge in the technology sector has helped me gain valuable insights into the ups and downs of this sector and predict winners and losers more accurately.

Disclosure: I am/we are long AMZN, SAVE. I wrote this article myself, and it expresses my own opinions. I am not receiving compensation for it (other than from Seeking Alpha). I have no business relationship with any company whose stock is mentioned in this article.