Zillow (NASDAQ:Z) has been in the business of providing real estate professionals (“REPs”) with lead generation and other marketing solutions. On the flip side, the platform has allowed homeowners to obtain Zestimates, forecast mortgage payments, and discover new homes.

In 2017, Zillow piloted their Instant Offers program, which has since changed to Zillow Offers. The new segment allows homeowners to sell their homes to Zillow for cash. Zillow then turns around, and sells the home on the open market. There are plenty of questions regarding the viability of the business model, how lucrative the opportunity is, and the risks which come with it.

We believe the demand for such a service is currently underappreciated, and believe Zillow is one of the best-positioned companies to capitalize on the opportunity. As the process is refined, we believe adoption of this new transaction method stands to accelerate.

Going forward, we can envision a world where Zillow has successfully streamlined the home buying and selling process, capturing a healthy portion of home transaction value in the U.S. After factoring in risks, which we see as manageable, we believe the upside is much greater than the downside, making a potential investment attractive to us.

Zillow: Popular Among the Public 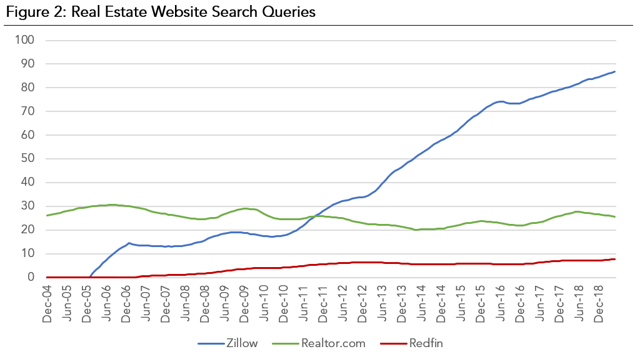 As you can see, since Zillow’s inception in 2004, their popularity has risen considerably. Other firms, such as Redfin and Trulia (a Zillow subsidiary), are trailing behind when it comes to user search queries on the internet.

When it comes to customer demand, a look at the firm’s revenue speaks for their success. Total revenue has grown at an average rate of 64% per year since 2009, totaling over $1.3 billion in 2018. Zillow generates revenue by providing advertising and lead generation for REPs.

For quite some time now, we have seen the middleman being cut out of the equation as certain industries undergo digitization. The digitization of real estate transactions have been a hot topic for some time. Zillow, through Zillow Offers, is attempting to break into this space. Leveraging their extensive network of housing data, they have begun to purchase homes from sellers, polish the homes up, and then resell the homes on the open market – akin to a market maker.

Since its launch, the service has received some criticism (more on this later), although the numbers show there is some willingness on the homeowner’s behalf to try out this transaction method. In the same press release, it was noted that Zillow Offers has been seeing demand which represents over $200 million in transaction value per day. On an annualized basis, this would equate to ~$73 billion in transaction value – just over 4% of the country’s home transaction value in 2018. This would also reflect total purchase volume of over 280,000 homes per year (23,000 per month).

It’s clear that Zillow Offers is garnering interest among homeowners, although whether their business model is viable on a large scale is questionable in the eyes of many. After all, cutting out real estate agents would essentially kill their current business - this is where things get tricky.

On top of this, another big question is: how would such a conservative industry undergo digitization? Ben Thompson, from Stratechery, highlighted the various factors home buyers and sellers would be considering prior to a transaction taking place. Thompson notes that for individuals, these transactions are rare – many would be willing to deal with the hassle since they’re likely only doing it a handful of times in their life. Additionally, buying a home is typically the largest transaction an individual will be involved in throughout their life, making them less willing to go down an unconventional route.

Looking back in history, an interesting example of an industry undergoing digitization is the securities industry itself. Previously, investors would have to call up their broker to place a trade. Today, investors are largely reliant on digital solutions, which has made the exchange of securities much more efficient and affordable.

From around 1980 to 2003, trading costs in the U.S. declined by over 80% - throughout this same period, trading volume on the NYSE skyrocketed. Today, investors can place trades in select stocks at no cost through platforms like Robinhood.

As a result, many people have been questioning whether real estate could follow suit. Typically, when buying or selling a home, transactions costs are ~6% - a 3% commission goes to the buyer’s representative, and a 3% commission goes to the seller’s representative. (There are other costs, but we’ll focus on the brokerage fees for now.) This has been the case for quite some time, and as home values fluctuate, so do transaction costs (on a dollar basis).

Should digitization take over, the transaction fees previously charged by brokers could end up disappearing. If Zillow is doing most of the buying and selling in the home market, they would benefit from higher margins. Again, this would eliminate the need for a REP, and thus pulling the rug out from underneath their advertising business. Yet if Zillow doesn't do this, it's likely someone else will.

Through Zillow, there is some added value, as opposed to using a traditional broker. The company's purchase offers are in cash, adding a level of stability to the transaction. This seems to be a big determining factor for the homeowner selling their home.

As the business gains traction, friction stands to be reduced. A low-friction process would make the prospect of buying and selling a home with Zillow much more appealing. If an individual can buy or sell a home with fewer headaches, why not go with that option? If Zillow is the big player in the market, then they can command a larger spread. With reduced transaction costs, their margins would again benefit.

With this in mind, let’s look back at the securities industry, where trading costs have declined immensely. As it became cheaper for investors to trade through digitized platforms, they adopted online trading. This then resulted in a flock of competitors, which further pushed down trading costs. Competitors were willing to take on a smaller spread. Today, Fidelity and Charles Schwab are leaders in the space, alongside other large firms like TD Ameritrade.

If lower transaction costs in real estate play out, there would very likely be increased competition. Many players would be okay taking a smaller spread. Yet we believe the capital-intensive nature of this business would be an offsetting factor; in our eyes, a smaller player wouldn’t be able to command a significant portion of the market. So long as Zillow stays on top of the ball, we believe they’ll have enough time to react before competitors get close.

Yet today, sellers have a big issue to deal with - an issue which is hindering the adoption of an internet-based transaction method. Zillow’s purchase offers – in an effort to obtain higher margins, which is understandable – are typically low. Their spreads are currently quite high (6-9%) as a result. If you’ve ever tried to take your car to a dealer and get it appraised, you’ll know what this is like. Sellers who have utilized Zillow Offers often criticize the laundry list of necessary fix-ups provided by Zillow representatives, which knocks off a chunk of the home’s sale price. On top of this, the initial home offers are typically quite low.

For customers, this is not enticing, as they can squeeze out a higher value for their home through the traditional transaction process today. This is an obstacle Zillow will have to overcome, which could result in tighter spreads. Yet from the numbers Zillow pushes out, it seems like sellers are okay with the trade-off, and are open to the concept despite the higher costs. 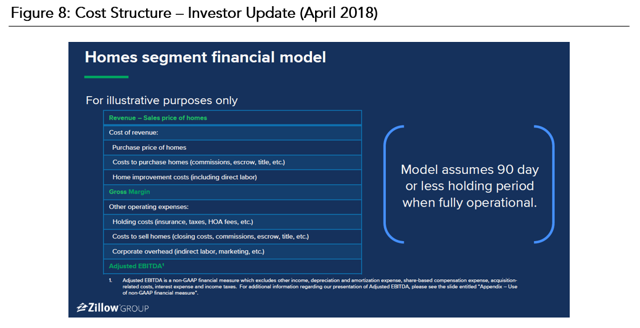 In their investor update presentation, they note brokerage commissions as a line item on both sides of the transaction process (purchase & sale). Optimization of the transaction process could eliminate these costs, as mentioned. Even hiring in-house personnel could help (think of Intuit and in-house CPAs). With these commissions equating to ~6% of the home’s sale price, this would be an ideal line item to reduce.

In their 1Q19 shareholder letter, management broke down the unit economics of a Zillow Homes transaction. What’s impressive is the sizable spread Zillow is taking per unit acquired. That is, there’s a spread of ~9% between the sale price and purchase price. It’s unclear whether the home acquisition cost includes commissions on the buyers' side, which would shave off 3% and reflect a ~6% spread. Regardless, a spread of 6-9% is still impressive in our eyes.

The second largest expenditure is selling costs, which we believe also includes agent commissions (seller’s side) of ~3%. Total selling costs per unit are ~4.3% of sales. This is followed by renovation costs, which come in at 3.6%, and holding costs (HOA fees, insurance, taxes, etc.) which total ~1% of sales. At the moment, margins may appear low, but the top-line opportunity is quite massive.

Kill Or Be Killed: Competition Heating Up

Zillow is undoubtedly a key figure in the space, with a considerable advantage given its vast network of housing data. That’s not to say that there isn’t competition. Just this past March, OpenDoor – a company in the same business as Zillow Offers – raised $300 million in a fundraising round, valuing the company at $3.8 billion. Other players in the space include Compass and Knock.

Should homeowners adopt an internet-based method of home buying and selling, Zillow holds a good chance of absorbing a sizable share of these transaction costs. Today, transaction costs through Zillow Offers is higher than the industry standard 6% commission. There are benefits, although these are weighed by users on a case by case basis.

Investors could also see the space split among various online brokerages, similar to the way Fidelity and Schwab make up a significant share of stock transactions today.

In any event, we think the capital-intensive nature of the business is likely to keep small players small. In some ways, this could be Zillow’s moat going forward – i.e., there aren’t a lot of companies with enough cash on hand to facilitate $200 million in home transaction value per day. Unless competitors have a differentiated offering, it could be hard for them to obtain funding to go head-to-head with an incumbent like Zillow.

In the letter, they break out their 3 to 5-year goals, which includes purchasing 5,000 homes per month (60,000 annualized). This is well within the demand they’ve already been seeing.

The strongest gains would come in the later stages of the business's development, as the process is refined, costs are whittled down, and revenue grows stronger.

Disclosure: I/we have no positions in any stocks mentioned, but may initiate a long position in Z over the next 72 hours. I wrote this article myself, and it expresses my own opinions. I am not receiving compensation for it (other than from Seeking Alpha). I have no business relationship with any company whose stock is mentioned in this article.