Now that the Memorial Day holiday weekend has come and gone, and the end of May will come to an end on Friday, the old adage for the stock market, "sell in May and go away," could have special meaning in 2019.

A relaxing summer without excessive risk could be a good idea considering all of the issues facing markets. School is now ending for the kids, and it will not be long before the weather starts heating up.

While it is looking like the stock market is going to suffer another correction, time will tell if a move to the downside is milder, similar, or worse than the price action during the final three months of 2018. However, if history is a guide, stocks will eventually find a bottom, and it could be ugly, from which they will rise from the ashes to higher highs. Meanwhile, it is starting to look like selling on the first day of May and going away would have been the optimal approach to the stock market.

If we are heading for a rough period of downside turbulence in the stock market, the VIX index is likely to rise which could make the ProShares VIX Short-Term Futures ETF product (BATS:VIXY) a valuable trading tool over the coming weeks and perhaps months.

Stocks reached a high on May 1

The E-Mini S&P 500 June futures contract moved to a new all-time peak on May 1, but on the same day, it put in a pair of ominous trading patterns on the daily chart.

As the daily chart highlights, on May 1, the E-Mini rose to the same high as on September 21, 2018, on the June futures contract at 2961.25 which was a higher high than the previous session. The E-Mini then closed below the prior day's low, putting in a bearish reversal. The stock market has followed through on the downside following both the double top formation and the bearish key reversal. On May 29, the E-Mini was trading around the 2780 level and hit a low at 2766.25, 6.6% below the May 1 peak, and at the lowest level since mid-March. At the same time, the VIX index has moved higher since May 1. 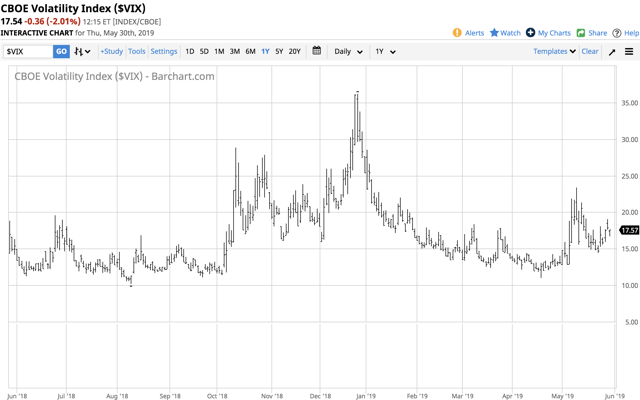 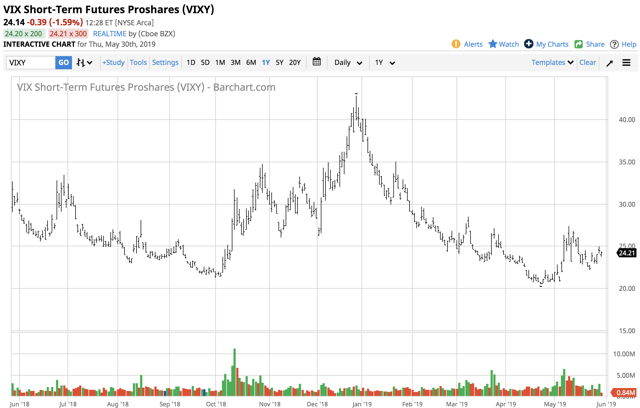 The trade dispute weighed on equities in May

The selloff in stocks during the fourth quarter of 2018 was the result of a fear of increasing interest rates in the US. The Fed hiked the Fed Funds rate by four times for a total of one full percentage point in 2018 which was 25 basis points above its guidance at the start of last year. In Q4 2018, the market remained optimistic over the prospects for a trade deal between the US and China. However, as we head into June, the Fed reversed course for 2019 canceling all short-term rate hikes and told markets they plan to end the program of balance sheet normalization in September 2019 which will take the upward pressure off rates further out along the yield curve.

The selloff that began in early May came as optimism over a trade agreement between the US and China turned to pessimism when negotiations hit a roadblock. The US accused China of backtracking on previously agreed upon issues, and on May 10, President Trump increased tariffs from 10% to 25%. On May 13, China retaliated with protectionist measures on US goods, and the rhetoric has increased between the two nations which have stoked fears of an all-out trade and currency war between the countries with the world's leading GDPs. While the tariffs weigh more on the Chinese than the US economy because of the balance of trade, the pessimism has caused selling in the US and Chinese stocks.

Late June could be a moment of truth for the stock market as the clue will come from Osaka, Japan

The next move in the trade chess game will arrive on June 28 and 29 in Osaka, Japan, at the G20 meeting. President Trump and President Xi will sit down to discuss the issues that have created roadblocks and escalated the trade dispute. Progress and a new beginning when it comes to negotiations will likely cause a return of optimism to markets and lift stock prices, while an unsuccessful summit between the two leaders could cause another leg to the downside in share prices in both China and the US.

The markets will need to wait an entire month for the meeting, and the potential for a continuation of rhetoric between Washington and Beijing as each side postures for the summit could cause bouts of selling in the market and periods of risk-off behavior in other markets across all asset classes. The communiqué from Osaka in late June could be the most significant factor for stocks over the second half of 2019 and determine whether the global economy faces recessionary pressures because of the trade dispute. While most issues divide the Trump administration and the opposition party in control of the House of Representatives and those Senators on the other side of the political aisle, it appears that President Trump has lots of support for a hard-line when it comes to dealing with China on the trade issue.

The Middle East could provide turbulence

Aside from trade, which is the most pressing issue for markets, the increasing tension in the Middle East is another factor which could cause increased price variance in asset prices over the summer of 2019. The US pulled out of the Iran nuclear nonproliferation agreement in 2018, and in April, ended exemptions on eight countries that purchase crude oil from the Iranians. The leadership in Tehran had told the world that any sanctions that prevent the nation from selling their petroleum to customers around the globe would cause them to prevent other exporting countries in the region from shipping crude oil. The Strait of Hormuz is a narrow passageway that separates the Persian Gulf from the Gulf of Oman and borders on Iran. May's sabotage attacks on a handful of oil tankers off the UAE near the Strait and a drone attack on a Saudi pipeline near Riyadh that appeared to come from Yemen are signs that the Iranians are putting their threats into actions. The proxy war between Iran and Saudi Arabia in Yemen continues to rage.

In response to Iranian threats of provocation, the US dispatches the USS Abraham Lincoln to the region to protect US interest and allies in the region. Moreover, the US military presence is there to make sure that crude oil continues to flow from exporting countries in the area. The US declared that all members of Iran's Revolutionary Guard are terrorists, and the theocracy in Tehran responded saying that all US troops in the Middle East are the same.

The rising political temperature in the Middle East is another factor when it comes to market volatility. The threat of war with Iran and rising hostilities that impact production, refining, or logistical route for crude oil would affect markets across all asset classes if rhetoric turns into military actions.

OPEC will meet to discuss oil production policy on June 25 and 26, but the meeting to discuss a continuation of the 1.2 million barrel per day cut put in place at the winter meeting in 2018 will take a backseat to the issues facing the world's most turbulent political area.

All signs point to a highly volatile June for markets, and stocks are no exception. The profile of the ProShares VIX Short-Term Futures ETF product states:

The investment seeks investment results, before fees and expenses, that over time, match the performance of the S&P 500 VIX Short-Term Futures Index for a single day. The index seeks to offer exposure to market volatility through publicly traded futures markets and is designed to measure the implied volatility of the S&P 500 over 30 days in the future.

The most recent top holdings of VIXY include:

Since VIXY holds nearby VIX futures contracts and given the inverse relationship between stock prices and the volatility index, a bumpy ride, and correction in the stock market could lift the level of the VIX and the price of the VIXY product over the summer months.

I will be looking to buy VIXY on price dips over the coming days and weeks. Since VIXY is a short-term trading instrument, I will look to take profits on selling in the stock market that causes the VIXY to move to the upside. My minimum risk-reward profile on VIXY will be 1:1 and I will put both a price and a time stop on all trades.

If sell in May and go away reflects the coming market action in stocks, VIXY could be a useful tool for traders looking to capitalize on turbulence in the stock market over the coming weeks and months.

The Hecht Commodity Report is one of the most comprehensive commodities reports available today from the #2 ranked author in both commodities and precious metals. My weekly report covers the market movements of 20 different commodities and provides bullish, bearish and neutral calls, directional trading recommendations, and actionable ideas for traders. I just reworked the report to make it very actionable!

Andrew Hecht
28.23K Followers
Author of Hecht Commodity Report
Weekly commodities commentary and calls, from a Wall Street veteran
Andy Hecht is a sought-after commodity and futures trader, an options expert and analyst. He is the #2 ranked author on Seeking Alpha in both the commodities and precious metals categories. He is also the author of the weekly Hecht Commodity Report on Marketplace - the most comprehensive, deep-dive commodities report available on Seeking Alpha.