The oil and gas (O&G) space has quite a buzz on Seeking Alpha. While much of the industry ultimately revolves around exploration and production (E&P) companies, my focus is geared toward oilfield equipment and service (OFS). More specifically, I have followed the proppant space for some time now and have waited several months to pen this comparison of the largest publicly traded proppant companies: U.S. Silica (SLCA), Covia (CVIA), Hi-Crush Partners (HCLP) (soon to become HCR corporation), Smart Sand (SND), and Emerge Energy Services (EMES) which has been especially battered and recently announced an out-of-court restructuring to avoid a Chapter 11 filing. U.S. Silica and Covia both operate significant industrial and specialty products (ISP) businesses in addition to their O&G proppant business. These ISP businesses' impact on their respective companies will not be explored in this article.

This article comes at a time when share prices are under immense pressure (see two-year chart below). The first blow came in mid-2018 with reports of northern white sand (NWS) being replaced by local brown sand in the Permian Basin. The second blow was our most recent oil price crash in Q4 2018. After a substantial price recovery through early April, shares are at or near all-time lows across the board.

As with all my articles, you should expect a focus on the facts as they have been presented by each company. With that said, I would like to mention that this is, so far as I know, the very first time an author on this platform has objectively compared all of these proppant companies together in the same article. Your feedback about the value of this comparison is greatly appreciated.

While last year marked a decline in proppant sales for Covia and may have marked a nominal decline for troubled Emerge Energy Services, every other producer here sold more product each year since 2016. With 2018 US proppant demand just north of 100,000 tons (see data from Rystad Energy), we can clearly see nearly half the demand was met by publicly-listed companies. Q1 2019 sales figures from these companies suggest acceleration compared to 2018, even while proppant demand is projected to remain relatively flat. 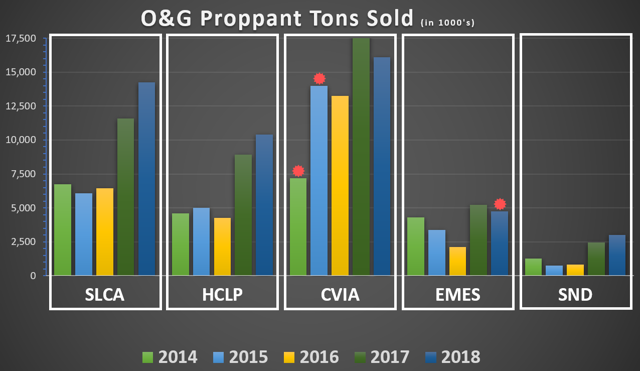 (Source: SEC Filings for each company and the power of Microsoft Excel; EMES data for 2018 excludes Q4 as those figures have not been released; CVIA data for 2014 and 2015 reflects Fairmount Santrol filings, not the combined entity with Unimin for which publicly available data begins with the 2016 calendar year).

In a previous article focusing on U.S. Silica, I urged investors to take adjusted EBITDA figures with a grain of salt. Adjustments should not be, but so often are, normal, expected aspects of the business. Sadly, many of these proppant companies have not been consistently profitable on a GAAP basis and thus adjusted EBIDTA has taken center stage when discussing their financial situation.

Why not EBITDA? Taxes can go both ways from year to year and are not a core element of any business. Interest is simply another obligation. Some companies have much higher interest obligations (because they generally have much higher debt loads), so EBITDA might make their financials look better than reality. For more information about potential drawbacks and cautions related to EBITDA, please hop over to Investopedia.

All of that said, non-cash adjustments make sense because cash flow and GAAP profit are entirely different animals. To that end, I have created two charts below that show both EBDA and EBDA plus non-cash adjustments (equity compensation, goodwill write-offs, intangible asset markdowns, etc.). To start, let's look at GAAP earnings per share/unit.

2016 and 2018 were generally rough years for these companies. While Smart Sand is certainly the smallest of the pack, please note that is the only company to consistently exhibit positive GAAP profit every year since 2014. That is frankly astonishing. 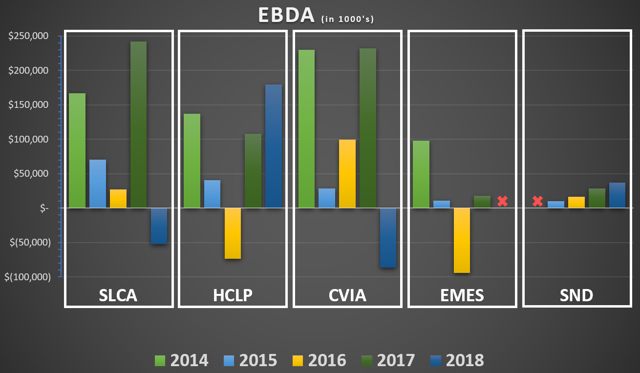 Once we add back non-cash adjustments, U.S. Silica and Covia fare much better in the 2018 calendar year. Another way to think about the EBDA plus non-cash adjustments table is cash flow; however, please note that it does not line up exactly with cash from operating activities. Negative GAAP earnings with positive cash flow are at least tolerable, if not somewhat encouraging. 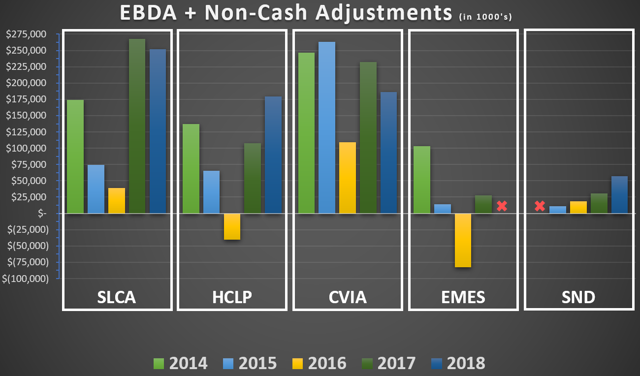 I also created a comparison to show contribution margin, but there's a catch. Emerge Energy Services never adopted the contribution margin reporting scheme. As well, in their 2017 Annual Report, Fairmount Santrol (prior to the merger with Unimin to create Covia) disclosed a change from contribution margin to segment gross profit. In a nutshell, it says that their numbers will look better because SG&A costs will be excluded from gross profit:

In order to level the playing field, after examining both 2016 and 2017 annual reports for Fairmount Santrol, I have reduced segment gross profit numbers by 7% and then divided by tons sold. To adjust numbers for Emerge Energy Services, I have subtracted the cost of goods sold from total revenue, multiplied by the percentage of proppant revenue and then divided by tons sold. 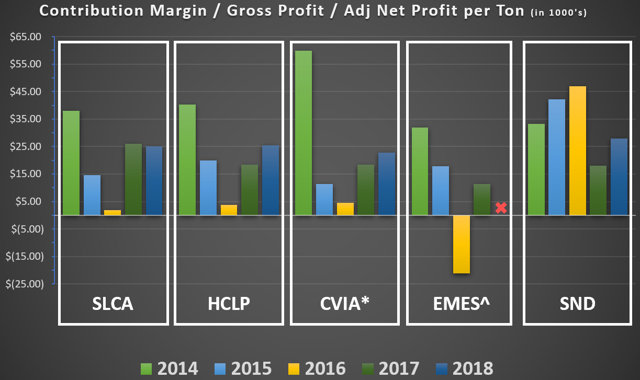 While the contribution margin data look relatively stable between 2017 and 2018, severe price erosion beginning in Q3 makes itself apparent as we examine quarterly figures below. The one exception is Smart Sand, whose Q1 2019 contribution margin figures are off by just 6% from its 2018 average, while contribution margin has eroded significantly for U.S. Silica, Hi-Crush Partners, and Covia. Emerge Energy Services is an unknown at this point due to their restructuring and lack of an annual report.

(Source: SEC Filings for each company)

Even with service offerings like U.S. Silica's Sandbox unit which should theoretically increase profit margins, the road is getting rough to say the least. Rising revenues and declining net income (profit) as a percentage of those revenues is not a good trend. 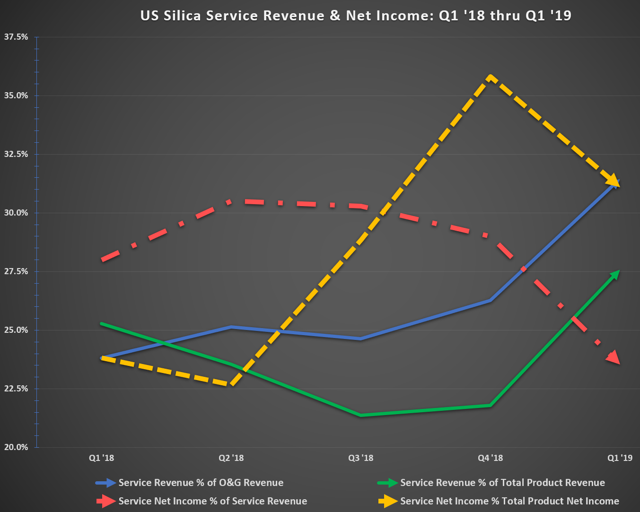 Who knows where pricing will settle (if it settles at all) in 2019 and beyond? We heard from Bryan Shinn, U.S. Silica's CEO on their Q1 conference call that margins may suffer another $1-2/ton due to pricing pressure in West Texas. In short, none of these companies are "safe." While Smart Sand looks like an excellent value with substantially higher margins and overall profitability, continued pressure from oversupply and local brown sand could continue to move the needle downward for NWS and proppant in general. Should oil prices or the market, in general, undergo a correction like we saw six ago or even contract half as much, we should expect a downward trend for oil services companies as well.

Take a look at the numbers below. You can see companies discussed in this article alongside others in the OFS space. Notice any similarities? A number of non-existent PE ratios due to negative earnings, price/book ratios below 1.0, and EV/EBITDA ratios well below 10. Historical 'norms' for these figures might be meaningless.

Nobody can say how these securities will trade through the end of 2019, but there is a lot of money on the table. If you're interested in dipping your toes or adding to an existing position, I strongly suggest using 10-20%+ out-of-the-money options as your trading vehicle. Please also consider the VanEck Vectors Oil Services ETF (OIH), but keep in mind that Schlumberger (SLB) and Halliburton (HAL) comprise nearly 35% of its holdings. 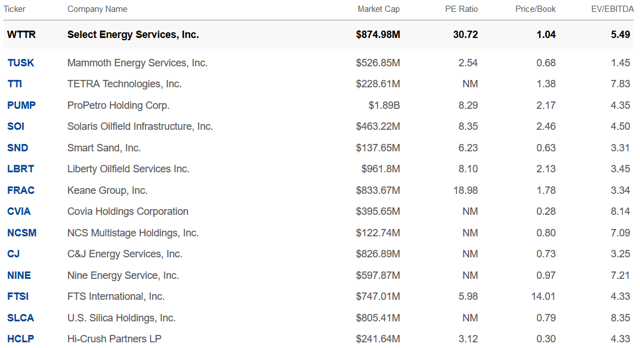 SeattliteTrader
119 Followers
Leveraging the stock market to live my best life, one tick at a time.

Disclosure: I am/we are long SLCA, CVIA, HCLP. I wrote this article myself, and it expresses my own opinions. I am not receiving compensation for it (other than from Seeking Alpha). I have no business relationship with any company whose stock is mentioned in this article.

Additional disclosure: The author makes frequent long and short equity and options trades related to companies and ETFs in the oil and gas services space.