The market has some serious doubts about the proposed acquisition by Occidental Petroleum (NYSE:OXY) of Anadarko (APC). These doubts are well founded. Larger acquisitions are often less successful than smaller acquisitions. Many times shareholders have been told that a large acquisition is successful only to find out years later the acquisition was never successfully integrated, leaving problems that festered until there was a crisis. Nonetheless, this management has a good track record that ought to allow investors to rest easy about the future.

In addition, the market believes that the market overpaid because the reserve value is nowhere near the acquisition price. The Total (TOT) deal is punching holes in that theory though.

Management noted in the 10-K that international reserves were about 10% of total company reserves. Total agreed to pay $8.8 billion for the African assets. These assets represented about 7% of cash flow after capital expenditures and 6% of production. Yet the sales price to Total represents roughly 20% of the acquisition value. Clearly value is determined by more than just reserves.

Anadarko has at least 10 million acres of undeveloped leases in the United States as shown above. If that acreage is worth an average $1,000 per acre, that would be $10 billion alone that is not in the reserve report. Investors can be very sure that Occidental's management examined that acreage before considering any bids on this company at all. If that acreage has a higher average value, then this deal could be an excellent bargain.

Bids have been as high as $50,000 an acre for acreage in the right place. It does not take too much of that acreage for those 10 million acres to average $1,000 per acre.

Anadarko has always had a significant midstream presence. Midstream has no reserves, but it definitely contributes to cash flow.

Anadarko will have a continuing midstream presence even after the merger noted above. The securities value of the midstream merger will be about $2 billion in limited partner units. The cash flow from these midstream holdings will definitely add value to Anadarko. This value can be expected to increase as the production of the company increases.

Occidental pointed out an additional $3.5 billion in savings to add to that cash flow. Even if about 7% or so of the Anadarko cash flow is subtracted out for the sale to Total, the expected cash flow reaches $8 billion easily as a result of this merger.

The initial merger value was $57 billion which includes the debt of Anadarko. The sale to Total reduces that to $48 billion (approximately). The $8 billion of expected cash flow easily makes this merger an accretive deal.

The fears about the preferred stock purchased by Berkshire Hathaway (BRK.A) (BRK.B) are misplaced. That $10 billion of preferred stock has an $800 million dividend payment each year. That dividend will be easily handled by the cash flow. The common portion of the offer will finance another roughly $8 billion at about the 5% or 6% dividend rate. That means that about $30 billion would be financed with debt. Of that, roughly $8 billion of increased cash flow, about one-fourth of that cash flow, will go to the financing of the deal.

If (and that "IF" needs to emphasized) management reaches the merger goals and objectives it has publicly mentioned, this company will practically "mint money". The combined company will generate a lot of cash flow.

Those of us who regularly write about oil and gas know that Anadarko has had more than its fair share of challenges. Many of those challenges are easily avoided and a company like Occidental should be able to "lay down the law" and clean up the mess relatively quickly.

Back in 2017, I wrote that Anadarko Petroleum should be avoided as an investment after a series of careless errors. One of those caused a home to explode. Fellow Seeking Alpha writer Laura Starks provided a comprehensive list in her recent article. The fact is that Anadarko has been known for cutting corners for a very long time. 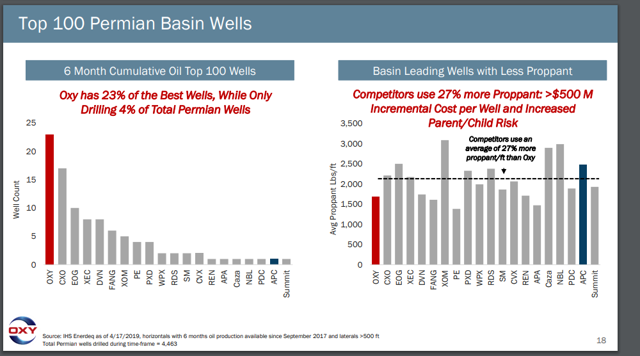 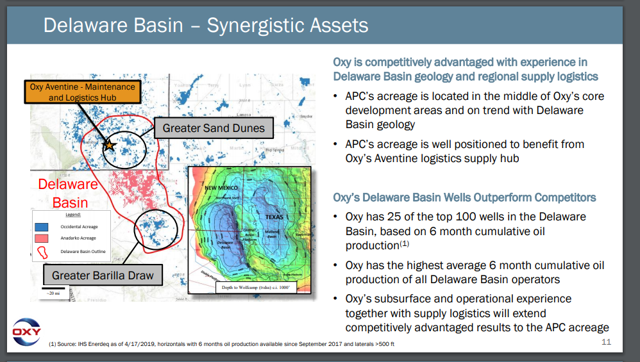 One of the ways to decrease risk is to make a "bolt-on" acquisition. At least some of the acreage acquired in the important Permian Basin would be considered "bolt-on".

Occidental would gain a presence in the DJ basin. That is where Anadarko receives much of its unconventional production. The way to minimize acquisition risk there is to teach the current staff the "Oxy way" while keeping the staff largely in place. A large scale staff turnover would increase the acquisition risk. 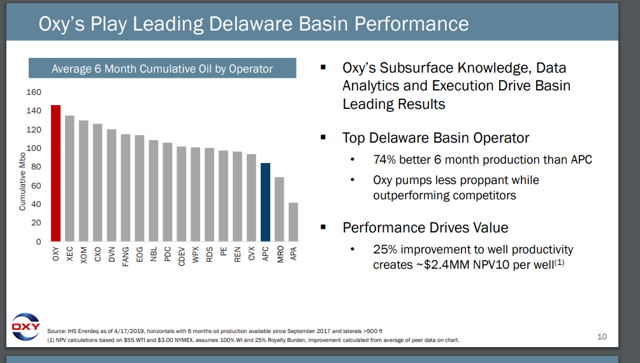 Anadarko Petroleum has had poor unconventional results. Those of us who write about Sanchez Energy (OTCPK:SNEC) know that the poor well results from the property purchased by Sanchez Energy and Blackstone have led to the near insolvency of Sanchez Energy. The decline rate of existing production was so high that Sanchez Energy missed target after target. It turns out that far more money was needed to turn around the production decline than Sanchez Energy management estimated.

There is an excellent chance that Occidental, with far more resources, will make far more money from the Anadarko unconventional properties than Anadarko ever did. It may take some time for this to be obvious because existing production results will dominate over new wells for at least a year.

Occidental probably bought Anadarko for a decent bargain price. There is no question though that the price is extremely high when compared to the latest reserve values.

The risk is high due to the extremely large size of Anadarko. Large acquisitions are more complicated to assimilate, and they take more time. In addition, there is evidence that Anadarko management is not the best in the industry by a long-shot. Therefore there could be some lingering issues to clean up.

However, Warren Buffett tends to be attracted to excellent long-term stories. He did get a better deal than most shareholders because he invested $10 billion. However, he also invests to make a lot of money long term for his shareholders. Those who would believe that the average shareholder would suffer would then also believe that Warren Buffett would make at most 8% per year on his money. Warren Buffett generally has a goal to make more than that or he does not invest. There is no guarantee that he will achieve his goals. But his presence is a vote of confidence in the plans of Occidental management to make this merger work.

Mr. Market has beaten down the price of the stock as he often does during a merger. That probably makes this stock a decent entry point to establish a small position or add to a current position for most investors. The stock could be weak for as long as six months after the merger closes. However, the currently strong oil price should offset some of that weakness. A long-term return of at least 15% as this stock bounces back from the initial acquisition shock would be a minimal expectation. It could be a lot more.

I analyze oil and gas companies like Occidental Petroleum and related companies in my service, Oil & Gas Value Research, where I look for undervalued names in the oil and gas space. I break down everything you need to know about these companies - the balance sheet, competitive position and development prospects. This article is an example of what I do. But for Oil & Gas Value Research members, they get it first and they get analysis on some companies that is not published on the free site. Interested? Sign up here for a free two-week trial.

Long Player
16.97K Followers
Author of Oil & Gas Value Research
Get analysis on under followed Oil & Gas companies with an edge.
I am a high school teacher for a decade. Before that I was an analyst (operations and financial) and for a short time a Controller I have a B.S. with an emphasis in Accounting and an MBA (for which I studied Finance, Economics, and Management) I passed the CPA exam on the first try and am a retired CPA in the state of Maryland. I have a high school teaching credential and an MA in Math Education

Disclosure: I am/we are long OXY. I wrote this article myself, and it expresses my own opinions. I am not receiving compensation for it (other than from Seeking Alpha). I have no business relationship with any company whose stock is mentioned in this article.