Monday June 3: Five things the markets are talking about

Global stocks are under pressure along with bond yields in the first session of a new month, as investors continue to digest the impact of President Trump's threat to introduce fresh tariffs on imports from Mexico. The market has grown nervous about the prospects for global growth in recent sessions as concerns about trade tensions returned to the fore.

US 10-year Treasury yields (+2.08%) have fallen to the lowest in almost two-years with more downside expected to come, while crude oil has extended its rout from May, a month in which saw West Texas Intermediate (WTI) tumbled -16% amid concern over global demand. In FX, the yen (¥108.26) has managed to hold onto most of its late gains from last week.

President Trump's tariff moves against Mexico late Thursday has produced a wave of forecast revisions by the street. Fixed income dealers are now pricing in a -50 to- 75 bps cut in rates by the US Fed in H2, as rising trade tensions drag on global growth.

Expect investors to look to today's data on US manufacturing and this week's non-farm payroll (NFP) report on Friday for clues on how trade concerns are affecting the domestic economy. On Tuesday, Europe's statistics agency will provide fresh estimates on employment and inflation in the region.

On the central bank front, the Reserve Bank of Australia's (RBA) call on Tuesday (12:30 am ET) is too close to call with a rate cut a possibility. On Thursday the Reserve Bank of India (RBI) may well cut rates, while the European Central Bank (ECB), no action is expected (07:45 am ET). Yet the ECB's reaction to Brexit risk and the Sino-US trade war may yet put a greater "dovish" tilt to their statement.

In Germany, markets have drifted lower after the chairwoman of Chancellor Angela Merkel's junior coalition partner stepped down, adding to uncertainty over the government in Berlin.

1. Stocks suffer due to tariff fears

In Japan, stocks plummeted overnight as investors worried about the rising risks to global and domestic growth from a widening tariff war between the US and its major trading partners. The Nikkei share average ended -0.9% lower, the weakest closing level since early February. The broader Topix also dropped -0.9%.

Note: The index-heavy SoftBank Group Corp tumbled -6.2% after the Wall Street reported that the company's bid to raise a second mega fund has met with "cool reception from some of the world's biggest money managers."

Down-under, Aussie stocks slump on US trade tensions with China and Mexico. The S&P/ASX 200 index closed -1.2% lower overnight, reflecting the markets worries that Trump's aggressive trade diplomacy towards China and Mexico could tip the US and other major economies into recession. In S. Korea, the Kospi index rallied +1.4% as the KRW's bounce-back eased concerns about possible capital flight, and as investors hunted for bargains on perception that blue chips have been oversold.

In China and Hong Kong, stocks have started a new month on a 'bearish' note on concerns that escalating trade tensions could increase risks of a global slowdown. The CSI300 index dipped -0.2%, while the Shanghai Composite Index lost -0.3%. In Hong Kong, the Hang Seng index dropped -0.1%, while the Hong Kong China Enterprises Index gained +0.1%.

In Europe, regional bourses trade lower amid trade tensions again weighing after various weekend comments from both China and U.S. In the U.K, the FTSE is underperforming following a weaker than expected PMI release (see below). 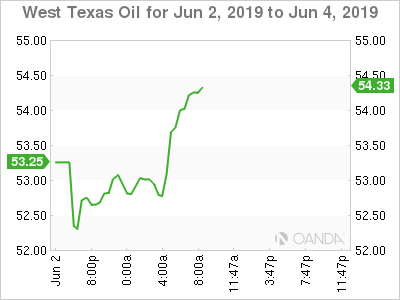 Note: Prices had dropped by more than -3% on Friday, with May recording the biggest monthly loss in six-months.

OPEC+ continues to give assurances that they would continue to manage global crude supplies to avoid a surplus.

Global markets have reeled in recent weeks over concerns that the global economy could stall amid rising trade tensions between the US and China. Fears over trade have been further stoked now that President Trump has announced punitive tariffs against Mexico - a key oil supplier to the US.

Note: Brent crude oil prices have dropped almost -20% from their 2018 peak as global supplies tightened due to output curbs by OPEC+, as well as a drop in Iranian exports due to US sanctions and Venezuelan production. 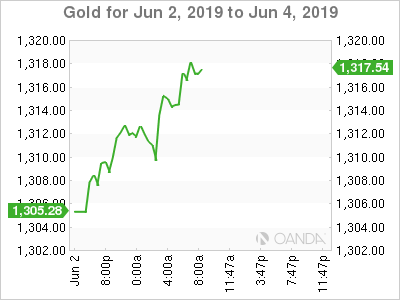 3. Reserve Bank of Australia is set for its first cut since 2016

Down-under, in the last month, Australia has witnessed a surprise federal election result, a further uptick in the unemployment rate (along with an uptick in participation and under-employment) and a speech from Governor Lowe, which has many pricing in the first rate cut since August 2016. However, with a slam-dunk rate cut priced in, expect investor focus to fixate on the banks forward guidance.

Base case: A -25 bps cut with a nod to at least one further cut (possibly in Lowe's evening speech).

Dovish case: Any suggestions that easing above and beyond the previous assumed -50 bps of cuts needs to be implemented to support the labor market and/or GDP growth.

Hawkish Case: A "wait and see" approach on the back of the assumed cut to see how the outlined macro measures feed through into housing and consumer spending. 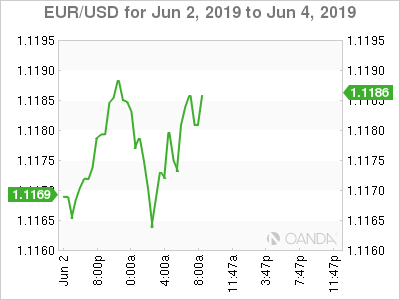 4. Dollar direction to be dictated by week events

Last week saw the USD index come under pressure as the Trade war remained the focal point. This week's events do not change anything - President Trump is visiting the UK and other events ranging from non-farm payroll, ISM releases and Fed Chair Powell speaking Tuesday are expected to influence direction. Also making it a tad more difficult for FX traders is the yield in the US 10 years reaching two-year lows and encroaching on the +2.05% handle.

EUR/USD (€1.1176) trades within striking distance of the psychological €1.12 now that €1.11 handle held twice in the past fortnight. With BTP's and Bund futures trade higher today as the markets continue their "risk-off" theme started a few weeks back. The 'single' unit is expected to remain quiet this week, at least until we will see the ECB rate decision on Thursday (07:45 am ET) with focus on the staff projections and any details on TLTRO-3.

GBP/USD (£1.2640) trades above the £1.26 handle after briefly trading below last week. The UK is hosting Trump for a three-day state visit and he is expected to meet with Boris Johnson, a favorite for the PM position. The pound was unmoved from this morning's disappointing UK PMI manufacturing data, which went into contraction for the first-time since the June 2016 Brexit Referendum. The Bank of England's (BoE) Governor Carney is scheduled to speak Thursday, which could see some market moving comments. 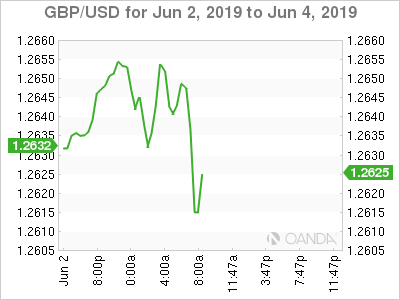 At 49.4, down sharply from 53.1 in April, the headline seasonally adjusted IHS Markit PMI fell below the neutral 50.0 benchmark for the first time in three-years.

The total volume of new business placed fell for the first time in seven-months, while the rate of contraction was the greatest and fastest in a number of years. New order inflows deteriorated from both domestic and overseas sources, while new export business fell for the second month running and at the quickest pace in nearly five years - manufacturers reported a lower demand from Asia and Europe.

There was also mention of Brexit uncertainty, including clients diverting supply chains away from the UK, leading to lower demand from within the EU. 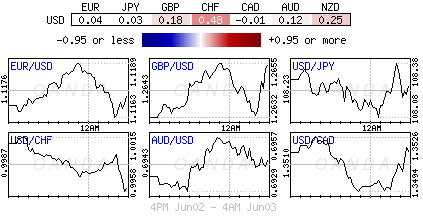